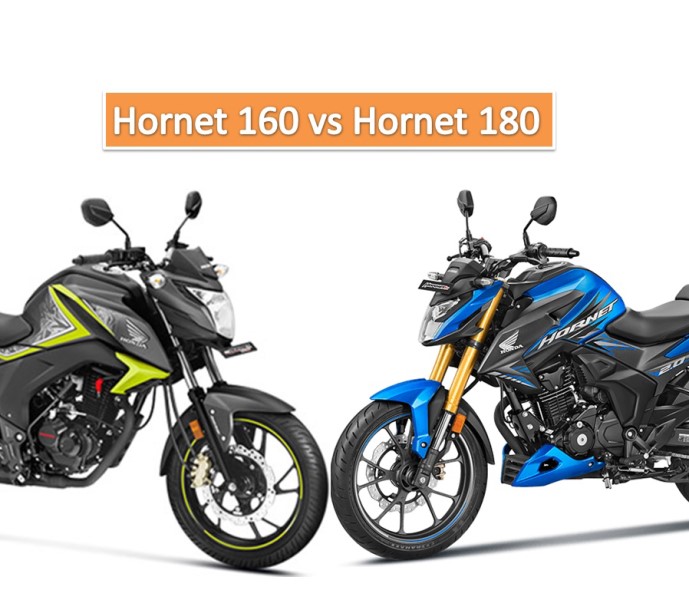 Hornet 180 vs Hornet 160 – we list all the major spec differences between these two iterations of the Hornet.

Honda recently launched the BS6 version of Hornet, dubbed as Hornet 2.0. While the motorcycle is heavy on features, it has received mixed reactions from the fans.

Today, in this story, we shall be comparing the new BS6 Hornet 2.0 with the older-gen BS4 version, and list out all the differences.

The most significant difference between the two motorcycles is undoubtedly the engines. While the older gen Hornet came with a smaller, 162.71 cc air-cooled engine, the 2.0 version comes with a bigger 184.4 cc motor. Also, the BS4 version was powered by a carburetor, while the BS6 version comes equipped with a PGM-FI (fuel injection) system.

Design is the most noticeable visual difference you can observe. The Hornet 2.0 gets all-new styling and looks sportier with the latest update. It gets sharper lines and curves that make the bike appear more muscular.

Honda is promoting this feature massively, as the BS6 version gets upside-down forks at the front, as compared to the older gen’s conventional telescopic suspension set up.

The Hornet 160 also came with LED headlamps and tail-lamps but it had conventional bulbs in the indicators. However, the new 180-cc version gets an all-LED lighting package, which is a nice touch!

With the new update, Honda has replaced the older instrument console with a more modern unit, which now looks similar to the one found on CBF 190R sold in China. It is to be noted that both the versions are equipped with all-digital clusters.