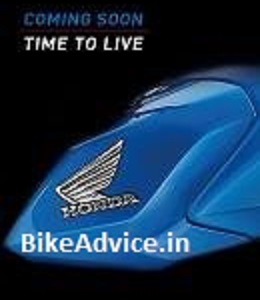 Honda Motorcycles and Scooter India, in an official communication, has asked us to block our dates for July 10, 2015. While there is no other detail in the email, it does say that the manufacturer is going to unleash a ‘Brand new product’!

After a plethora of facelifts and minor cosmetic touch-ups promoted as ‘high voltage launches’, Honda has intentionally used the word ‘Brand new’ to push up the falling interest levels. It confirms that this will be something which is not in Honda’s current portfolio. This takes us closer to the First-on-the-web story we did on 29th June. Honda has been teasing what looks like a commuter motorcycle and it may be the Livo that has been snapped testing a few times earlier in camouflage.

The blue coloured fuel tank in the teaser sports the familiar 3D Honda emblem in chrome and it appears to be a commuter. If it is Livo, then it is expected to replace the CB Twister from the range, production of which may have been stopped considering the sales it has been doing for the last few months.

Without any further speculations, let us wait for some more dope or probably the motorcycle itself….