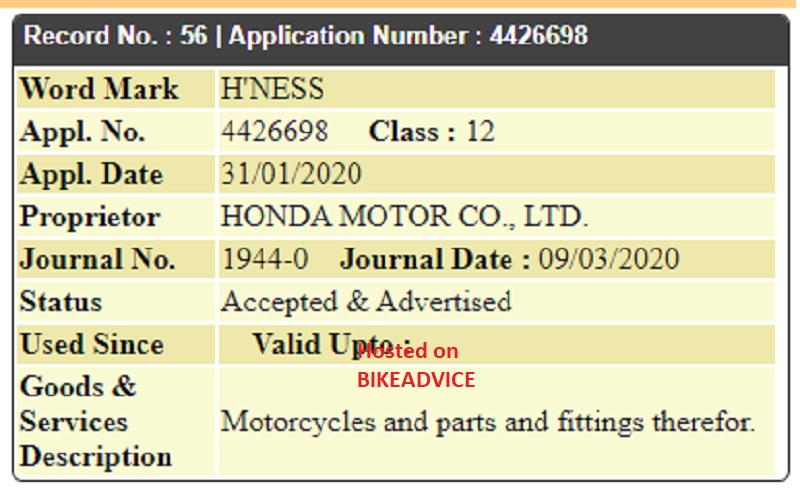 Honda H’NESS will be a cruiser motorcycle that will rival Royal Enfield. However, since it will be launched under BigWing, it won’t be cheap…

Honda surprised everyone by announcing a new launch on 30 September 2020. It is building a lot of hype around it but not much of it has been revealed yet.

All the promotion has been built around the term ‘HIGHNESS’ like

And a big probability – in fact it is almost a confirmation – that the 30 September 2020 motorcycle will be called as ‘H’NESS‘ – a short form of Highness!

In reality, Honda wanted the full name ‘Highness’ and it applied for its patent in February this year (See pic below). However, it was opposed and Honda had to ditch it. It, then, filed for its version – ‘H’NESS’ in March which was accepted. H’NESS will be pronounced as Highness.

That reveals the name of the motorcycle ahead of the time when Honda wanted us to know it. We have already heard how it sounds. If you don’t you can listen to its exhaust note in the following video..

It is almost a given that it will be a cruiser’ish motorcycle that will rival Royal Enfields. Honda has shared that H’NESS will be launched under the BigWing umbrella which means that it will be positioned as a premium motorcycle.

Engine specs, its design and other details are well kept secrets till now. But we hope to dig at least some of them in the days to come – ahead of the launch! Stay tuned…