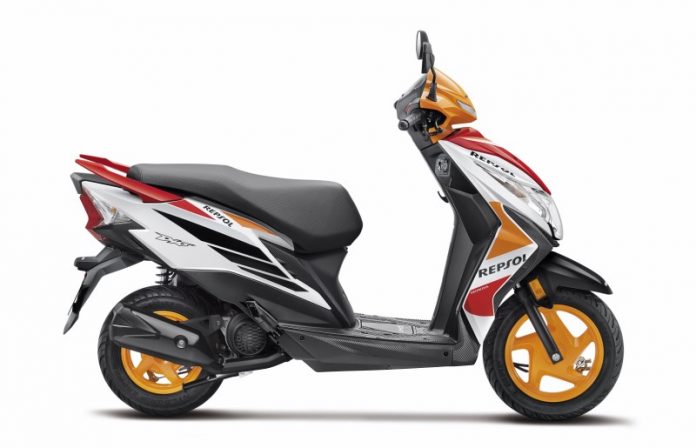 Honda DIO Repsol Edition is a special version of the moto-scooter that is inspired from the company’s racing team. It gets a new color shade…

Apart from the special edition of Hornet 180, Honda has also officially announced the launch of a limited edition of its moto-scooter Dio. Called as the Dio Repsol Edition, it is inspired from Repsol Honda – Honda’s Racing Team.

The limited edition DIO comes in a tri-color theme of white, red with orange ascents. The wheels are also painted orange accentuating the scoot’s sporty styling.

Apart from the fresher paint scheme, the new Dio continues with the same mechanicals – which means it carries over the same 110cc, fuel injected engine which can produce 7.76 PS of peak power at 8000 rpm and 9 Nm of max torque at 4750 rpm. This is a new engine that Honda has developed for its Bharat Stage 6 compliant scooters.

SPIED: Days Ahead of Launch Husqvarna 401 Spotted Testing in India

Now View & Park Apaches in Your Drawing Room Through TVS...