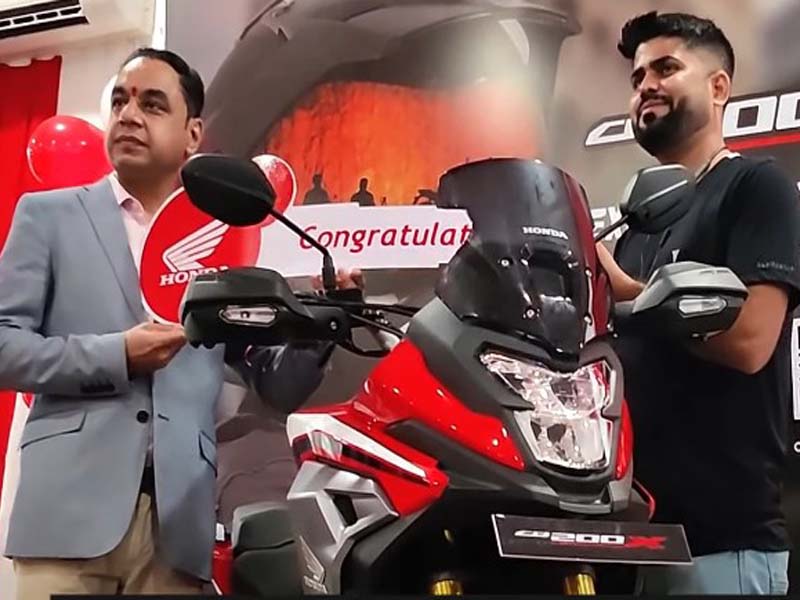 Honda CB200X deliveries have started in India. Gradually, the motorcycle will be available at all Red Wing outlets in India…

As promised Honda Motorcycle & Scooter India has begun the deliveries of the new CB200X in India to the customers. CB200X Is being shipped from the conventional Red Wing outlets.

The first Honda CB200X was handed over to the customer at the Faridabad Honda situated dealership. A Youtuber took delivery of his motorcycle in the presence of Yadvinder Singh Guleria, Director- Sales & Marketing, Honda India.

The CB200X is priced at INR 1,44,500 (ex-showroom, India). It is offered in three different color options – Pearl Nightstar Black, Matte Selene Silver Metallic, and Sports Red. It is the Sports Red that is seen here.

The CB200X derives its powertrain from Honda’s streetfighter Hornet 180. The entry-level adventure tourer is equipped with a 184cc PGM-Fi engine that delivers 17 bhp of power and 16.1 Nm of peak torque. The engine is mated to a 5-speed gearbox.

The new Honda CB200X sits on a diamond-type steel frame. Honda has equipped the adventure bike with front USD forks and a rear mono-shock.

Among other features, the CB200X offers complete LED lighting at the front and the rear, fully digital instrument cluster, engine stop switch, hazard switch, split seat, upswept exhaust, engine cowl. The braking on the Honda CB200X is managed by a single-channel ABS.

Honda is hoping that the CB200X will carry forward the legacy of the CB branding. The ADV can prove its worth as an everyday commuter and serve as a rugged machine for longer trips.

We will be riding the motorcycle later this month to see how different is it from the Hornet.