Dear BikeAdvice readers, I said in my previous post that I will be writing a review once I am done with the run-in period. Here I am with a comprehensive road test of May 2010 Honda CB Unicorn. Everybody knows how silent the engine is compared to others, there is no denying the fact that this engine is a great piece of engineering if I am not wrong the engine has already achieved a cult status. I use the bike for office commute and weekend long roads. My office is 26kms from house and I normally ride hard. 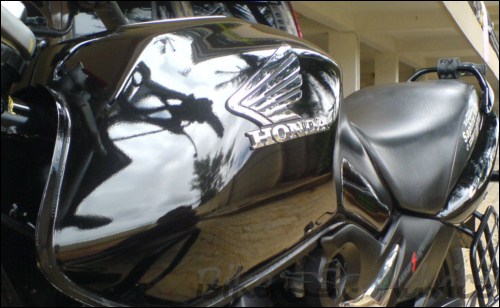 Till first service I had to do a thorough run-in of the engine and I followed these steps:

I faced few issues during my run-in like the hard suspension, hard gear shift (sometimes), vibrations during braking etc. I never took my bike to SVC, gave the bike sometime and as the mileage meter (Distance covered) progressed everything started falling into right places.

Once the bike was done with the first service I was ready to explore it. I stay in Bengaluru and there are lot of city developments happening like the metro-rail and flyovers which has contributed to many potholes, bumpy service roads, and to add enters rain god (Monsoon) which all the more makes things bad so I had all the tough conditions to check/test my bike.

A week passes by and I had enough reasons to smile, my bike just sails through such roads thanks to a great ground clearance of 179mm and a fantastic mono-shock. This bike weighs around 146 kgs which gives great stability to withstand crosswinds which play a major part to the performance. I could ride beyond 70kmph when it was raining heavily and could see RTR’s and Pulsars slowing down, thats when I felt good about my bike it was not rock solid as a Royal Enfield but I could travel quite positively(GS150R too is quite good).

Things are not always easy when you are riding at high speeds in city limits, I learned my lesson my rear tyre slips for the first time and does a zig-zag but somehow managed to balance it call it luck or give browny points to the stability I don’t know, the choice is left to the readers.

So overall I have had good 3months of city ride till now and speaking of adreline rush yes I hit the long roads. I want to ask this to every rider what has been your cruising speed? I mean to say, the speed which doesnot stress your engine yet u are travelling fast.

To my surprise the cruising speed has been 80-85kmph without any vibrations and you can go on and on. I have ridden 2hrs non stop and have never felt any problem with my back or the freshness on my face hence I can easily say that it’s also a tourer because I think every long ride will have a pit stop after 2hrs but if you ride with your arms outstreched like a pulsar or RTR who’ll experience sore arms.

And when I take the bike for second service the mechanic tells me “Apke bike ka nut bolt dhila ho gaya hai” (The bikes nuts/bolts have become loose they need to be tightened), smiling I knew I had tested it on quite rough conditions.

The top speed achieved after second service is 110kmph i.e the speedometer (analog) is divided into 5 intervals for every 20kmph and I covered 2-3 intervals beyond 100kmph, considering some speedo error I would say I have touched 105kmph at 8200RPM, some bikers claim to have even touched 120kmph but I don’t want to overstress my engine and distribution of power was quite good I touched 85kmph on 4th gear and rest was covered by the top gear hence you won’t feel the engine stressed be it climbing a hill or a flyover.

So the test report goes like this, ratings are with respect to the current 135cc+ bikes in the market.

The engine produces 13.3bhp of power and 12.8N-m of torque but in city limits with sigmals all around we hardly use such power. The bike has enough pickup to keep you upfront, being the first depends upon your biking style. On my way to office I have a strech of some 5-6kms which doesnot have any cross roads and this is where I touch 90 without much stress and as for the vibrations I haven’t experienced them to shake my mind, though the bike has noticeable vibrations at 1300-1600 rpms.

But How much vibration is a vibration for a person? I feel GS150R vibrations at speeds of 75+ so you guys can figure out my senses.

The bike is known for its refinement so I won’t write much on it. The engine sound reduces as you shift to higher gears and at top gear you will feel like the engine has gone to sleep mode. The engine sound is far less compared to any of the bikes in the market. 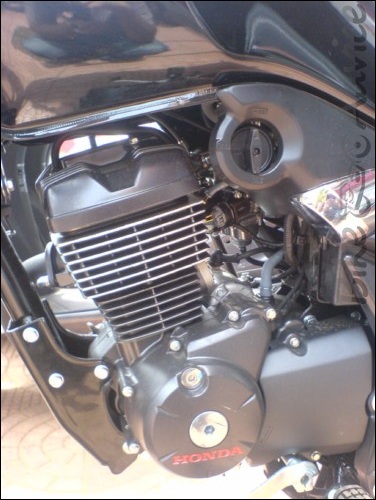 Bengaluru is a happening city, full of noise pollution but my bike plays a small role to reduce some noise with its silent engine sometimes I cannot hear the engine sound in signals and honks at a permissible limits not like a Pulsar which doesnot alert but irritates fellow riders. The engine used to heat up quickly during run-in but as it settled down the heating subsided so nothing to worry fellow new owners.

The bike has a front disc brake and drum at the rear. The disc brake is not as effective as a Pulsar or a RTR, but the brakes are just fine for cruising and if you can judge the braking distance even better. I make it a point to keep the disc dry and clean.

It has a telescopic front and a advanced Mono-shock rear suspension with two modes of setting HARD and SOFT, I haven’t changed the factory settings yet. Initially they were hard I used to feel the bump quite hard on my back and abdomen but now they are into there charismatic character. I would say don’t adjust the settings just give it some time.

The bike comes with MRF zapper tyres which are quiet efficient, till now I have filled the tube twice and the tuff up tube can handle a nail for atleast 2 months experienced by one of my collegue.

Well this section is very subjective but overall the bike is nicely designed though not very aerodynamic. The design is more sophisticated/elegant looking than sporty or funky. 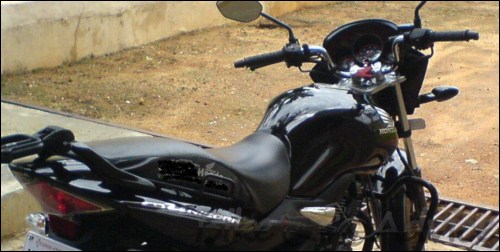 I have got the efficiency figures of 51 and 50 before and after the first service respectively which according to many would be a tad less.The only reason is the way I ride it, I touch 85kmph almost everytime I take my bike out to office but you get good mileage only if you ride between 40-60kmph.

I havn’t faced serious problems with comfort of riding but sometimes I have to re-adjust my seating area due to potholes or bummy roads but never faced that issue with a Hunk or RTR. As for the pillion comfort my friend tells me that he loves sitting on my bike and I agree to him because I too experienced the same during my bike research days.

So to sum up things following are the positives apart from the above mentioned:

And on the flip side

In all I have enjoyed every single ride on my bike be it a 2km ride to get medicines or a 100+km jolly trip just to get out of the city crowd and enjoy the nature. This bike on most occasions will not let you down if you can compromise on digital goodies and great racing pickup. If you like the bike its worth the wait to get hands on it.

Thanks for reading enjoy biking and be… A Wing rider. 🙂