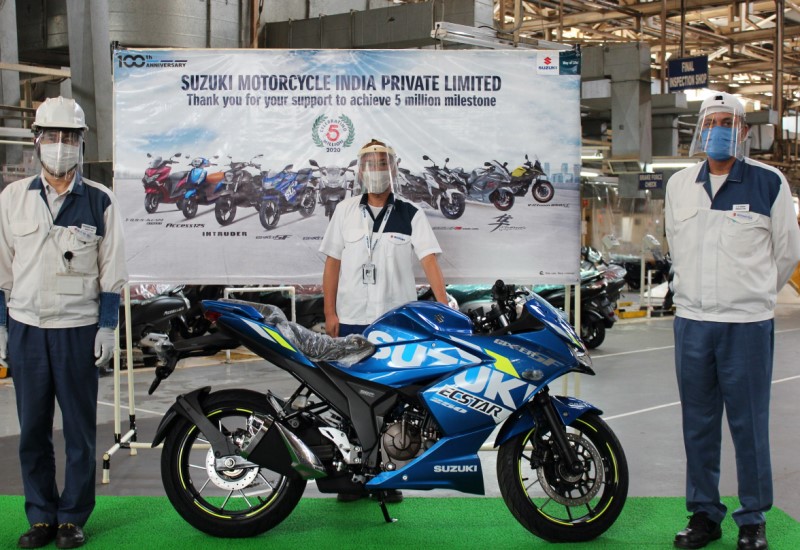 The company was also among the least affected two-wheeler manufacturers in India in the last financial year.

Suzuki Motorcycle India, the Indian two-wheeler unit of the Japanese automaker – Suzuki Motor Corporation, has announced that it has rolled out the 5-millionth motorcycle from its manufacturing facility in Kherki Dhaula, Gurugram.

The motorcycle to become the 5-millionth vehicle from the plant was the BS6 version of the Suzuki Gixxer SF 250, which was launched recently. You can read its details here. Talking on the occasion, Mr. Koichiro Hirao, the Managing Director of Suzuki Motorcycles India, said that they achieved the milestone when the company is celebrating the 100th year of its existence.

The company has been present in India for 14 years now. Some of its models, like the Access 125, Gixxer, etc., have become quite popular in our market. It is also worth noting that Suzuki Motorcycle India was the least affected motorcycle maker during the last financial year when all the other automakers in India were struggling to maintain their sales numbers.

The company ended the last financial year with a 5.7% growth as compared to the previous year. Suzuki currently has over 530 dealerships across the country, and it recently launched the ‘Suzuki at your Doorstep’ program, which is a doorstep sales and aftersales service online platform. The service has its reach in over 279 cities.