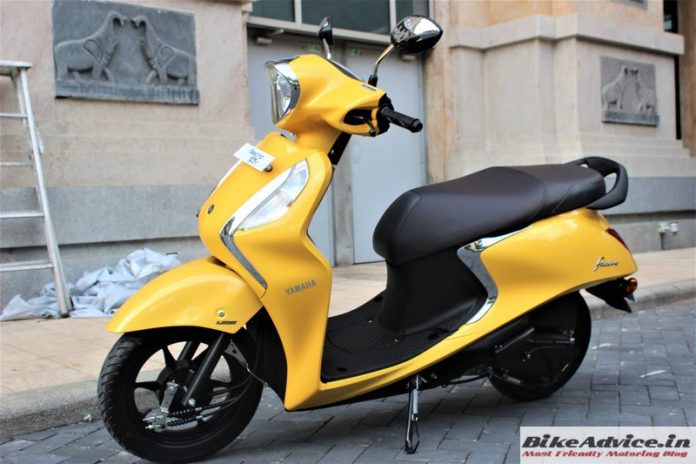 Yamaha recently unveiled its first 125cc scooters – Fascino and Ray ZR. The surprise was the discontinuation of the 110cc (113cc to be precise) scooters from the lineup. This means that Yamaha intends to convert all of its scooter sales to the new, bigger engined scoots, which could be a significant task, as it appears.

Nonetheless, at the press event, Yamaha revealed some official performance data for both these engines and it highlighted the performance gain the new engine will have over the other.

Before we share that, let us quickly talk about the important numbers.

Engine Capacity – As compared to the 113cc older motor, the new engine displaces 125cc which means it is 7 percent bigger.

Weight – Yamaha informs that it has developed an all-new frame for its new-generation scooters which has resulted in a significant weight drop. The new Fascino now weighs only 99 kg as compared to 103 kg of the older, smaller scoots – 4 percent reduction.

As a result of all of this, and the inclusion of fuel injection, Yamaha’s 125cc scooters are claimed to offer a significant on-road performance gain. Here is what Yamaha claims…

10 Degree Hill Climb – Fascino 125 is significantly quicker (owing to higher torque) in acceleration on a 10 degree hill climb. It will leave a 14 bike length distance equal to 26.6 meters against its 113cc counterpart.

So, it appears Yamaha has really thought this through and the 125s are its best foot forward in the scooter segment so far. Fascino’s price has been revealed (link to report) but the Ray ZR is yet to be officially launched in the market (details). Here is a quick preview of the new Fascino.