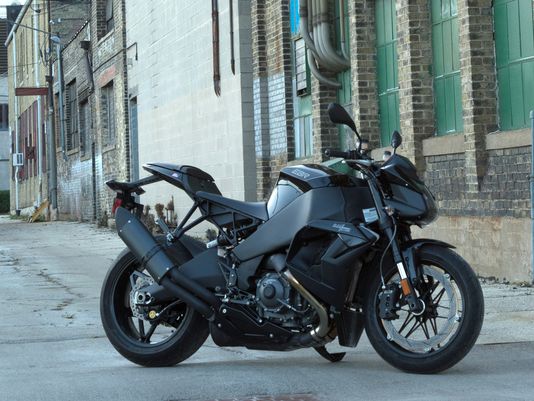 The EBR Black Lightning has been revealed days before its official launch. To be present at the Long Beach Progressive International Motorcycle Show, the bike sadly is not something ground breaking. Rather a juiced up version of an existing product.

Days after news started trickling out about a new motorcycle from the house of Eric Buell Racing, the bike is finally out. While Black Lightning is a name which a lot of manufacturers have been trying to get trademarked for their products but have not been able to do so. One of the most famous attempts was the one by Harley Davidson, who are coincidentally EBR’s former owners.

EBR not just successfully managed to get the name approved, but also got the bike on the stage. But what is it? Essentially a lowered version their street fighter, it is powered by the same 1,190 cc V-twin liquid cooled mill churning out 185 hp of maximum power at 10,600 rpm. The torque output has not been mentioned but we expect it to be the same 137.8 Nm at 8,200 rpm.

EBR however adds that the Black Lightning gets revised gearing which has improved the torque delivery and acceleration. Thus, making it more responsive for street riding. The bike also gets a lowered seat height, lower foot pegs and higher bars. An optional comfort seat is also available to create a new riding position for a wider range of performance capabilities at a variety of speeds.

Yes, this is the ‘Quick, Dark and Low’ motorcycle EBR had been teasing about for urban street riders. Deliveries of the EBR Black Lightning will begin in Spring 2017.