Red Wing decides to hit back hard!! Or so it appears, according to what we see below. 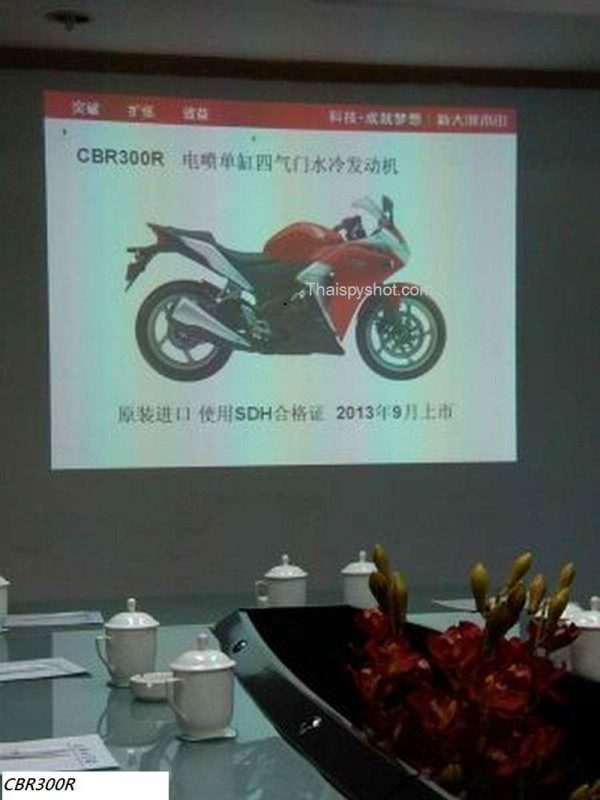 Few days back, our Indonesian counterparts stole the thunder with a “Facelifted-and-Transformed” P220. Now its time for the Thais to make news, this time with a bigger bang! Thaispyshot.com is something you might not have heard if you are an Indian. Well, they are probably something to be on the lookout for! Why??
Because their moles seem to have penetrated “Red Wing’s” corporate hierarchy itself!!

The snapshot doing the internet rounds shows a corporate boardroom. The meeting’s over, the BlackBerry-toting guys have probably left in their chauffeur-driven cars. Everything’s spic-and-span, from the teapots to the….Wait! Are those wild orchids?? Corporate-Style Precision…everything’s just perfect…nothing more, nothing less!!

But wait!!… (Yes…again!) Something’s not right…who has left the projector on ? It’s still throwing the image to the wall….Oh no Honda! Business secrets are out!! You can almost picture the mole entering the room, stealing glances here and there. A tottering old man probably in his sixties, employed to serve tea and snacks, he flips out a spy-camera from his spy-pocket. Few clicks are taken, no matter how grainy they are, and the mole’s on his way out. Mission Accomplished!!

Interesting, isn’t it??? Well, even more interesting will be the pitched battle between the Japanese giants Honda and Kawasaki if the former ever decides to give its quarter-litre Ceeber a bore-and-stroke job!!

Few years back, the Ninja 250 was on a swansong. A good learner’s bike, it suited those novices who just hadn’t realized that with every additional degree of throttle-twist and lean, danger lurked close-by. It also entertained those pros who liked to milk out the last iota of power, without having to fear being punished by the bike.

Alas, the CBR250 R came, albeit looking more like a VFR. Nevertheless, it was stylish, aggressive and could cover the highways without breaking a sweat. Most importantly, it offered all these without breaking the bank!! The Ninja’s territories thus started dwindling, and a typical High-Handed Kawi retort came promptly in the form of a 47 cc increase in displacement.

There’s no communication from Honda, and things look to be in a very early stage if we go by the picture. Honda might decide to upgrade the mill without even touching the bodywork, but it’s still a lot speculative. There’s something written in Mandarin, along with a few numbers. Our enthusiastic Indonesian brothers have already baptized the CBR300 R, claiming September 2013 to be its rollout time, from the numbers “2013” and “9” that are clearly visible in the snapshot.