There’s no denying the fact that Bajaj Pulsar 220 has a near-cult status in India. Tagged for quite some time as “The Fastest Indian”, it was Bajaj’s “Golden Goose” until a naked-alien-robot emerged from their stable. 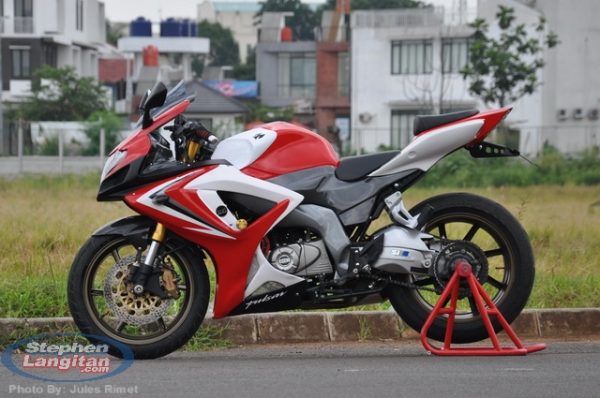 The just-a-tad-short-of-quarter-litre mill churns out an amazing 21 horses, and a top whack of 144 kph is claimed by the Chakan-based automaker. The Pulsar 220 has the looks to kill, the Semi-Fairing equipped with a Projector Lamp setup being the cynosure of all eyes. Bajaj offered fuel-injection on it for a period of time, but it was rolled back to lower costs.

However, Pulsarmaniacs have pitched their voices against the shared-gene-pool with the smaller siblings which are powered by 150cc and 180 cc mills, as well as a now-defunct P200 Dts-i.

Looks like one of our Indonesian counterparts reiterate the viewpoint, and have decided to take matters into their own hands. We stumbled upon a fantabulous click of what-appears-to-be a modified Pulsar/Rouser 220 ( Yeah….that’s what it’s called in Phillipines ! ) 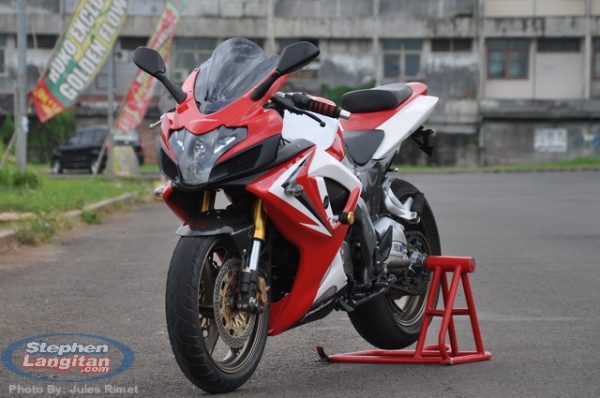 If the page’s claims are to be believed, then the backbone of this “Mother-of-All-Modded-Bikes” is an Aprilia Deltabox Frame. The fairing, fuel tank and body panels are reminiscent of Suzuki’s 600 cc Gixxer. The faux air-intakes in the front section create an illusion of a much-bigger engine, but don’t get fooled. We bet our ass the mill is bone-stock, with Bajaj’s crankcase peering out from under the cowling, and it still screams the same, old “Bajaj DTS-i Powered”.

It seems Yamaha R6’s inverted-down forks as well as front discs have been summoned to stand guard at the front. The modifiers also seem to have dismantled a Honda RVF400, the swingarm and the rims speak for themselves. The rubbers are claimed to be from Michelin, 120/70-17 and 180/55-17 gripping the front and rear rims respectively. 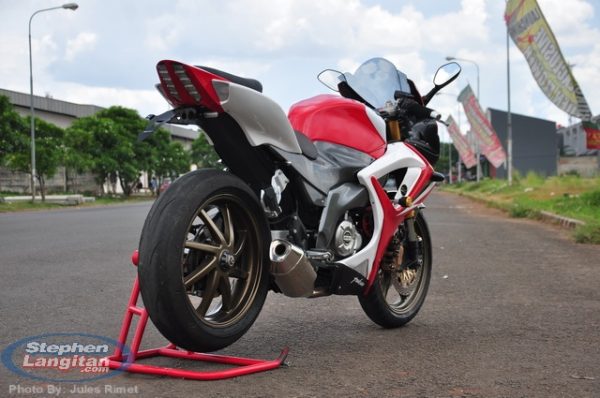 The modifiers have not been big fans of the idea of retaining the big all-aluminium exhaust of the P220. A much shorter and more-menacing looking exhaust tip, probably custom made for a CB 1000, does fit into the racier scheme of things. It’s definitely sure to turn the heads of your neighbours, if ever you get your hands on this bike and crank the starter early in the morning.

Bajaj’s “Wolfish” Projector Headlamp setup is the only arrangement which provides a déja-vu, along with the much familiar twin LED stripes at the rear.

Pulsarmaniacs, what do you feel ? Should you be shooting those sugary e-mails to Bajaj’s inbox, reminding them of a much-needed makeover ??

If you feel the same, stop facepalming yourselves. Your next click should be on the “Compose” button.