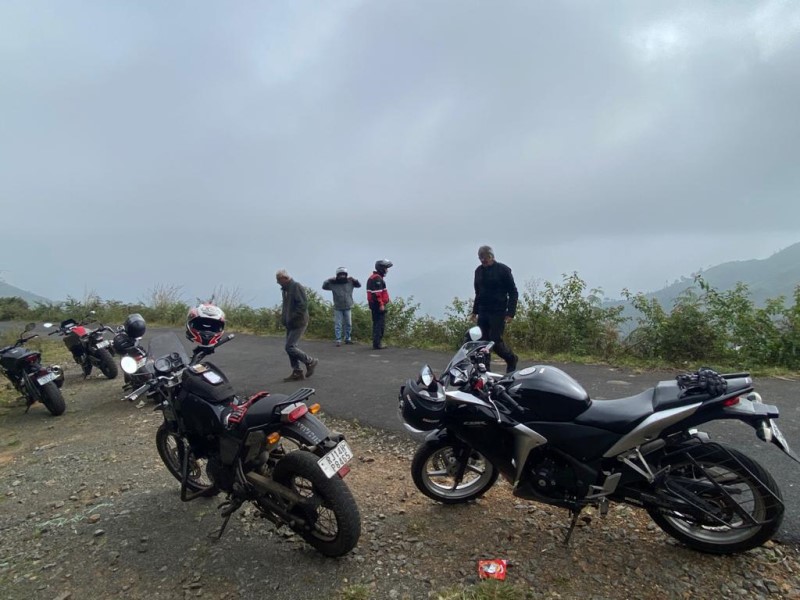 With the main thoroughfares thronging with tourists, any avenues leading to Palani or Batlagundu were ruled out. It wouldn’t be any fun at all: lines of cars and bikes, waiting to pass the tollgate, snaked all the way down to Tiger Shola a mile away. We, on the other hand, wanted a quiet stretch of road for undisturbed riding; something away from the madding crowd. After some deliberation we decided on the road to Pulioor.

The road to Pulioor from Kodaikanal starts with a six-kilometre ride to Vilpatty – which is the largest panchayat in Tamil Nadu and the second largest in the country – before making a sharp left to the hamlet of Kovilpatty. After that, the narrow road with its veneer of tarmacadam (if it can be called that), leads to a dead-end at Pulioor. It is as delightfully quiet as it is scenic.

The ride traverses a valley overlooking Pethuparai. On a clear day it offers a magnificent view of Palani, and the Palani Temple can be clearly viewed through a pair of ordinary binoculars. However, while the sun blazed over Kodaikanal, white clouds blanketed the plains.  As the sun grew stronger, this somnolent cover, irritated by scorching heat, began to stir. Rising in a thin veil of protest, it turned to fine mist and blocked the view to the depths of the valley.

Undeterred, we arrived at Pulioor.  There were five of us in all.  I led the pack on my Honda 300 CBR, followed by Joe Antony on his Enfield Bullet. Mac and Kishore kept Varadhu company, mainly to ensure the borrowed, dilapidated Himalayan didn’t pass out en route.  Mac, riding his son’s sparkling BMW and Kishore on his CBR250R, took turns passing one another, keeping a sharp eye on Varadhu all the while.

Varadhu ploughed on stoically, atop a bike that looked akin to something off the scrapheap.  It really was held together, courtesy of a thick coating of rust from end to end! Nevertheless, we got to Pulioor safely.  Getting off our metal steeds, we proceeded to walk to the edge of the hill.  The mist had now lifted and we caught a glimpse of Pethuparai.  The mist kept rising, rewarding us with a panorama that encompasses Elephant Valley and the entire land below Perumal Peak.

It was warming up.  Enthralled with the view we gazed at the valley and the lands on the far side.  Meanwhile, Kishore had struck up a conversation with two desultory ladies, ostensibly collecting reeds for export to the Middle-East.  These would be attached to plastic handles and turned to ‘organic’ brushes for sweeping floors.  I don’t know but perhaps these plastic handles are organic too!

With the arrival of young Ganesh, all of seven or eight years old, the conversation took on an entirely different tenor.  On leave from his boarding school in Shembaganur, he was more than a match for Kishore’s wit and repartee.  It was getting too hot for me though, in my Joe Rocket bike jacket, so I started walking back to the bikes.  I ruminated on the word for cat in Tamil – Poonai.  Puli, however, is something quite different: it spells Tigers and Leopards and obviously how this remote habitation was named.

An old lady resting near our bikes told me that there were indeed many leopards there in the old days.  She said that, every once a while, there were reports of sightings of these big cats.  She too had seen a black panther once and was sure it was still around.  With that she left me ruminating on leopards and black panthers – both from the Panthera Pardus family.  Amazing how they got on: one with rosettes on a tan skin and the other jet black.  I wondered if we could all take a lesson on how to get along with one another, irrespective of our colour and caste!

With that I wish all my readers a belated Merry Christmas and, of course, a VERY HAPPY NEW YEAR!