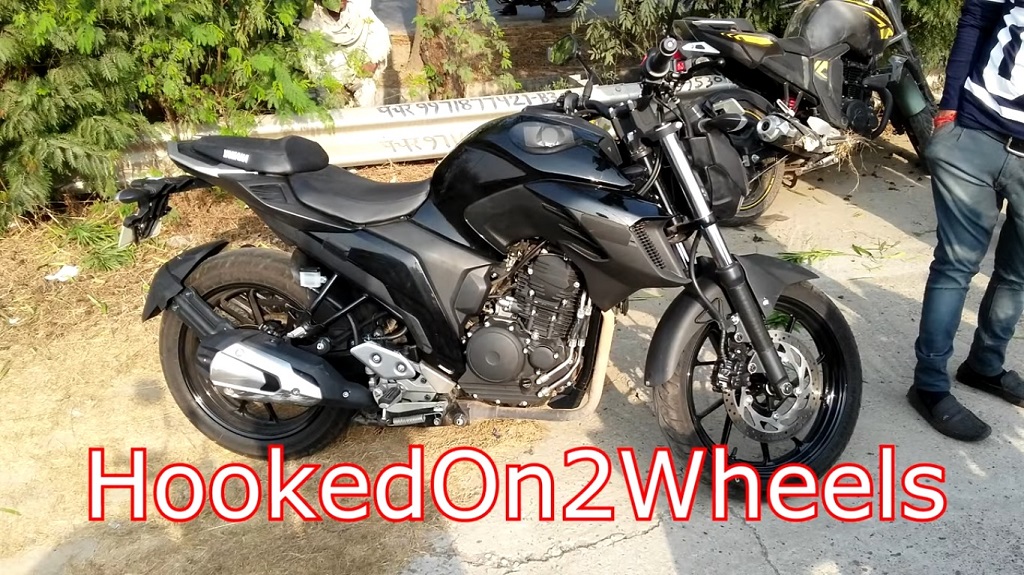 So, while the country’s bikers are rejoicing Dominar 400’s pricing there is another very interesting development coming from Yamaha’s headquarters. They are preparing a naked motorcycle which carries a near 250 cc engine and could very well be called as FZ 25 (FZ 250 or FZ 200). And after a couple of disguised spottings, and the one undisguised picture set from Rushlane.com (pics featured on this page), we have a new video by Hookedon2wheels, screengrabs of which give us the best view of the motorcycle yet. 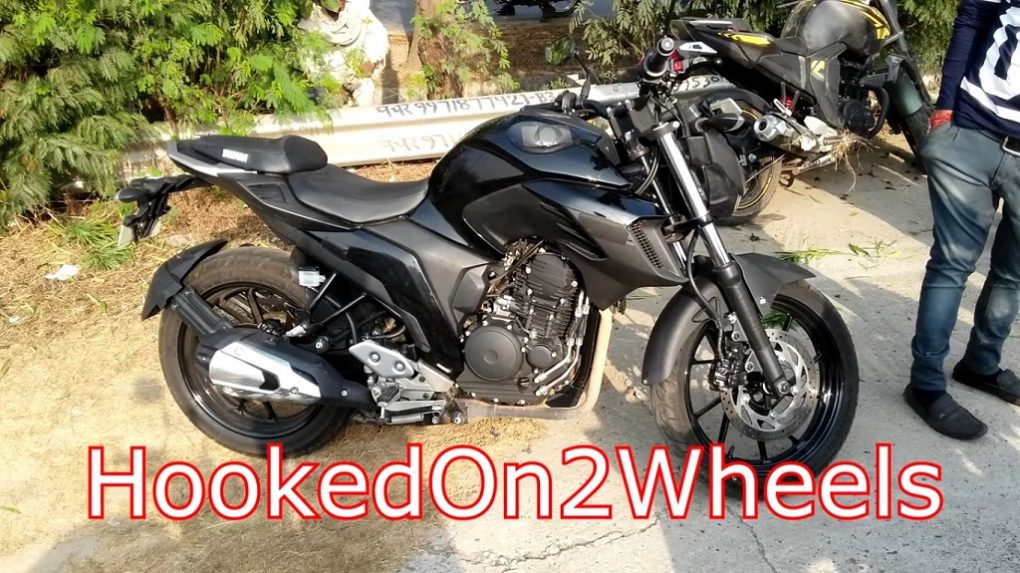 Quite clearly, this motorcycle has got a lot of similarities with the FZ series currently sold in India. It follows the same design – contoured muscular tank with step seats and raised pointed tail with an aggressive naked face (headlamp). The front forks are thick and that exhaust canister (and the parts around it) also has shared design cues. 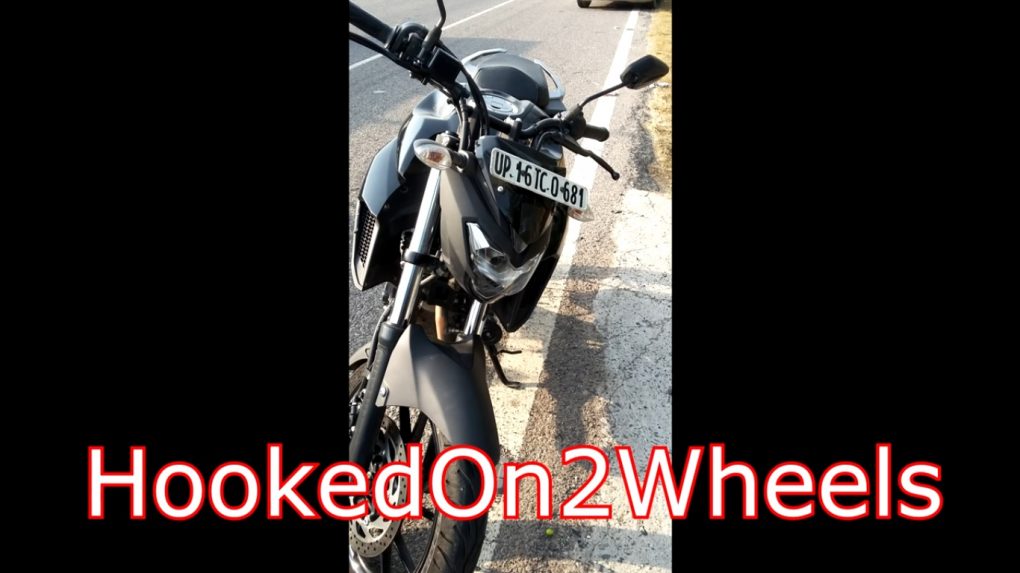 There are two test mules in this video and in one of motorcycle that tank has the Yamaha logo taped and the model name probably will come on those tank extensions (again hidden). And if you have any doubt still why are we calling it a near 250 cc engine, just compare the motor with the space taken by FZ’s 150 cc engine. 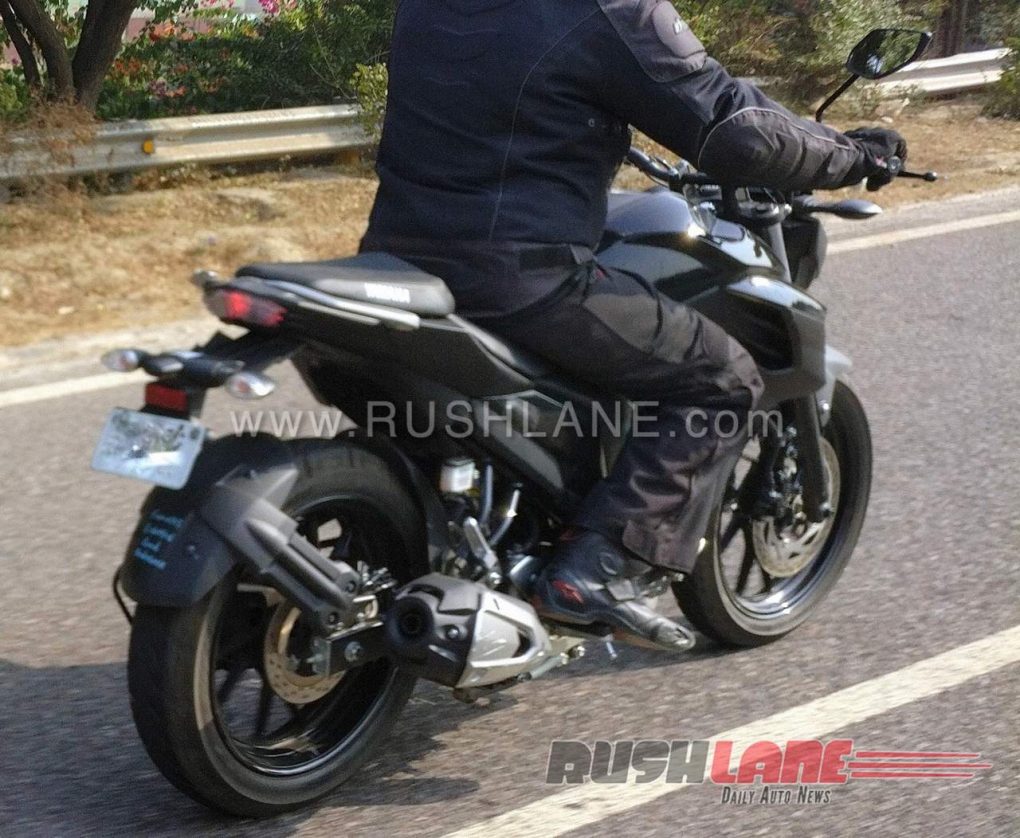 Looking at the completeness and the fit and finish, this appears to a production-ready version on final tests. And there has been no effort to hide the whereabouts of the motorcycle considering that there is a big gleaming ‘Yamaha’ print on the rear seat. Apart from this, we can decipher the following bits about the upcoming motorcycle… 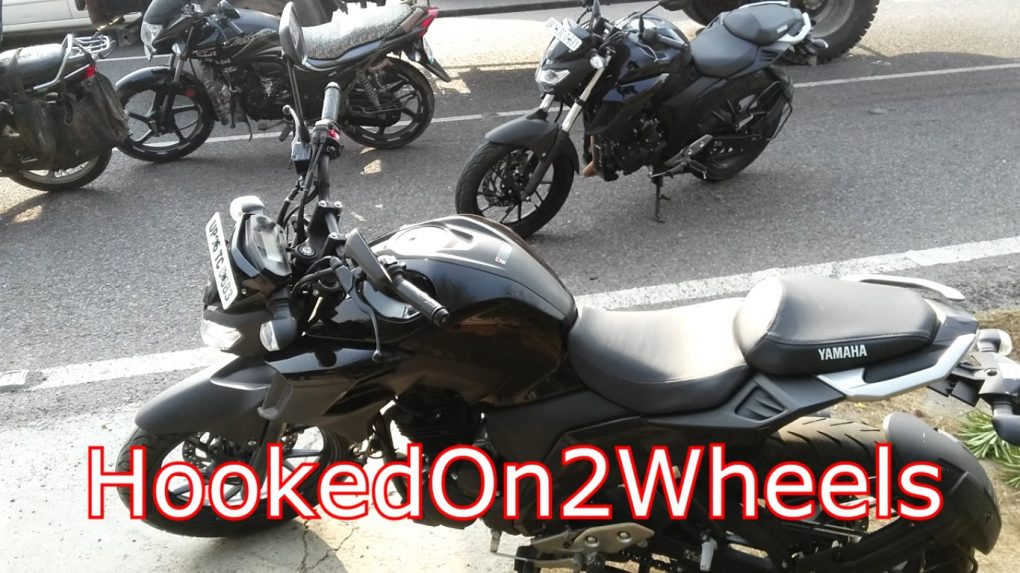 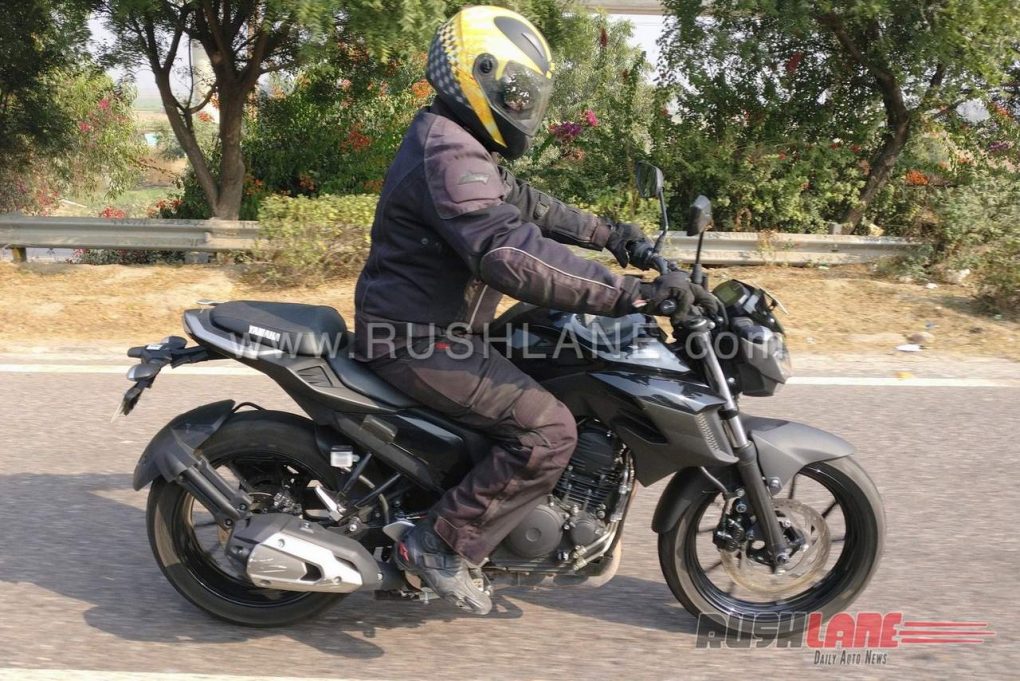 As we have deciphered earlier, this is a single cylinder near 250 cc engine and going by the looks of it (and air-cooling), it appears to be the same 249.45 cc engine of the Fazer 250 sold in Brazil. This 20.7 PS/20.5 Nm motor is SOHC (Single Overhead Cam) and has the regular 2-valves. Now, we are sure that Yamaha will not bring it here in its current tune – there is bound to be a power bump. 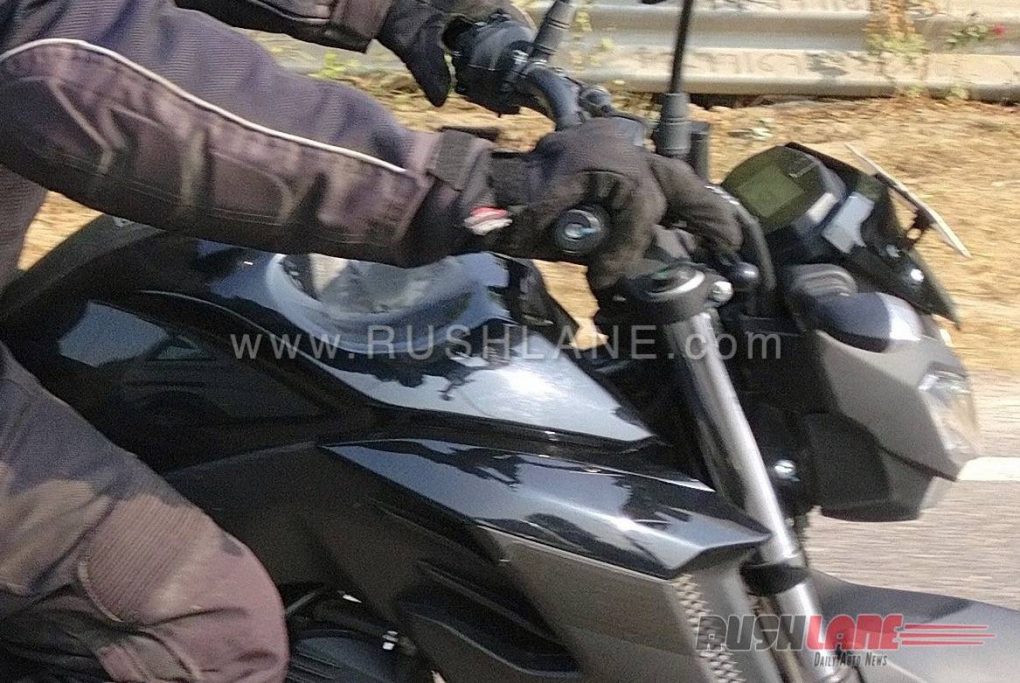 And what we can sense from the info we have till now (part-sharing, cost-effective oil-cooling in place of proper liquid cooling etc), Yamaha has plans to place it lower in the spectrum. And with Dominar 400 killing all kind of estimates, they better do that… 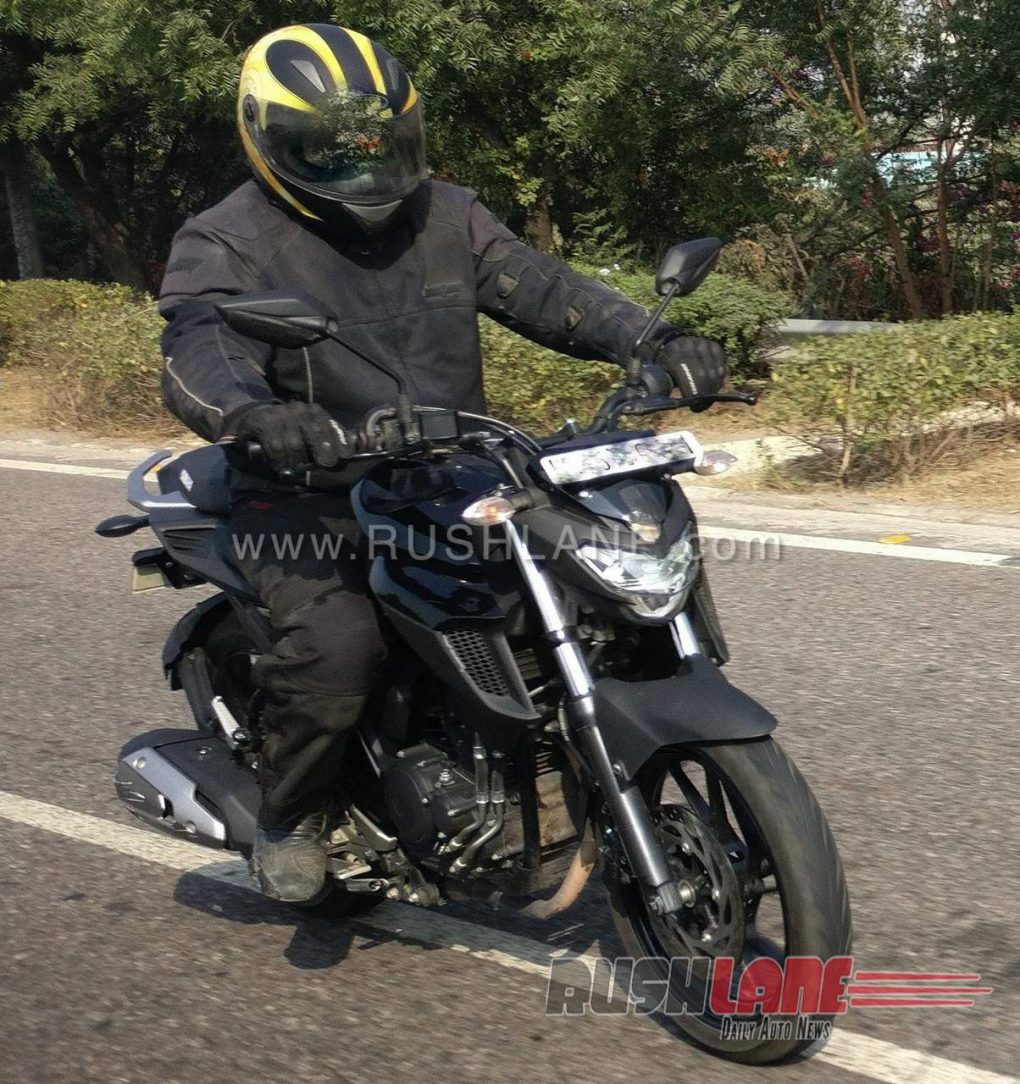 Yamaha has officially sent out ‘Block Your Date‘ invites to the media yesterday informing about a press conference on 24th of January. Though not officially confirmed, but it is, in all probability, the launch of this FZ 25 (assumed name). Link to our report

Next Read: R15 v3 Spotted; Gets Upside Down Forks: 8 Observations