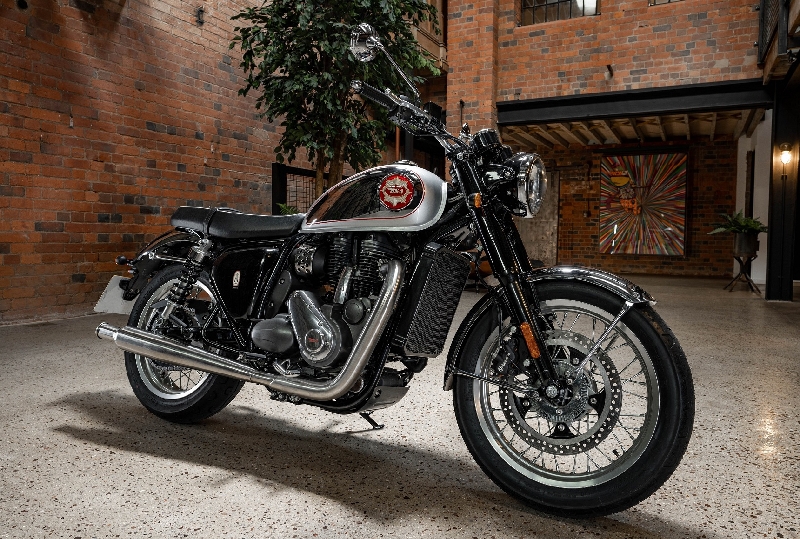 BSA Gold Star will be the first bike that will spearhead the show now. It produces lesser power than Royal Enfield 650 Twins…

A few days back we reported that BSA is making a return through their social media announcement which excited and thrilled their fans to great extent. Birmingham Small Arms (BSA) had organised a special preview of their new bike – Gold Star – which was unveiled at an event in Birmingham recently.

From the images, we can observe that the styling of the bike and its name is reminiscent of their most famous model – BSA Gold Star – flaunting a tear-drop tank with chrome panels, twin analogue gauges and traditional styling with retro colour scheme.

The Gold Star, for some reason, is powered by a single-cylinder 650 cc engine that produces 45 bhp of peak power at 6000 rpm and 55 Nm of max torque at 4000 rpm. This motor is mated to a 5-speed gearbox. However, there are some modern bits like Dual Overhead Camshaft (DOHC) along with liquid cooling.

In terms of specs, these are comparable with Royal Enfield 650 twins in India but the twins come with a dual cylinder engine. The bike will continue its authentic traditional look by utilising a tubular cradle frame, wire-spoked wheels, conventional front forks and twin-shock rear suspension.

Just to refresh the memory, BSA Motorcycles became inoperative in the 70s but was revived when Mahindra Group subsidiary – Classic Legends – bought the rights to the company and decided to bring back the three siblings (Jawa and Yezdi being the other two) for the enthusiasts who still want to hear and feel the infamous rumble once again.

Expect the Gold Star to reach dealerships sometime next year, however, whether it will be launched in India or not is not confirmed. But it is almost certain that it will not come here anytime soon.