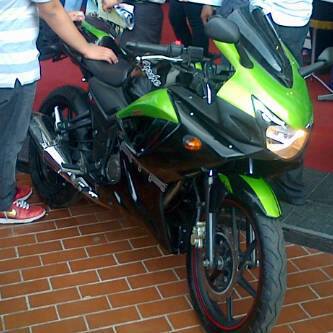 We stumbled across this picture on the web (Club Moto) a few moments back, and it definitely caught our eyes.

This snap, if original, could bring out a sigh of relief for the innumerable Apache fans. For years, the TVS Apache has commanded a respectable fan following. With a racetrack-honed sharp handling and rapid off-the-starting-blocks agility as well as an awe-inspiring growl, this Beast-of-a-Bike was a true aggression-filled mean machine.

However, it has faced brickbats as well. The basic design continued to be handed-down over to the new generations, and there was widespread fan opinion to provide a facelift. Unfortunately, when the company finally pulled up its socks to present a fresher design, it received harsher criticism than ever, with some furious zealots demanding a rollback to the previous edition. Things get even furious when people are reminded of the Taurus 250cc concept bike that TVS showcased in one of the long gone Auto Expos!

Nevertheless, Apache was and does remain a popular bike in India, probably due to the character it imparts to itself because of its enviable exhaust growl.

A bigger Apache, probably a full-faired one, has been on the wishlist of many enthusiastic Apache fans. TVS has tried unsuccessfully to market the bike as a race-track machine, it has ended up being relegated to the status of a bike often used to rush, not race, around on public streets. The looks and styling have not been competition-endangering, and some teething issues like vibrations have persisted.

Meanwhile, TVS has masqueraded as an entity-with-a-mission, and has joined forces with BMW. As reported earlier, their first product could be a quarter-liter machine (More Details). Does the snap we came across provide an insight into the probable quarter-litre from the TVS-BMW dalliance? Read our opinions below :-

It appears to be the handiwork of a very proficient bike modifier, the perfect fit of the original Beast-Style Apache headlamp in the fairing speaking loads about that.

Though there might be a big “R-T-R” Logo emblazoned on the fairing, the edge near the tank recess provides a tell-tale clue of a Honda CBR 250R. The faux-pas air intakes near the headlamp remind of a Gixxer, whereas the turn-lamp indicators force us to reminisce about an era, that had been bygone long ago. Where are the Clear-Lens indicators??

Other than that, the modify job seems to have left the bike untouched. The front mudguard along with the disc-brake assembly are clearly an Apache’s belongings. The engine case is peering out from under the fairing, quite similar to the design that’s embossed on the plastic part of the keys that come with Apache.

The exhaust is definitely a rip-off from the 2012 Apache, and so are the rear-foot pegs. For the naysayers, we have one final piece of nailing evidence : Look at the headlamp! It stays true to the Apache, with a yellowish central beam flanked by the whitish glow of the Daytime-Running Lamps.

Contrary to what we said above, this bike appears to have a longer wheelbase than what TVS lends its Apaches with. Add to that the absence of dual shocks or rather, the presence of a mono shock and raised rear seating.

If TVS decided to come up with this quarter-litre machine, it is definitely in for some serious bashing from the fans. It will turn out to be a no-brainer from TVS, as the basic look remains unaltered.

We are skeptical of this bike being a bigger Apache, even though the fit-and-finish seems near factory-made.

What do you see? The upcoming bigger Apache or a neat mod job?