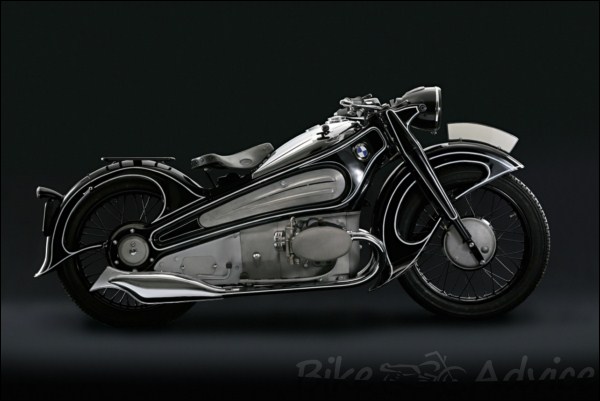 Ultra rare BMW R7 history, its specifications, plans and truckloads of other information – read it out in this BikeAdvice Featurette!

This happened more than 85 years ago! BMW created a new sports-luxury motorcycle prototype with simple name – R7. This machine was created and developed by the very talented German engineer – Alfred Boning.

Boning wanted to invent something totally unusual and unseen before. He planned to show the design and engineering capabilities of BMW at its best.

It was very risky and radical decision; Boning intended to change the standard motorcycle design of the 1930’s completely. He didn’t know if public would accept the extravagant design of the R7, but he was persistent and his project came true, despite several financial problems.

It was the glorious motorcycle, with enclosed bodywork (probably for first time) and pressed steel bridge frame. For the first time ever telescopic front forks were used; they were installed on every motorcycle in Germany after 1935, however for R7 it was an exception, and forks were used even before they came to mass production.

Frame itself was made from steel, but there were some parts made with monocoque method, which was exceptionally rare for motorcycles and cars. Every single detail and part was carefully designed; even mudguards were extremely stylish and innovative. Also extensive use of chrome added a lot to the bikes design, it looked futuristic and powerful.

It was motorcycle like no other and the world had never seen anything like that before (even by modern standards R7 still looks exceptionally great). And it wasn’t only looks. Comfort and technical parameters were also ahead of their time as well.

Again, for the first time in a European motorcycle, the engine was crafted in one-piece tunnel design. Crankshaft was forged in a single piece too. Cylinder and its head was a monoblock unit, which eliminated possible problems with head gasket. And such problems were pretty common at that time. Aside of that combustion chamber was hemispherical, and with several other innovations like separated con-rod ends, performance was amazing. Many of those features were not available for BMW motorcycles until /5 Series was introduced, in 1969! Not surprisingly, this project was led by Alfred Boning.

Gearbox was a 4-speed unit with dry, single plate, cable operated clutch. While hand gear change was common at that time, no motorcycle had such easy, functional form of gear changing. It was similar to car’s gearbox actually. Gear ratios were pretty wide, and BMW R7 had top speed of 145km/h!

The rider riding the R7 would sit on the sprung saddle, gripping the side covers (that could be opened to reveal the electrics) with his knees. His feet were greatly protected on the steel footboards. Speedometer was functional and very different; it was similar to speedometers that were used for prestige cars of the era. This motorcycle was aimed at the very successful people, because it was very expensive and rare.

Everything looked functional and in perfect synergy. Even exhaust pipe was uniquely shaped, and I need to say it was fantastic! Aside of that, the taillight was sculptured in an interesting shape, and it had the word “Stop” illuminated in the lens. Also motor hung in original position from the pressed steel frame. Again, it was so different, comparing to usual motorcycles from 1930’s.

Without any doubt BMW M7 was a glorious motorcycle, but it was too expensive and hard to build. Company decided to produce inexpensive sporty motorcycles, which were quite affordable for the general public. Strangely, R7 was never seen on any motorcycle shows at that time, so almost no one had heard about it. As war approached, the motorcycle was put in a box, along with its construction plans. Some parts were stripped and used for other motorcycles.

In June 2005, almost 70 years later, the box was finally opened and quite naturally the R7 was in quite a bad condition. While the motorcycle was 70% complete, many parts were damaged by rust. And on top of that the electric battery caused serious corrosion of steel. It was an expensive long-term project, but BMW wasn’t giving up.

Various technicians from BMW started to work on this project. Bodywork was handed to Hans Keckeisen, and another specialist in vintage boxer engines (Armin Frey) was working on the priceless motor. Gearbox, transmission and engine needed to be replaced, and while several missing parts were not hard to find from other vintage models, some needed to be re-created again. Luckily original construction plans from 1930’s were found in the BMW archives, and the re-creation process became easier.

Finally, in late 2007, all parts were found, re-built and put together. Motorcycle was painted with BMW signature black paint; later white pin-stripes were added. After over 70 years the motorcycle was kicked into life again.

Apart from being a display model at the BMW museum, the R7 was showcased at various classic events and shows throughout Europe and the rest of the world. The ultra-rare R7 was way ahead of its time!