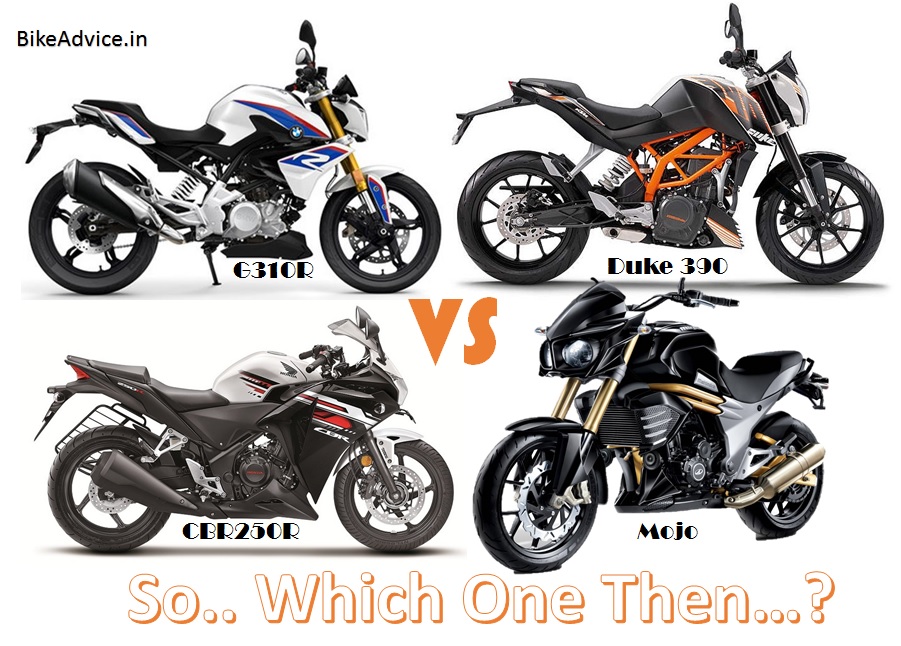 The recent unveiling of the BMW G310R has caused a flutter in the world of quarter litre to 400 cc motorcycles. The German brand carries with it a promise of solid build quality and a power packed performance punch. Though the G310R has been built for a lot of developing countries, going in India will not be easy. Especially because not only will it be fighting against the more expensive twin cylinder products but also tourers like Mahindra Mojo and the ever so versatile pocket rocket – Duke 390!

So, here is a quick spec comparo of the upcoming smallest Bavarian with all the comparable single cylinder counterparts. We have also included the smallest Honda CBR250R in this list as the bike, despite being old, is kicking some butts, of late!

The 313 cc all-new mill of the BMW G310R produces segment second-best power output of 34.4 PS and a complementing 28 Nm of peak torque. These figures do look impressive but they are beaten fair and square by the capacity advantage of its biggest rival, the Duke 390. Now the Austrian warlord is a timeless beauty in terms of performance. Not only is it light but it also gets Metzelers – one of the best rubber found on Indian motorcycles under 500 cc! Competition in the form of Mojo also offers awesome Pirelli Diablo Rosso 2 tyres and the new CBR250R is offered with MRF rubber. We do expect the baby BMW to sport fairly competent tyres (may be TVS branded) when it goes on sale here in India.

The other two players in this comparo may seem to fall behind in terms of performance but excel in a particular niche. Essentially tourers, CBR250R and Mojo produce an almost similar amount of power but the Mojo’s 30 Nm torque which peaks the earliest in this comparo may just end up making it the easiest to ride. All the bikes come shod with 6 speed transmissions.

Mojo claims to have the largest front disc in the segment but for some reason it lacks the sharp bite and is probably the only con we experienced in our first ride and it also doesn’t get ABS. The BMW G310R, like the Duke 390 comes with a dual channel ABS as standard. The Honda comes with the optional combined ABS. 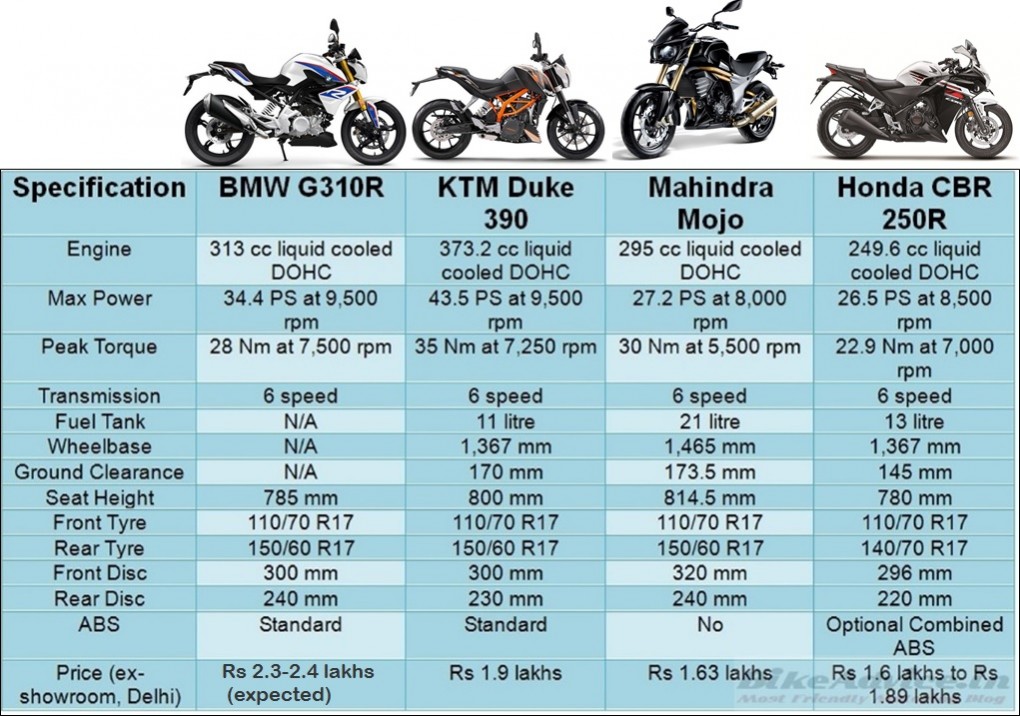 Pricing is where BMW will have to work the hardest. Just like KTM, they can also come up with a major surprise since the G310R will be produced locally by TVS. It, basically, will be a direct competition between the Duke 390 and the G310R and despite local production and lower specs, we see it (G310R) retailing at around the 2.3-2.4 Lakh (ex-showroom) levels.

So, though the Duke 390 may remain the quickest, fastest motorcycle in this list along with being the most Value for Money, we see the BMW tag luring enough to cause a major flutter across all manufacturers and do not forget, there will also be a TVS equivalent (of G310R) nothing of which is known at the moment!