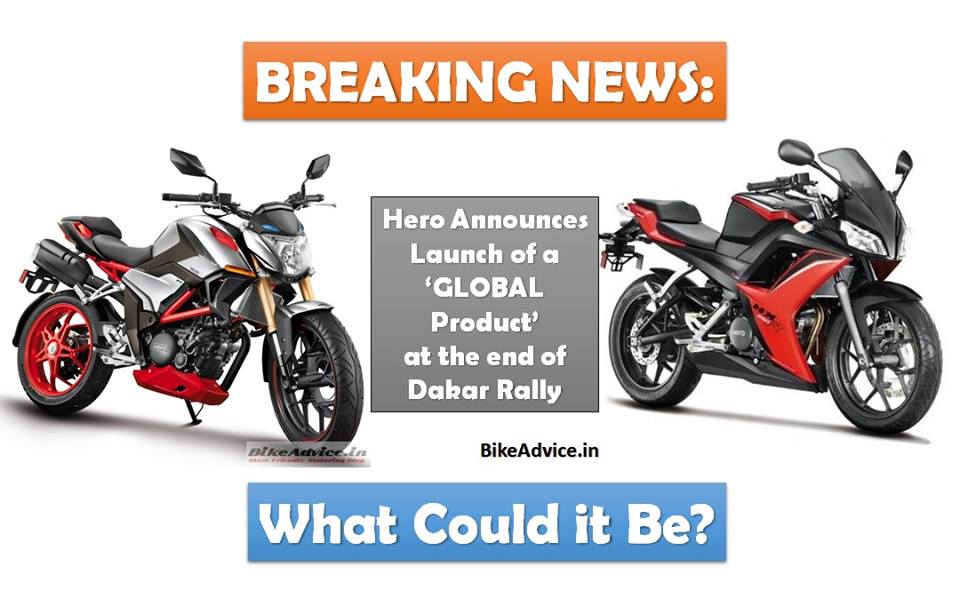 After showcasing some truckloads of very very interesting motorcycles in the last two Auto Expo’s nothing much from Hero has made it to the roads yet (related story)! Interest levels are definitely high, but expectations get killed when they launch ‘yet another commuter’! But today the Indian giant, which has managed to hold onto its massive lead against the competition quite handsomely, announced something which should set some pulses racing.

The company at a press conference of the launch of new BS4 Achiever 150 announced that they will be launching (read launch and not just unveil or showcase) a new global product at the end of the Dakar rally where they are participating for the first time.

The only details they have shared are – the product, most probably a motorcycle, will be launched at Buenos Aires, the Argentina capital. That is the location where the 2017 Dakar will culminate. For your information, the world’s toughest rally begins in early January and concludes on January 14, 2016! And as close as we heard it, Mr Munjal did say “at the end of Dakar” which means the launch is scheduled either exactly on the 14th Jan or some day near it.

The manufacturer, which has been known for products shouting fuel efficiency, has shown remarkable progress of late. Even their press conferences are hosted by the R&D team and not the marketing guys. The next step, as the company sees, is a global product. While some may argue that Hero has been present in some international markets for a long time now, it is for the first time that the company will be launching a product which has been designed for the world.

So what can it be – the HX 250 or the Xtreme 200S or something else? For some reason we can not connect the dots and we had a long discussion within our team to have some concrete evidence or a hint at the possible product. But sadly, we are not convinced if it will be the HX250 (which doesn’t go with Dakar’s off-roading theme) or the Xtreme 200S (because they even talked about the product at some other time during the conference by naming it) – the two products which may be production-ready by now. It doesn’t appear to be the XF3R (simply because it is very futuristic) and Hastur is some light years away!

How about a big surprise then (going by the pulse and the way this was propagated it could be something which Hero has not talked about yet)? On the same lines, how about the rumoured (to death by the fans) Impulse 250 (or a 200)?