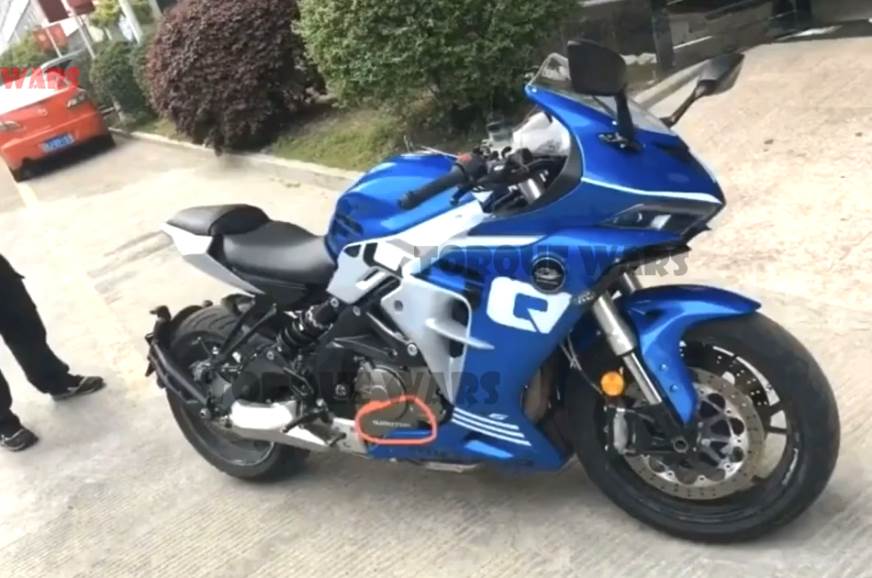 Benelli 600RR pics have surfaced which give us a better glimpse of the upcoming full faired sportster. It may also come to India…

The first sniffs of a motorcycle called as ‘600RR‘ under Benelli’s moniker surfaced from a product plan document which was leaked earlier this year. It also included other motorcycles – TRK800 and the Imperiale 530. The Classic cruiser has been spotted earlier and you can check its spy pics here whereas the TRK800 remains elusive till now.

The 600RR was snapped a few days back (here) and in a latest, it has been caught in the open. This is the Qianjiang equivalent of the Benelli branded 600RR. Qinjiang is the parent company of Benelli.

This full faired midsize monster looks bulky and appears to be fairly loaded. Those are probably LED dual headlamps which give it an aggressive look. It is also equipped with upside down front forks, twin disc brakes at the front along with other added kit that we saw on the SRK600 like backlit switches, large digital cluster, keyless ignition, etc.

The SRK600, which was also spotted recently, appears to be the streetfighter sibling of the 600RR. It will likely continue with the same 4 cylinder 600cc engine of the TNT 600, along with the obvious emission related and other updates.

Though there is an extra ‘R’ in the name but it doesn’t appear to be an out and out sporty offering with an extensively crouched seating posture.

Considering that the streetfighter version will definitely go on sale in India this 600RR should also come in our market, after its official launch, probably sometime next year.