Having reviewed Yamaha R15 and Hero Honda Karizma already, I feel I have really delayed writing a review of Bajaj Pulsar 220. These three bikes are one of the best and fastest models available in India today. The bike I reviewed was Blue in color and looked gorgeous just after the water wash.

Styling: On the first look of the bike, it looked like a cheetah ready to pounce on me. The head lamp is designed in such a way that it adds a life to the bike. It is nothing short of a face of a robot. Look at the tell tale lights, doesn’t it look like eyes? This is the second bike in India after Karizma which has isolated handle bars (like the real sports bikes). Such bikes position itself as a unique category, a higher status of machines.

The tanks are adopted from the original Pulsar and has a scratch pad near the seat. The tail part is nothing new. It just looks like the other Pulsars and it disappoints me a little bit. Someone looking just the tail wouldn’t be able to differentiate whether it is a Pulsar 220, 200, 180 or 150. 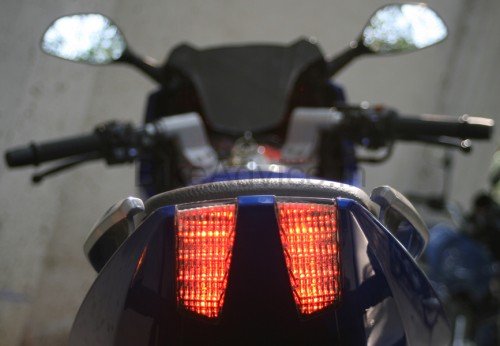 Performance and Handling: The bike has great agility. It has a tendency to ‘jump off’ when you twist the throttle which gives a great adrenaline pump. If you really want to whip the engine to its limits, the Indian city roads will disappoint you.

I own a Karizma, and when I drive the Pulsar 220, I feel as if the bike is light as a feather. There are both pros and cons to this. On my Karizma, I feel more safe and stuck to the road with the heavy solid feeling, but Pulsar 220 seems to be ‘flying’ which is good, but does not give me a safe feeling. The details may be different, but this is what I feel, and you would perhaps feel the same if you test the two bikes. The maximum power is 3 PS more than Karizma, but the top speed is nearly the same – 126 kmph.

Features: No doubt that the Pulsar places itself on par with other high end bikes. The features in the dashboard are nothing short of spectacular. With orange backlit digital console, it displays the speed, fuel level and ODO meter is incorporated below the speedometer. Like the bikes from Honda, Pulsar 220 has single indicator for the signal. The tachometer dial and the digital console perfectly blends with each other. 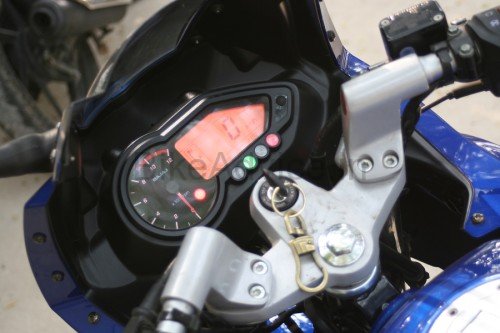 Verdict: In the test rides, the Pulsar 220 is a little faster than the Karizma, but we have to wait for Karizma Fi, a new version of Karizma that is to be launched soon. Bajaj Pulsar 220 is a great bike overall compared to the other bikes in India, but taking into account the international bikes, its stands no chance against them. Hopefully we can see lot of new technology coming up in Indian bikes in the coming years. If you want a high performance bike, wait a little longer for the new Karizma and then make the decision.

Cons: Not so pleasant engine sound

Despite COVID BMW Registers Best Ever Sales in 2020