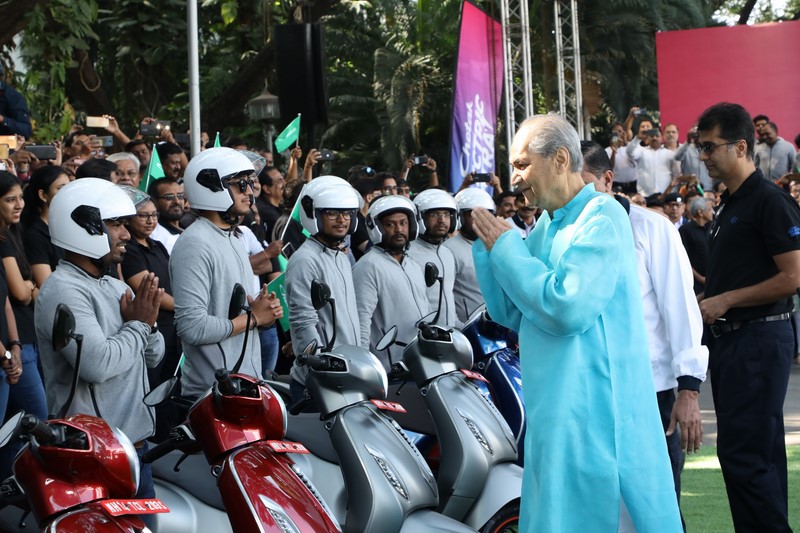 Bajaj Chetak deliveries will commence from Pune. Later the company will take it to other cities, however, there is no plan to setup any charging infrastructure…

Bajaj officially unveiled its all-new Chetak in India on 16th November in Delhi where the ‘Chetak Electric Yatra’ was also flagged off by Nitin Gadkari, Minister for Road Transport. This expedition was to travel to various cities of the country to finally reach Pune.

After travelling through Agra, Jaipur, Udaipur, Ahmedabad, Mumbai, Panaji, the riders reached Pune today. They also visited the Chetak Samarak in Chittorgarh. An event to receive the riders was scheduled at Bajaj’s office in Akurdi and they were felicitated by Mr Rahul Bajaj, chairman at Bajaj Auto.

There are 2 drive modes – Eco and Sport and along with a reverse mode on this scooter.

Chetak to be Sold Through KTM Showrooms

It is equipped with an IP67 rated Lithium Ion battery with NCA cells. Bajaj says that Chetak can be charged by any household 5-15 amp outlet. Apart from this, the company will also be offering a home-charging station to its users at a nominal cost.

Price of Chetak will be announced in the days to come and Bajaj will commence deliveries of the scooter from January 2020. The first market to get the scooter will be Pune, followed by Bangalore and other cities. Bajaj Chetak Launch, Expected Price: Some Quick Answers