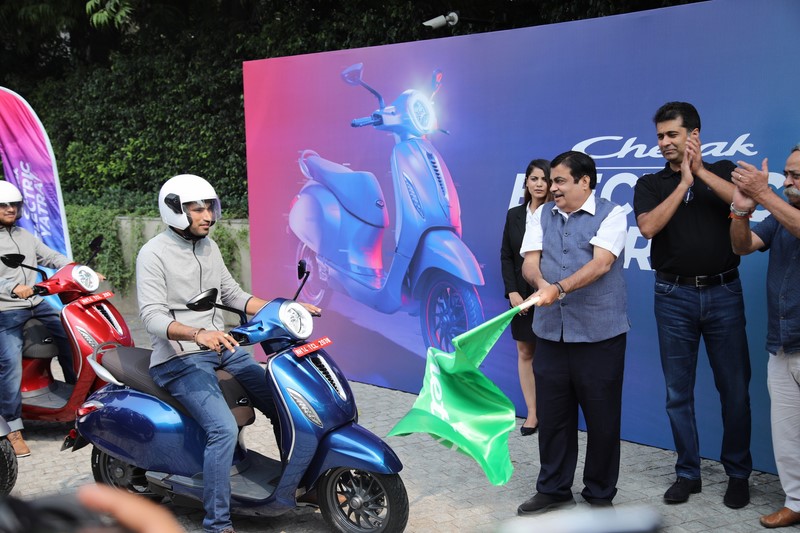 For all the reasons, yesterday’s event was not very fruitful as Bajaj did not reveal a lot of details of its comeback scooter Chetak. Heck, we do not even know the key features of the scooter and nor does the official website talk about it much! Nonetheless, to commemorate the launch celebrations of the brand Chetak, Bajaj has conducted a ‘Chetak Electric Yatra’.

This ride was flagged off by Mr Nitin Gadkari, Minister of Road Transport and Highways in the presence of Mr Amitabh Kant, CEO of Niti Ayog. This ride comprising 20 riders on Chetaks, was flagged off from Hotel The Oberoi, New Delhi and it will traverse through North and Western India. In all, it will cover about 3000 kms and will finally reach Pune few days later.

Through this ride, Bajaj intends to announce its arrival in the electric scooter space through Chetak. It believes that Chetak will lead electric vehicle adoption in India.

Unveiled yesterday, Chetak will be officially made available from January 2020 with the first market being Bajaj’s hometown Pune. It is then Bajaj will also announce its prices. The second city to get the scooter will be Bangalore, followed by a few other markets in the months to come.

Chetak is Bajaj’s return to scooters after almost 14 years. Its last scooter was Krystal which did not do well in the market. Rajiv Bajaj still maintains that motorcycles will be the company’s forte and with Chetak they want to present alternate mobility solutions to India and the world. Interestingly, Chetak is being pushed as a separate brand and there is no ‘Bajaj’ moniker on the scooter anywhere.