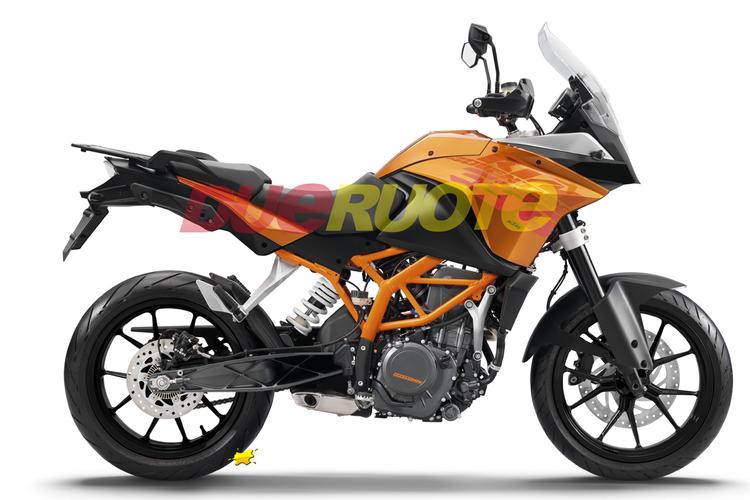 Update: It is absolutely not known how will the Adventure 390 or the 200 look since no spyshot, nowhere in the world, has surfaced so far. But we have landed upon a render pic of how the small adventure motorcycles may look like. This pic you see below is an old 2014 year speculative rendering of how Dueruote, an Italian publication, envisages the KTM Adventure 390. Remember the final version may or may not have any similarities in design with this artist’s rendering! Original article continues…

Known to introduce market shaking models, the Bajaj-KTM alliance seems to be venturing into yet another very interesting terrain! As per an article on Autocar Professional, the duo has developed an all-new small capacity adventure tourer motorcycle platform, a segment where the Austrian manufacturer has a well known history.

The report adds that the new adventure model will be based on two engine options. Now this could either be the mill from the 390s or the 200s. In fact there is a big possibility that the new platform could have been designed to carry both the engine options, as has been the trend so far. Manufacturing would not be a problem as the company is already making the same engines for the Dukes and RCs. A few minor modifications though will have to be made.

This is not the first time when KTM has been associated with a small capacity adventure tourer. KTM’s CEO had earlier hinted about a ‘tour purpose’ model for India. Autocar also adds that the new KTM-Bajaj adventure bikes are ready and can get launched as early as the first quarter of the next financial year – which starts from next month!!!

If the alliance decides to introduce both the engine options then there is a possibility that the KTM Adventure 200 might be introduced first to test waters. Royal Enfield’s Himalayan is the only other affordable adventure tourer in the country which is yet to launch. However, it is the bigger 390 Adventure we are more interested in. We expect it to be placed between the Duke 390 and RC390.

The first sneaks on KTM 200 and 390 Adventure have started to chirp in and we do not see them very far away…. Fingers Crossed!