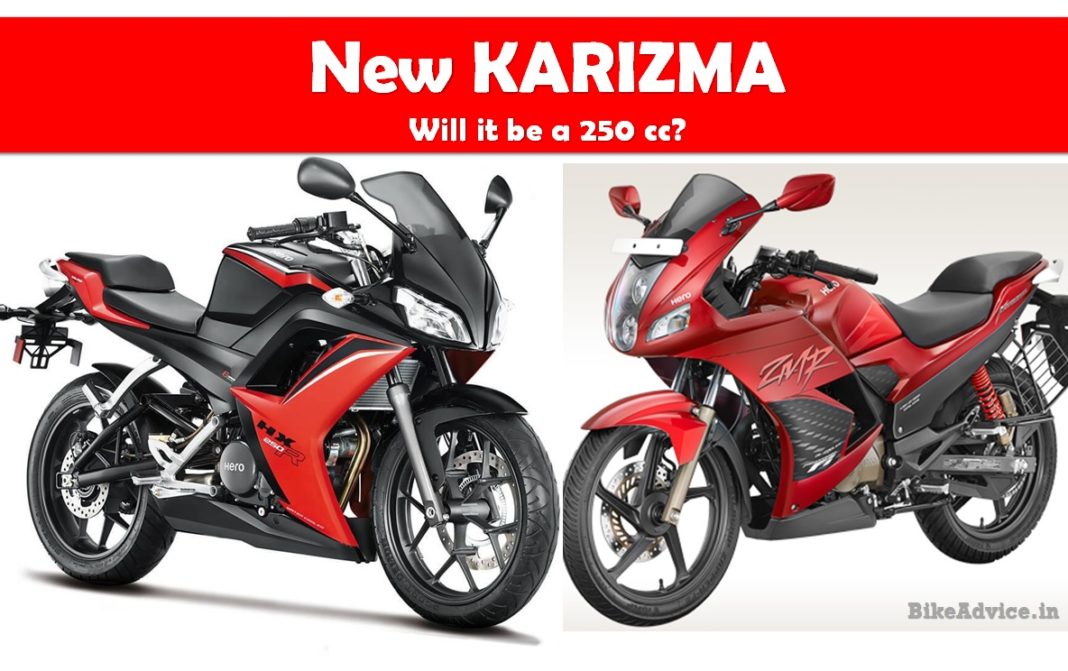 New Karizma launch timeframe not known but it is under works…

Karizma has never been a very brisk seller but back in 2003, when it was first launched, it did awe the bikers with its big bike looks and the torque that 223 cc engine produced. Though arch-rival Pulsar 220 outsold it by massive margins, it (Karizma) was and probably still is one of the most regarded motorcycles in this segment.

It was joined by Karizma ZMR, the fuel injected variant in 2009 but it was snubbed as being overtly dramatic in its looks! However the big turning point was 2014, when Hero lent some major updates to the Karizma twins (which were based solely on its internal design departments and inputs from EBR). Partner Honda, by this time, was completely focusing on its own subsidiary.

This update is what broke the brand – it was completely discarded by enthusiasts and ever after that it just dragged at sales charts.

People believe that Hero stopped production of Karizma twins way back however, according to SIAM monthly sales data Hero last produced four units of the motorcycle in the month of March 2017, after which they could not sell it in the market before upgrading it to BS4 emission norms. In all, the motorcycle major produced 982 units of Karizma in the complete financial year of 2016-17 which was a huge drop from 6624 units it manufactured in the last financial year.

In terms of sales Hero sold only 291 units of both the variants as compared to 3713 units it managed in 2015-16. At 740 units, its export numbers for FY17 were higher than domestic dispatches. It could be taken that Hero was producing the Karizma more for the export markets.

But since April this year, Karizma’s production has completely been stopped and among a lot of other motorcycles, this 223 cc steed is also not on sale any more.

It is well established that 2014 Karizma twins were complete disaster in terms of sales and Hero understands that. They did not pay any heed to the motorcycles and instead was focusing on retaining its stronghold in the entry level segment, when Honda was right under their throat!

Hero, in an earlier exclusive interview with BikeAdvice, had informed that work is underway on the new Karizma without revealing specifics about its possible launch timeframe. You can read about it here. And that may probably be the reason why they have still kept Karizma ZMR on the website (rest all other discontinued motorcycles have been taken off the website).

Now the questions are…

Regarding the 223 cc long stroke motor – irrespective of its status, it is unlikely that Hero will use it in the future since they have already developed (or developing) 200cc and 250cc engines of their own.

Chances of Karizma being downsized to the utilitarian 200 cc motor from Xtreme 200S are also almost nil. That brings us to the most interesting part – there is a big possibility of the new Karizma getting the 250 cc engine of the HX250R which produced 31 PS.

The product portfolio could look like this – a brand new Karizma R, no more ZMR and in this premium sub-segment they can instead place Karizma HXR (rebranded HX250R).

Also Read: ‘Why Hero is in Danger & May Get Lost’ – Analysis by BA Reader from IIM

This is purely my analysis and this is what I think could/should happen. But what is apparently clear to me is that the ‘Karizma’ brand should live! What do you think – how should Hero plan Karizma’s future?