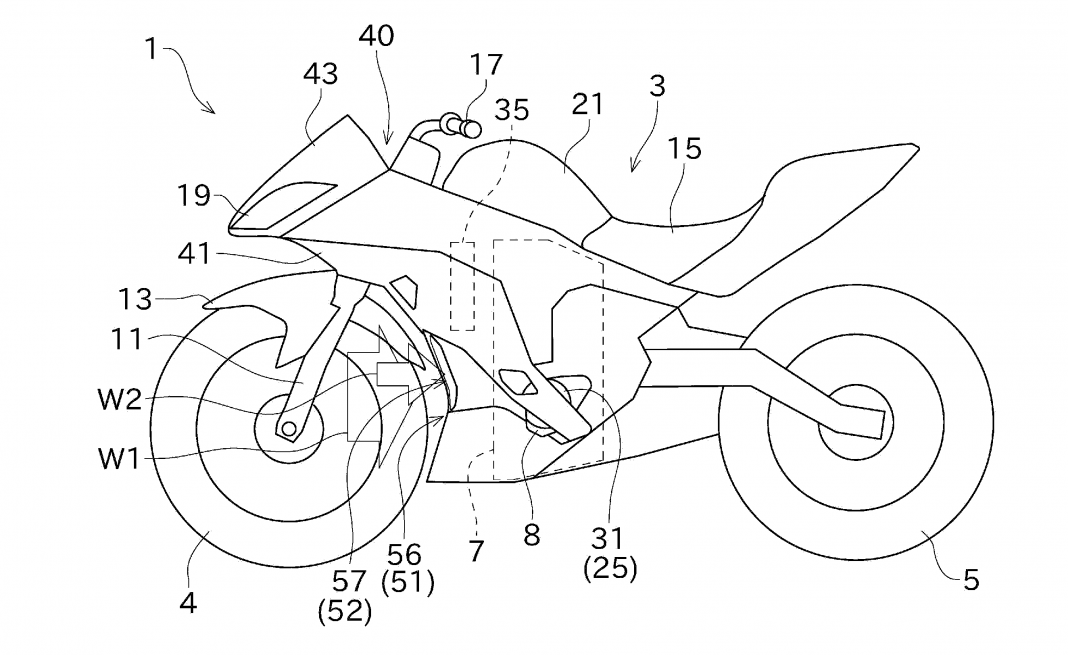 Kawasaki ZX4R patent pics reveal the company’s intents. It could be the elder 4-cylinder sibling to the newest rage ZX25R…

Kawasaki ZX25R created quite a stir in the market when it was launched last year. That is because of its unique engine configuration. Nobody makes commercial four cylinder 250cc engines in the world at the moment.

More recently, speculations that the Jap is considering a 4 cylinder 400 made things interesting, further. And now some patent design documents, kind of, confirm that Kawasaki is indeed working on a 400cc inline 4-cylinder superbike which could be called as Ninja ZX-4R, going by how the company names its products.

The 2021 ZX25R is currently available in various Asian markets. However, it is a tad too small for the bigger, developed nations. So, in these markets Kawasaki may consider getting this 4R.

If we follow the design from the patent files, it deploys an air-cooling mechanism along with a radiator. Interestingly, the patent design has no mention of ZX25R or anything related to the 250cc bike except the similar framework.

This means Kawasaki has been planning and designing a 400cc inline 4 bike and ended up with a 250cc variant maybe just to test out how a nimble bike in the quarter-liter range is accepted by the riders.

Now that ZX25R has found its potential markets and has been received well, Kawasaki may focus on the 400cc model.

7 Easy Motorcycle DIYs You Can Do At Home [Guide]

If ZX4R or whatever the Japanese bike maker decides to call it surfaces, it will definitely have no impact on the Ninja 400 which is a relatively less-sportier twin-cylinder engine sports bike.

What will be the final form and which stage is the development at is not known and neither can do we have any idea of its launch time frame. But it is possible that the company may focus on the European market with its inline-4.

In India, Kawasaki’s inline-4 segment begins with the naked Z900 supersport that retails at around INR 9 Lakhs. Indian superbike enthusiasts are yet to see the arrival of the ZX25R. Currently, only the baby Ninja AKA Ninja 300 BS6 is available in the lightweight sports segment.