Now, this report has got us excited, really! Finally, there are some concrete bits and murmurs about its launch being nearer than what the general perception is. According to a report on NDTV, Mahindra is all set to launch their flagship Mojo in June 2014, yes the upcoming June which is just a couple of months away!

BikeAdvice first busted the redesigned Mojo through a set of exclusive spyshots in January this year. The new Mojo featured a bigger bulbous fuel tank, new seat and a flatter, wider & shorter handlebar. It got confirmed when Mahindra officially unveiled the updated Mojo at the Auto Expo in Noida. The company also kept on display a Racing Mojo in white and red dual colour combo.

The refreshed muscular Mojo does look a lot more exciting than what it did when unveiled way back in September 2010. Official specs for the 2014 Mojo are not known but in another set of exclusive spyshots shared on 9th January, we noticed that the engine on the test mule had slight differences in design. 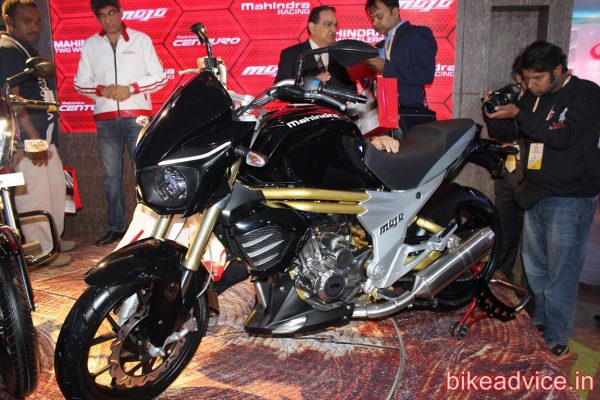 Not that this confirms an increase in power, but considering that the company has done some tweaks (at least to the design), there may be a wee bit of more power on offer (we hope!). The Mojo of 2010 produced 26PS of power output and 25Nm of torque from the 292cc single cylinder engine and was mated to a 6-speed gearbox.

There are all those hopes of a real VFM pricing from Mahindra considering that they have already done that with their earlier products. Do share with us, how much will you buy it at?