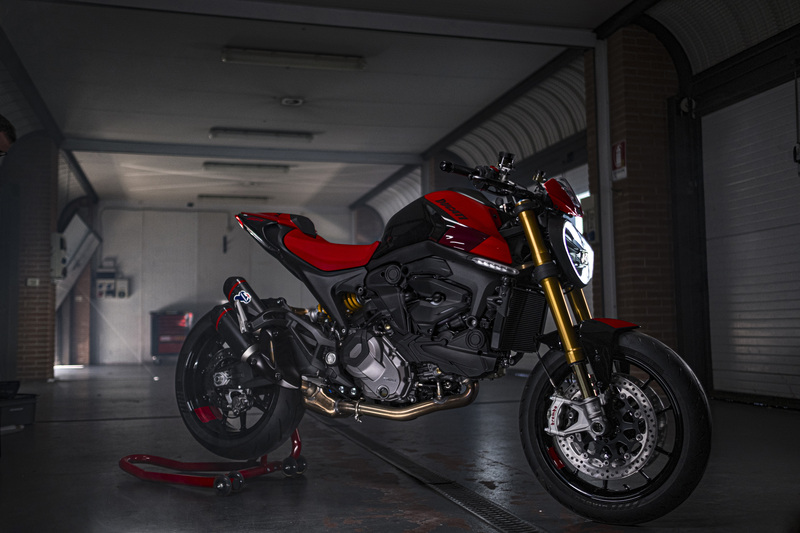 The Italian Premium Motorcycle maker – Ducati – hosted their 2nd edition of the ‘Ducati 2023 World Premiere’ event yesterday and let loose their most aggressive Monster model ever in the model’s 29-year history.

2023 Ducati Monster SP Breaks Cover In Its Most Aggressive Avatar

Ever since the first ever Ducati Monster was unveiled in 1993, the bike became an instant hit thanks to its versatility, capabilities and especially the thrill it offered to the rider through its traditional Italian charm.

Back in 2021, Ducati overhauled their Monster lineup and switched the beloved naked of the masses to the more capable Panigale V4-inspired monocoque design, a new heart and Panigale-derived electronics.  This change brought last year irked many many Ducati Monster purists and fans as, according to these people, the Monster lost its charm & persona in order to please the masses.

However, with the release of the 2023 Ducati Monster SP, the Italian manufacturer is trying to convert those who are a little annoyed with them.

Ducati’s capable 11-degree, liquid-cooled, twin-cylinder, Testastretta motor still powers the new Monster SP and boasts performance numbers of 111 HP at 9250 RPM and 93.55 Nm of torque at 6500 RPM. The power is put to the ground through a 6-speed transmission system equipped with Ducati Hydraulic clutch. The characteristics of the engine can also be controlled through 3 riding modes along with launch control.

Yet, what makes the new Monster SP the most capable Monster model is the addition of top-shelf suspension and braking hardware.

The 2023 Ducati Monster SP gets 43 mm Ohlins NIX30 USD forks at the front and fully-adjustable Ohlins monoshock setup at the rear as standard. This new high-end suspension componentry makes the bike a very capable track as well as canyon-carving machine and can also influence the ride height & lean angle the bike can achieve. This offers a great deal of flexibility to the rider to properly setup the machine to their own liking & preference.

With greater capabilities comes the need for better anchors. Ducati have also upgraded the braking power of the new Monster SP. Fitted as standard are the 320 mm rotor Brembo Stylema 4-pot callipers braking hardware with sintered pads to offer greater braking power to the rider. This also reduces the unsprung weight of the machine, giving it better agility & capability during aggressive riding. Further trimming the excess fat is the use of a trim-specific Lithium battery and Termignoni exhaust which reduces the weight by nearly 2kg.