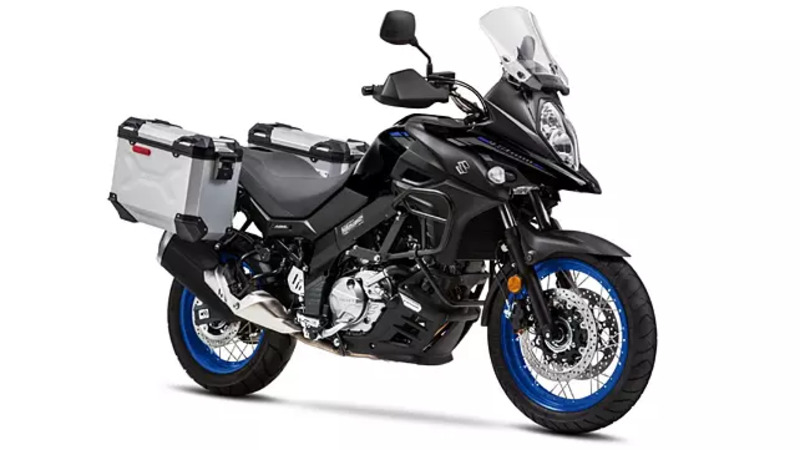 Suzuki two-wheelers have unveiled the 2023 version of their popular middleweight V-Strom 650 Adventure-tourer with significant visual updates.

The Standard V-Strom 650 receives alloy wheel combination as this model is mainly introduced as a sport-touring model. While the V-Strom XT & V-Strom X Adventure comes standard with spoked rims compatible with tubeless tyres. Furthermore, the Adventure model is offered with hard panniers as standard from the manufacturers.

Coming to the colour schemes offered – all the 3 variants will come in different pallets of colour schemes. The top-spec V-Strom 650 XT Adventure will be offered in Glass Sparkle Black paired with Blue anodised rims. The mid-spec V-Strom 650 XT will be getting Pearl Brilliant White combined with Gold anodised rims. The remaining base spec V-Strom XT will be donning 2 different paint schemes – Pearl Vigor Blue & Metallic Matte Sword Silver.

Hardware & mechanically, all 3 variants share some fundamental elements. All 3 models ride on 19” front and 17” rear wheels, the chassis is suspended on Telescopic front hardware combined with Monoshock rear and anchors thanks to a pair of discs at the front & single-disc at the rear wheel.

The engine is the same 650cc, 90-degree V-twin, a liquid-cooled unit which is admired by customers as well as professional riders globally.

There are reports circulating around that Suzuki is working on a bigger middleweight offering which might be replacing the V-Strom 650 model altogether. The report states that the new ADV could be powered by a new 700 cc, parallel twin engine which could be producing power figures somewhere around 75-80 HP.

This means Suzuki will be competing for the ADV crown which currently the Yamaha Tenere 700 or T7 holds in the global market.