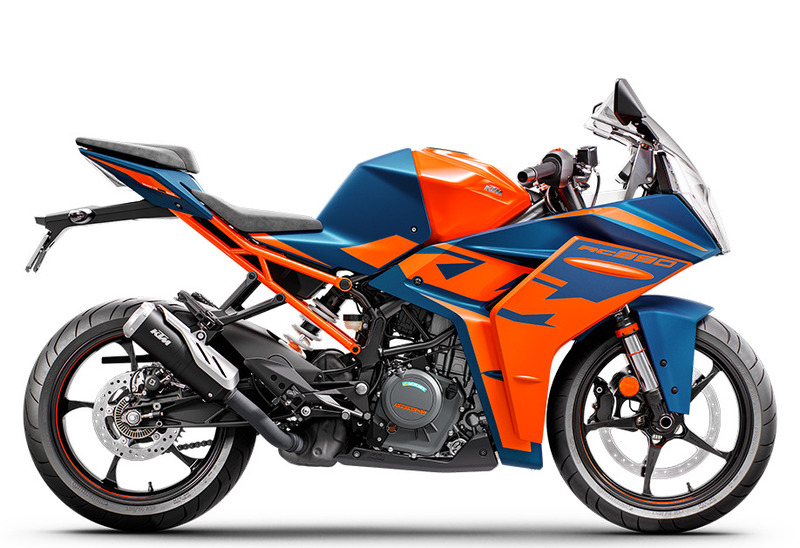 So, KTM India have finally and officially launched the 2022 version of KTM RC 390 in India. Though, way before the official announcement, nearly everything was known and reported by us, including the price.

The KTM Factory Racing Blue colour, as the name suggests, is the official factory colour of the KTM Racing team in various disciplines they compete in and is showcased on all new & updated models launched this year.

No Adjustable Suspension, Not even as an option

This lack of adjustable suspension, not even as an option, puts the new KTM RC 390 on a back foot when compared to its direct competition – TVS Apache RR 310 – which give the prospective customers the option to add the adjustable suspension, along with many other things, to their bike. Additionally, the Apache RR 310 is nearly Rs. 50,000/- cheaper than the new RC 390, adding another point against the KTM supersport.

The 2022 update of the RC 390 is described by KTM to have ‘Race-Bred Performance’. To back this claim, they had even made a full 18-minute video showcasing the race-track inspired changes they have brought to the bike along with creating a pure track-focused version of the RC 390 which few selected media members got to try in order to understand how similar it is in nature to the track machine.

The company says that the new chassis is made up of an all-new frame and sub-frame combined with lighter wheels and tyres. The combination of new trellis frame and the new bolt-on sub-frame has resulted in reduction in overall weight by 1.5 kg while improving overall stiffness and rider feedback. The lightweight 17” rims have further lightened the bike by 0.8 kg.

The ergonomics of the new machine have seen a significant philosophy change. The company claims that they have designed the ergonomics aggressive enough to perform at the track while being comfortable for the commute as well. Comfortable & supportive seat design, redesigned footpegs and adjustable handlebars & levers all adds up to the improved ergonomics of the bike.

Other than the changes mentioned above, the rest of the bike remains largely the same. It still utilises a 320 mm single-disc unit at the front equipped with radially mounted 4-piston ByBre calipers at the front coupled with 230 mm disc with a single-piston caliper at the rear.

Powering the supersport is the staple BS-VI compliant 373 cc, single-cylinder, DOHC engine putting out 43.5 PS at 9,000 RPM and 37 Nm of torque at 7,000 RPM. The engine will be connected to a 6-speed transmission aided by a slipper clutch and optional Quick-shifter. KTM also informs that there is a new engine map that increases torque and overall rideability.