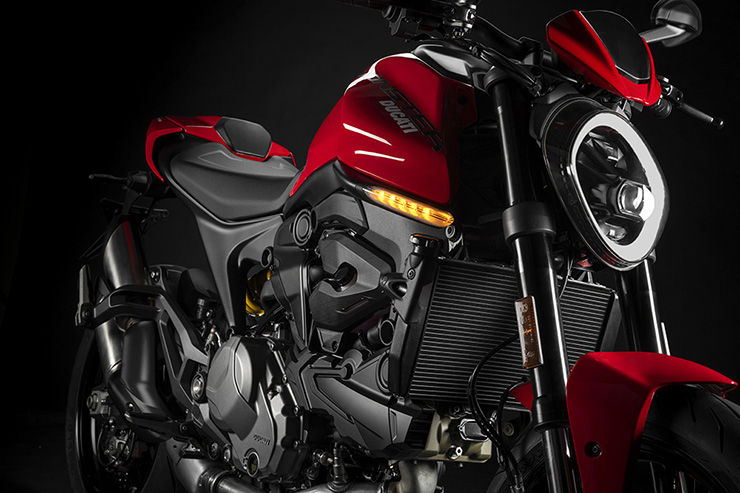 2021 Monster is the biggest update that the popular model has received since its launch way back in 1993. It comes in two variants…

The Monster range of motorcycles, which Ducati originally launched back in 1993, is the most successful brand for the company. For so many years, the company has produced models ranging from 400 cc to 1200 cc. However, we now have a new model for 2021, which has been named just ‘Monster’, devoid of any numbers as a suffix.

The new model that has been unveiled today comes with the most significant upgrade the range has ever seen. The new motorcycle comes with a Euro-5 (BS6) compliant, 937 cc, 90-degree, V-twin motor that produces 111 hp at 9250 rpm and 93 Nm at 6500 rpm. The engine is mated to a six-speed gearbox coming with a hydraulic clutch and bi-directional quick-shifter as standard.

The motorcycle ditches the old trellis frame in favour of an aluminum front frame. The company has taken weight-reduction measures in areas like swingarm, wheels, fuel tank, and even the engine (which now weighs 18 kilos less), to make the new Monster tip the scale at 166 kg. With this, it becomes one of the lightest motorcycles in the segment.

In terms of design, the Monster now gets a less muscular and slimmer stance than it had before. It has LED indicators integrated into the fuel-tank shroud at the front, and they now have an outward scroll effect when lit, just like you see on some premium cars.

The bike comes with a 4.3-inch TFT display as an instrument cluster, and three riding modes, including sport, touring, and urban mode. Among other features, it gets Ducati Multimedia System that enables smartphone connectivity, lean-angle sensitive ABS and traction controls, wheelie-control, and launch control.

The company has launched the new-gen bike in two variants – Monster and Monster+. While the former has been priced in the UK at £10,295, the latter costs a few hundred pounds more. As for India, rumors suggest the arrival of the bike sometime later next year…