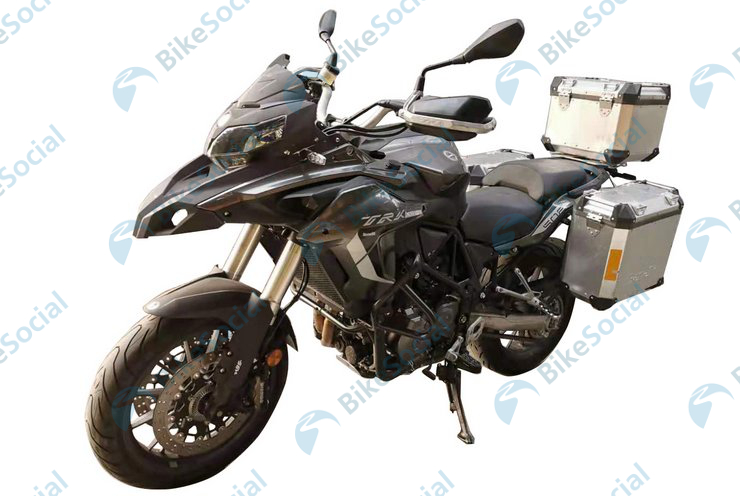 2020 TRK502 BS6 launch in India expected soon. For now we have spy pics from China suggesting minor changes to hardware…

TRK 502 is one of the most interesting mid-capacity adventure tourer in India, and probably in most of the markets where it is sold. A new updated motorcycle has been spotted somewhere in China which reveals that Benelli is working on improving the ‘fast-becoming-popular‘ motorcycle.

The biggest change is the new aluminium swingarm which will replace the steel tubular swingarm of the current version. This will have a direct connection with sturdiness considering that the company is promoting it as a soft off-roader.

Apart from this, this TRK 502 is wearing new knuckle guards with a metal cover to provide better protection to the hands. The report also suggests that it may be wearing Brembo calipers instead of the Benelli branded units on the existing version.

Additionally, in India Benelli will have to update the engine to Bharat Stage 6 (which is roughly equivalent to Euro 5) compliance to be able to sell it after the March 31st, 2020 deadline.

Benelli sells both the TRK502 and its more harcore version TRK502X in India. Both of them are powered by an in-line 2-cylinder DOHC, liquid cooled, 8-valve, 500cc engine which is capable of producing 47.5 PS of peak power at 8500 rpm and 46 Nm of max torque at 6000 rpm. These numbers may change a little once this motorcycle gains BS6 compliance.

Benelli’s Next Launch in India Will be 502C [Speculation]

Benelli has also hinted at TRK251 – younger sibling of the 502, for India and we expect it to roll out sometime this year. It has recently launched the very interesting Imperiale 400 – a direct rival against Classic 350 and other retro classics. You can read its detailed first ride review here.