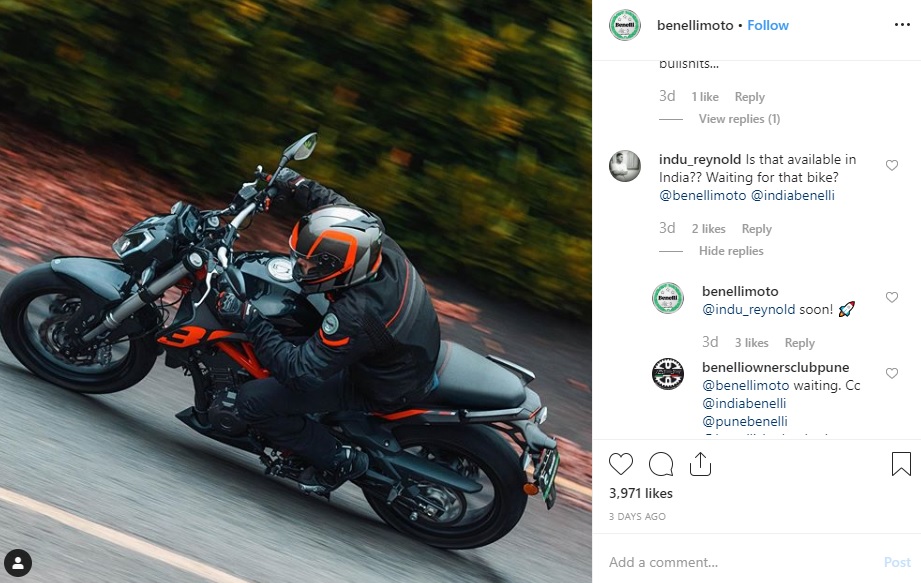 In the 300cc space, Benelli currently sells the twin cylinder naked TNT 300 as well as the full faired 302R in India. The TNT has been around for some years and has started to look dated. Internationally, a new motorcycle 302S has joined the portfolio which looks a lot more modern and is expected to replace the ageing TNT in most or all markets of the world.

In a latest update, a confirmation of the motorcycle’s entry into India was made by Benelli Global’s Instagram page. On a picture of a 302S, a user asked the Insta handle – “Is that available in India? Waiting for that bike?” To this, the handle replied – “SOON“, confirming that the motorcycle is in pipeline for our market.

302S, then, is expected to be launched in India as a new-gen model of the TNT 300 when the existing BSIV variant will be updated. In short, we believe the current TNT is living its last life and will not be upgraded to the BSVI emission norms. Its place will be taken by this 302S. Estimated timelines – early next year!

The roadster is powered by the same 300cc parallel twin engine but it produces 37.5 bhp of peak power and 25.6 Nm of maximum torque in USA (where the TNT churns 32.2 bhp of power). In terms of design changes, the 302S is an aggressive looker and sports LEDs all around and is equipped with 41 mm upside down front forks, 260 mm dual dics upfront and a single 240 mm rotor at the rear.