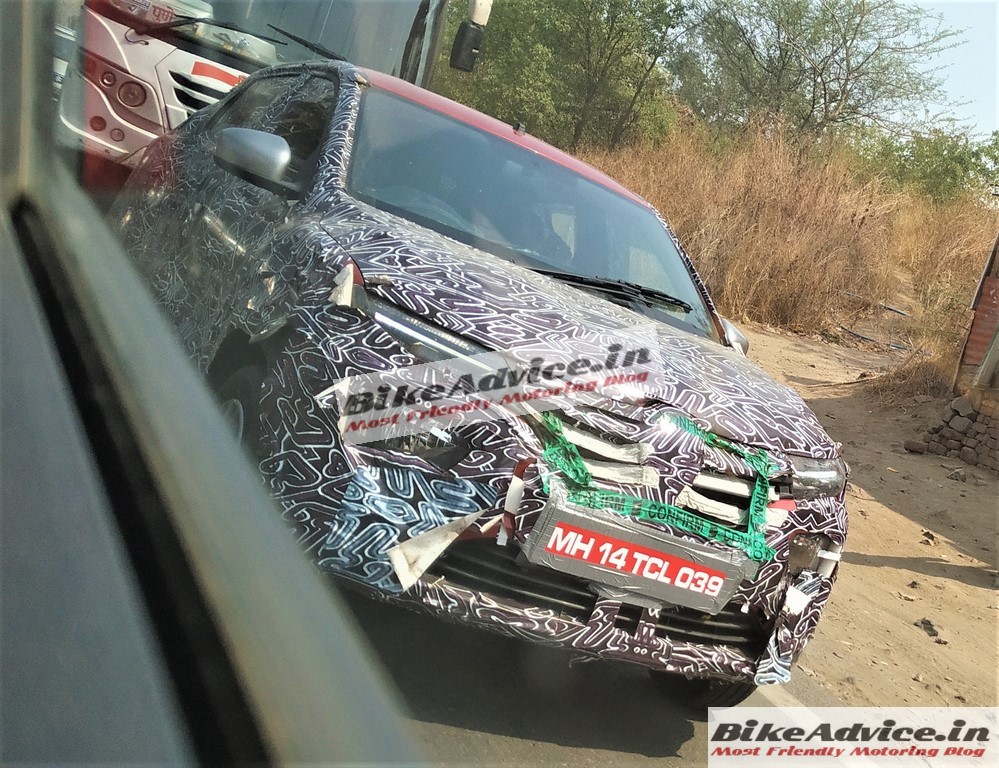 We have the exclusive 2019 Kwid facelift spy pics from India which, we believe, will be inspired from the Kwid K-ZE all-electric car which was unveiled very recently…

“What is a car story doing on BikeAdvice?” you may ask; but let me share with you that this is an experiment. We would do only the very important ones and promise not to break the flow of bike news and reviews that we have been doing for the last 11-12 years of BikeAdvice’s existence! We will continue with this idea if it adds to the overall value of our webzine else we will kill it after a certain period of time. Your views on this will decide if BikeAdvice will continue with this genre and so, they are more than welcome 🙂 .

Coming to the crux of the story, our reader Shaila Chavan has shared some very interesting spy pics of a completely camouflaged car from the Pune Bangalore highway. We carefully observed and cancelled out the possibilities; and after a lot of very close observations we could nail it – it is the new Kwid!

Now, many of you would want to believe that this is the Kwid K-ZE or the Kwid Electric which Renault unveiled barely a few days back at the Shanghai Motor Show. While I won’t completely nudge that possibility out, but I believe this could, instead, be the facelift of the current version.

To further my claim, I have two non-conclusive arguments. One, it will be too early for Renault to venture into the electric car space and I personally believe they may not want to be the very first in the entry car space simply because of the eventual price of the end model (and obviously, the lack of volumes that this segment is expected to garner initially). Maruti has, recently, said that the price of their entry level WagonR electric could run upto Rs 12 Lakhs! Renault may want someone to make such a market before diving in.

And two, this has a proper fuel lid and at its original position. The Renault K-ZE showcased so far has its electric charging point on the front fender. Although, it is heavily camouflaged but we could not spot any kind of a kink on the right side front fender of the test mule. The K-ZE was spotted recently in China and we could not sneak a fuel lid under all that camouflage.

Bajaj to Launch 373cc Husqvarnas Within 4-7 Months in India

Plus, the car in our spy pics has a different grille from the K-ZE. So, I personally believe, that this could, instead, be the Kwid facelift with a very imposing front. Even if it turns out to be the Renault Electric, it is a big surprise that Renault has some aggressive plans for our market! Another point to note here is that the car is running on MH-14 test number plates which corresponds to Pune (more specifically Pimpri-Chinchwad) which could bring in the ARAI into picture, which, in turn, may signify validation tests from the Automotive regulatory body.