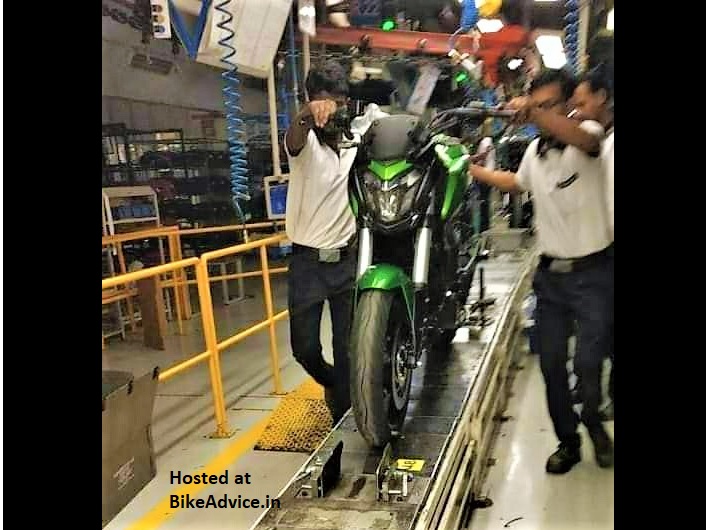 Dominar green colour was already on offer on the Russia-spec motorcycle. It is the fourth shade that has been revealed for the upcoming model.

There have been various indicators that the 2019 Dominar 400’s launch is round the corner – we have discussed about three of them here. And pics on this page confirm that Bajaj has commenced production of the new model.

The 2019 Dominar has been spotted in a new metallic Green colour, which kind of, looks odd on the motorcycle. Presence of upside down front forks give away the fact that this is the upcoming version and those front MRF Revz FC1 reveal that this, in all probability, is an India-spec unit. Which means that Bajaj may introduce the new Dominar in this green shade in the domestic market.

Bajaj was already offering the same/similar colour in Russia as a special edition.

With this update, we have seen the new Dominar in four colours – Matte black, red, white (which is making a comeback – spy pics) and this green. It remains to be seen if there are any more colours under works and what shades will the domestic version be offered with.

The 2019 Dominar 400 will be launched soon with many prominent feature additions like inverted front forks, double-barrel exhaust (which may result in better exhaust note), split instrument cluster with more information like gear indicator etc and there is a possibility of minor tweaks to the engine as well.

As a result of so many changes, we expect the motorcycle to move up the price ladder and be presented as a more premium option in the 250-400 cc sports segment which will also see the arrival of Honda CB300R on 8th February.