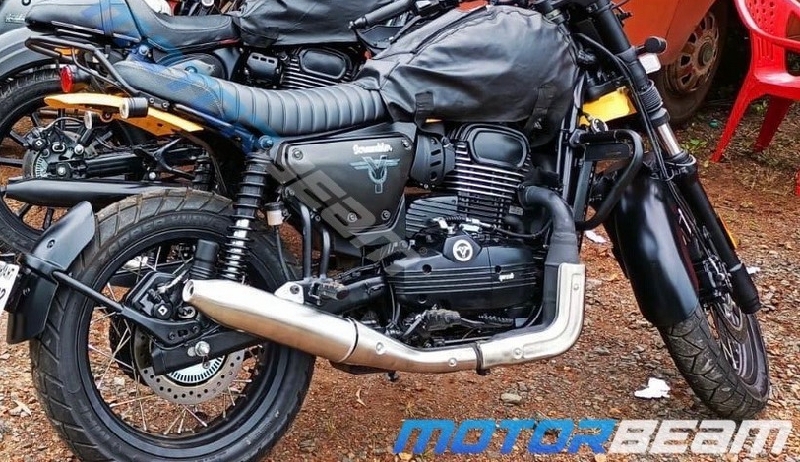 This latest Yezdi scrambler spy pic clears how will the upcoming model look in production. There is the third model as well in this set…

The recent tweet by founder of Classic Legends – Anupam Thareja – announcing the resurrection of legendary Yezdi brand, brought a wave of nostalgia and hope in the hearts of all Indian motorcyclists. This, along with a few earlier spy pics suggested that the company may debut with as many as three motorcycles.

And it appears this will be true as we have spy pics of all three now. We have talked about the Adventure model yesterday. Today, let us share, spy pics of the scrambler along with the retro classic which could be called as Roadking.

An online portal has published the first (almost) undisguised look of the Yezdi Scrambler along with potential future launches by the brand Yezdi.

The undisguised production-ready scrambler in the picture boasts a single-piece ribbed and curved seat with plastic cover just below it bearing the bold Yezdi logo. The bike seems to be equipped with high-set fenders, twin exhausts, circular mirrors and telescopic front suspension with twin rear shocks.

Furthermore, the Scrambler seems to have the same circular headlight unit as the spied Yezdi Adventure motorcycle as well as being powered by the same power-mill. The wheels are wire-spoked and bear the profile to be used on tarmac and dirt-trails.

The two motorcycles parked behind the scrambler seem to be the two versions of the upcoming Roadking variants which will directly rival the Royal Enfields and Honda’s CB350.

Both the upcoming models sport alloy wheels, split seating and similar primary bodywork. However, the Roadking models farthest in the picture appears to have a taller and upright seating position, a windscreen, a backrest for the pillion, standard mirrors and aluminium exhaust. The bike in the middle has bar-end mirrors, no back rest for the pillion and has a blacked-out exhaust and body-work.

These three upcoming Yezdi models are expected to be equipped by the higher powered 334 cc, single-cylinder, liquid-cooled engines that, on the Perak, make 30.64 PS and 32.74 Nm. The same 6-speed gearbox is expected to be carried over.

The models looks absolutely production ready and these pics may have been snapped at some promotional shoot. This means that Yezdi’s official (re)launch can be expected anytime soon…