Fellas! Let me introduce you my babe which I named her as “Scarlett”. I see some raised eyebrows, as in “what’s with the name?” Yeah, you are right! As famous writer Shakespeare once said “What’s in the name?” you can call your dream machine, whatever you want. I named her so simply because she is smashing Red in attire. After 11 months and 7500 kms+, I have all but just one line to ponder and it’s “An Experience beyond words…” 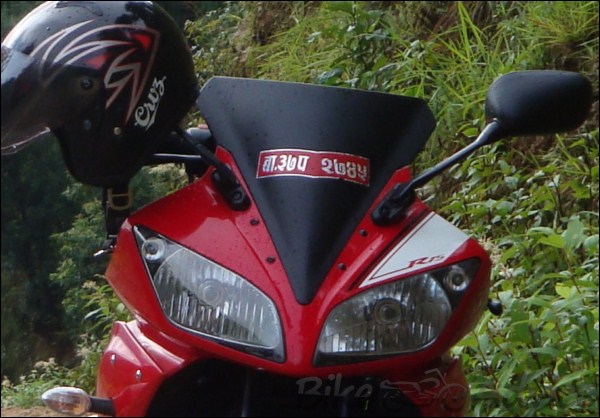 I am a software engineer and this bike belongs to all me, every penny that adds to it comes from a boy working 40 hours per week in his cubicle. And, yeah, I can proudly tell, she’s mine. Before making this review retarded and lame, by intimating the tried and tested method of adding review through different sections likes looks, performance, handling, mileage etc. I would rather take you through my experience.

Well, regarding the last section “Mileage” which is the most irritating question I ever have to answer, probably till the time I own this babe. My answer to those bunches of people is, do you really care about the mileage for a bike that does 0-60 in 5.2 secs and have a top whack of 138kmph. Personally, I didn’t, when I had made up my mind to own it.

Let me tell you my experience which is very hard for me to deliver in words, I will give you the top most reasons why you should own YZF-R15 (read R-One-Five). I get annoyed by people when they pronounce it as R-Fifteen. I don’t have to go on and brag about its look, yes! Love it or hate it, it is the best looking bike this country has undermining the higher categories of so called superbikes. 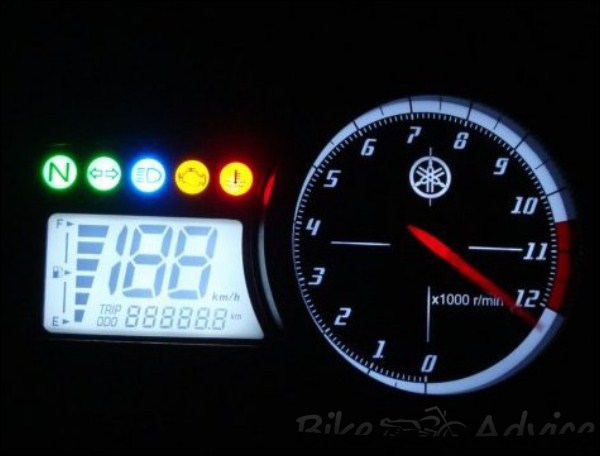 Boy! I love its nicely chiseled body shapes, the white digital console which makes me fall for it on each ride, the twin head light is another topping on ice and they all contribute towards its looks. Even after more than 2 years of its launch, I feel great to find people looking over it time over again when am waiting for traffic signal lights.

I have done many tour/ride apart from my daily commuting via busy city routes. I have taken it on long stretch roads, sharp and twistees’, slopes, hills, rough roads, thick debris of stone graveled road, slippery roads, you just name it. Every miles covered on it brings more smile to my face. The Handling of this bike is one of the most promising USP endowed with some assistance from Delta-box Frame, link-type mono suspension and clip-on handlebars. Get ready to get married with some initial wrist pains, which vanishes with time.

One must need some riding adjustment to do but once you are acquainted with it, trust me you will at least think thrice before sitting on any other bike other than R15. The handling and cornering takes this bike to the next level. I remember touching the road with the tip of my shoe while cornering when I was a little high. By ‘high’ I mean when am ecstatic. But, that confidence level is little down at this moment after my last accident.

Now people often complain that it loses on maneuverability due to its bulkiness on the front section so and so. But, with due respect, the bike handles like dream on city. Thanks to the clip on handle-bars and nicely proportioned CG where the rider is always in command of her instead of the other way round in most of the other bikes. The fickle-ability and swift escape in the busiest traffic is the envious sight that one can give to those in their four-wheels. The only thing that I wish to part away is its hugely extended mirror which serves its purpose well. They sometime hinder my movement in the busy traffic. I am thinking of replacing them with the one’s that of Pulsar 220. 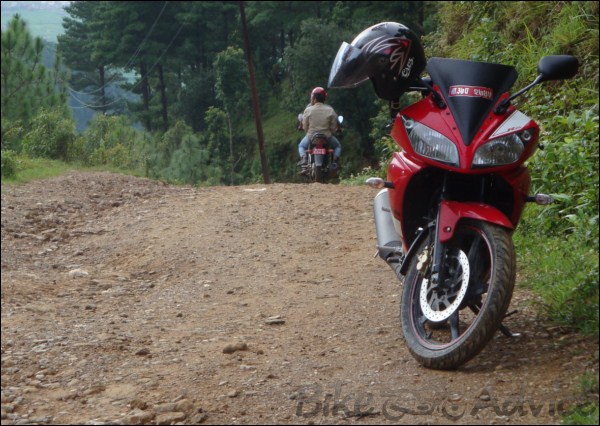 The other thing that disappoints the riders is the lack of low-end grunt/torque which you normally require in the stop and go traffic. It’s not that its way too low, it’s just that you know, you sometime wish that it was lot better. You have to keep the needle on the higher-end of rev meter while shifting gears in order not to be in the tardy zone. However, it can always smoke its nearest competitors in its class. I must say, the bike performs really well only after 5000 rpm and not many R15 owners will argue on that.

When I thought of buying a second bike for me, I was more interested towards the technology that it offered. Of course, for a fresher, the price tag was my first set-back and it was proving lethal while convincing my dad for the reason why I am tabling so much for a bike which nearly accounted to my annual income at that period. I was explaining to my dad about the technology involved in this bike.

And, I knew he wasn’t someone just to brag about because my dad in his young days was biking enthusiast too. Meanwhile, my dad expressed his concerned about the lack of crash guard. So, instead he wanted me to change my mind to Fazer or some other bikes. But then, given an option of selling out some extra thousands for Fuel-Injected, liquid-cooled, 4 valve, forged piston, rear disc (I can go on….) I didn’t wanted to make that rational decision.

Here comes my best section. The bike is really suited for highway and track roads regardless of its engine capacity. You can make full use of the extra gears that it has been supplied with. Ride it below 60kmph on highway and you are making a mockery out of yourself. No, I am not supporting speed riding but you got to make full use of those six-speed transmissions and the 4 valves right!

The bike is silk smooth and one can ride easily without the engine giving up at the speed zone of 100kmph. The bike’s dual disc brakes help boosting the confidence level of the rider. Tap the brake and you have her stand still without going that extra distance. The brakes are superb and are a much needed addition in case; you have to ram the brakes. The best part of this bike is that it starts to give in more input from the point where most of the other bikes starts giving up and start losing their breath.

Wring the throttle and you will feel that it’s demanding more command from its fellow rider. The aero-dynamics are neatly standardized, crouch on the tank and you have absolutely zero air hitting you, I guess, that’s what Yamaha were talking about “Human-Machine Harmony”.

Personally, I have hit 127kmph on my speedometer while I was on a stretch road. Not that it was the end of what’s being bragged about, it’s just that I ran out of roads. I will be hitting the highway tomorrow and see if I can work on ameliorating my speeding milestone. However, when I first did a solo ride of 300kms, I faced a wrist pain issue. I had to take some short breaks too often. May be that time, I was new to the machine and may be my riding technique was too harsh. Those wrist pains are now long gone, I hardly have any pains or let’s just say I have learnt to handle her well now.

If you single out R15 based on its segment and class then you will not find any bike coming anywhere near to it. One have to change the sentence on the RVM from “Objects in the mirror are closer than they appear” to “Objects in the mirror are way at a distance that they are too shy to be seen” With its superb power to weight ratio and all the technologies that’s involved, this bike just takes the biking to the next level.

Now, I won’t write the performance figure, top speed, speed drag test etc. I leave that to Bikeadvice.in and they already have a wonderful article where R15 is matched with Pulsar 220, RTR 180 and Karizma ZMR. The post can be accessed at the section several pages before this post. I was full of smile and was never been more proud after reading it.

If you are looking for a bike that simply takes you from point A to point B then you are in the wrong section, with due respect. Contradictorily, if you are a biking enthusiast who knows something about the technology that runs under you and not just ride for the sake of riding then this bike is just meant for you. Till now, I have been replacing only the engine oil and changed its oil filter once.

This bike is maintenance free only till you handle it properly. It needs lot of care and attention and yeah, its spare parts costs are slightly on the higher end. By saying that it needs lot of care and attention, I meant that you got to love your machine. Don’t worry about the engine noise and roughness that you fear to encounter when revved high. This is a high revving bike and it won’t mind if you time and again shift your gears at the region of 7k band.

Special care is needed for the open-chains during the monsoon. It needs to be lube well and if not, be ready to face the music of constant creak and unwanted noises. Also, if you ride only in cities then I would like you to think and analyze your decision because without taking it to higher band of 7k rpm and more, you will not enjoy riding one. The headlight illumination is not as one would expect from a bike that possess dual headlights, it’s slightly on the disappointing end.

Truly, if someone gives me an offer to part away with this bike and get myself a new one. I would simply deny it, if I were to buy any bike that is there in the market till date then I would happily part away with my R15 for another R15. True to my words, you will soon be saying what I have to say “An experience beyond words…”