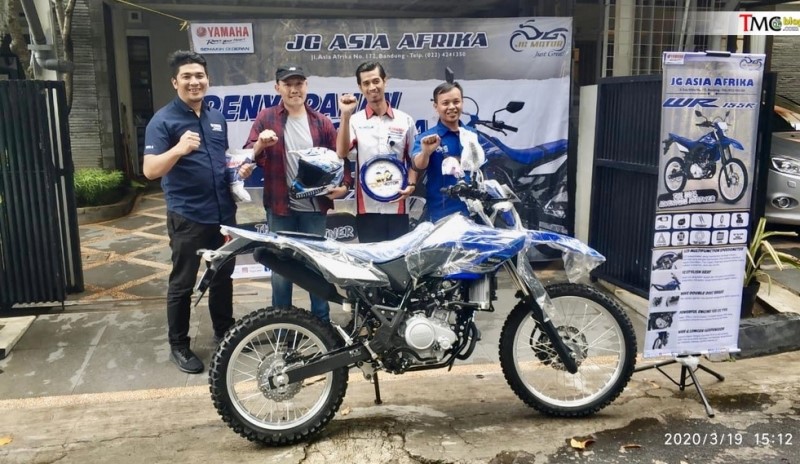 Yamaha sells its dual sport motorcycles under the ‘WR’ brand name. Unlike its ‘Tracer’ branded adventure tourers, they (WRs) are more off-road oriented. The smallest motorcycle in this range so far was the WR250 – which, as its name suggests, is powered by a quarter liter engine. However, Yamaha has brought ‘fun’ down the pecking order; to the 150 cc segment.

In a surprise, in December 2019, Yamaha unveiled the all new WR155 which is the next motorcycle in the company’s extremely popular 155 platform. It sports the same 155 cc engine that powers our YZF-R15. The first market to get this dual-sport motorcycle is Indonesia. In a latest update, after taking bookings earlier this year, Yamaha Indonesia has commenced deliveries of the motorcycle to its customers.

According to an online report, distribution to end customers have begun in the Western Java region in Indonesia. Yamaha directly dispatched the motorcycles to a few buyers’ homes whereas it handed over the keys to some inside dealerships as a ceremonial experience.

WR155 is mounted on a semi double cradle frame which produces 16.73 PS of peak power and 14.3 Nm of max torque. It gets 21-18 inch tyre combination along with knobby rubbers. Suspension travel is higher at both front and rear.

In terms of placement, the WR155 is kept just a wee bit higher than the sports R15. After conversion, it costs about 1.72 Lakh in INR, slightly higher than 1.68 Lakh of the R15 in Indonesia. Can we expect Yamaha to consider it for our Indian market? More importantly, will we accept it at around Rs 1.60 Lakh?