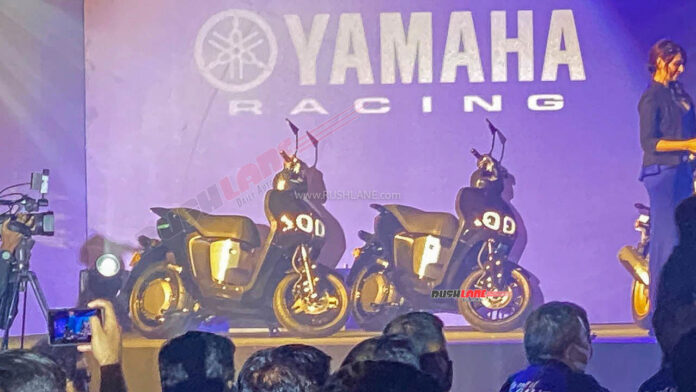 These two could be upcoming Yamaha electric scooters for India. Both Neo’s and E01 are brand new products and are from the international range…

So, there was a lot of curiosity and chatter when a ‘Block Your Date’ invite for 11th April from Yamaha India, to their dealers, got leaked on the interweb.

We shared with you our own speculations regarding what could this event hold, wondering if Yamaha India would showcase their newly introduced electric scooters to their network of dealers.

And Voila! Thanks to some images shared by an online portal, it did happen. Yamaha India introduced and showcased their new E01 and Neo’s electric scooters to their dealers at an special event which took place on 11th of April. Alongside the e-scooters, Yamaha also launched the much awaited MT-15 Version 2.0 and YZF-R15 M World GP 60th Anniversary Edition.

It took a while for Yamaha to step into the EV world. It was back in 2018 when Yamaha partnered with Taiwan based Gogoro. That is when we got to know that the Jap is working on its own e-scooters. Then in the 2019 Tokyo Motor show, Yamaha for the first time showcased their own iteration of EVs in the form of the E01 and E02 concept.

In March of 2022 Yamaha globally unveiled their EV platform, highlighted with the colour Aqua (Blue+Green) and showed a variety of electric two-wheelers. Out of the two concepts, the Neo’s made its global debut in the European market last month itself.

The Yamaha Neo’s electric scooter is the production version of the E02 concept showcased during the 2019 Tokyo Motor Show. The Neo’s scooter follows the conventional step-through design and features the novel removable and swappable battery which definitely is a result of their partnership with Gogoro. It is the company’s greener take on a 50cc-equivalent petrol powered scooter and probably the most appropriate choice to be introduced in our country.

The Neo’s is powered by the company’s latest Yamaha Integrated Power Unit (YIPU) which is a direct-drive air-cooled brushless electric motor which significantly decreases mechanical power loss. The removable battery that powers the motor and holds the charge is a 1 kW, 50.4V/19.2Ah lithium-ion battery which weighs 8kg and is located below the seat in the centre of the chassis. The electric scooter claims to cover 37 km in single-battery configuration and 68 km when combined with a second optional battery. The top-speed it can reach is 40 km/h.

The other concept they showcased at the event is the popular E01 concept, which has been in recent news where it was being tested in Japan. This electric scooter is designed to resemble the TMAX and NMAX IC powered cousins but features various futuristic design elements. The E01 concept has been designed to provide the practicality and versatility of a 125cc-equivalent scooter to the masses.

The E01 concept is still a little away from being launched. Some key features that are expected to be offered by the E01 include full digital instrumentation, Bluetooth connectivity and keyless ignition. It will probably have three ride modes – Eco, Normal and Power.

The maximum range we expect with a single battery pack is expected to be around 70-80 km on a full charge. In International markets, E01 is likely to boast a 11kW (15 HP) motor.

Chances are that Yamaha were showcasing its electric prospects for India to its dealer partners. Rivals like Bajaj and TVS are already in the market with their electric products; Hero is about to join soon and Suzuki is also testing its version of electric scooter in India.