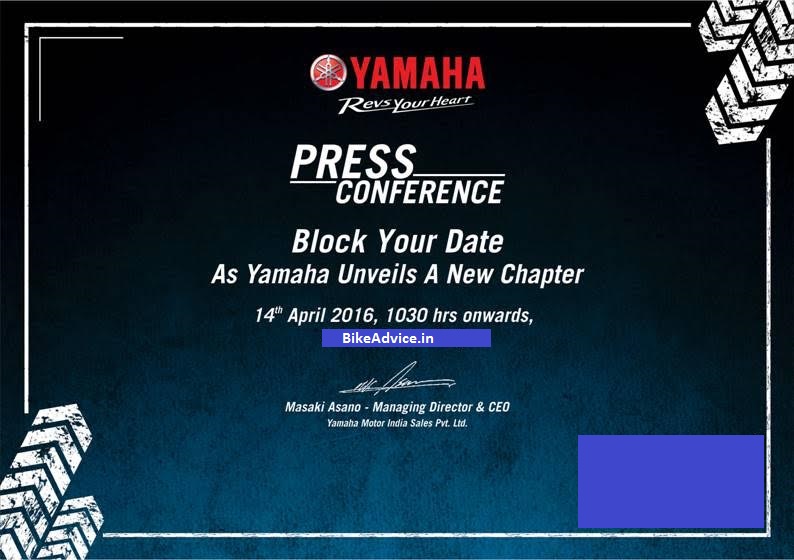 Yamaha has shot us an official invite to block our date for an event scheduled on the 14th of April. They have also announced that Yamaha’s Managing Director Masaki Asano as well as Roy Kurian (Vice President Sales & Marketing) will be present at the Press Conference.

As always, the invite note reads – “Block your date as Yamaha unveils a New Chapter”

But before you get excited with that phrase “unveils a new Chapter”, let us inform you that for almost all product launches Yamaha uses it.

Now, since we do not have any kind of confirmation about the event, let us decipher the possibilities. I am almost sure that this is some product launch and not another safety mascot unveiling.

Now, Yamaha has the Ray ZR (showcased & confirmed at Auto Expo) scheduled for launch. Apart from that, there are rumours of a bigger 200 cc M-Slaz (link to report), R15 V3 among others. Now, since the new R15 v2 in new colours was launched last month, it just can not be the R15 V3 so soon. It is more of a 2017 candidate in my books. M-Slaz 200 cc? Even if we consider it is under works, I don’t think Yamaha is bringing it here this early.

So, this, in all probability, is the launch of Ray ZR scooter. The tyre marks in the official invite match with the ones on the model displayed at the Expo and are kind of a giveaway. Moreover, the company has confirmed that they will focus on scooters this year, which may mean that there may not be any new exciting motorcycle model introductions, at least within this year.

For starters, Ray ZR will be the most premium model in the Ray range and will become the first Yamaha scooter to come with front disc brake (most probably as an option). Cygnus Ray ZR has an uncanny resemblance with Honda’s Dio and hence looks muscular. It will come with the same 7.1 PS, 8.1 Nm 113 cc Blue Core engine and is targeted at the male customers.