I am really grateful to Mr.Viknesh Subramanium, the greatest photographer I have ever met for spending some quality time and Mr.Balamurali Mohan for lending me his brand new and scratch less R15 V2.0, knowing the fact that it will undergo a series of abuses and torture at my hands. 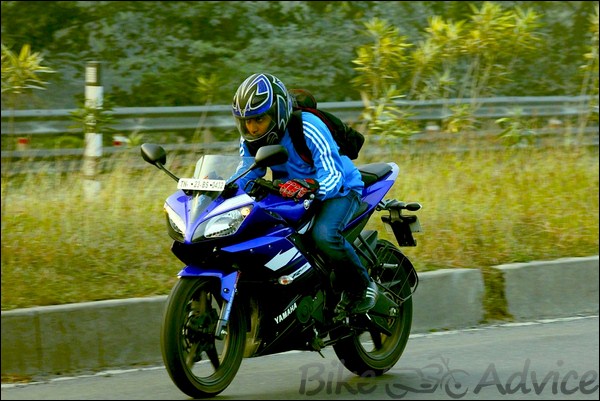 My name is Boon and this my second review in Bike Advice. Regular viewers might remember my review on Yamaha R15 V1.0 that was posted two years ago. Fortunately, that review has got an amazing response from all the viewers.

I hail from Arunachal Pradesh, The Land of Rising Sun in India. After completing matriculation, I came to Chennai six years ago for pursuing my higher studies. Having done my diploma successfully, now I’m in the final year of Engineering with ECE as a specification in Tagore Engineering College. I had to sell my wonderful and amazing R15 V1.0 (Joeled) few days back due to some personal problems. My plan is to buy a Yamaha YZF R1 within the next five years.

The Version 2.0 looks sharp and aggressive from all angles. The Yamaha engineers have taken a number of cues from the R125 and R6 while designing the bike. This bike is a result of the excellent feedback received from customers. There is a wider rear tire, a radial one (from MRF) that measures 130/70-R17, in response to a huge demand from the public. 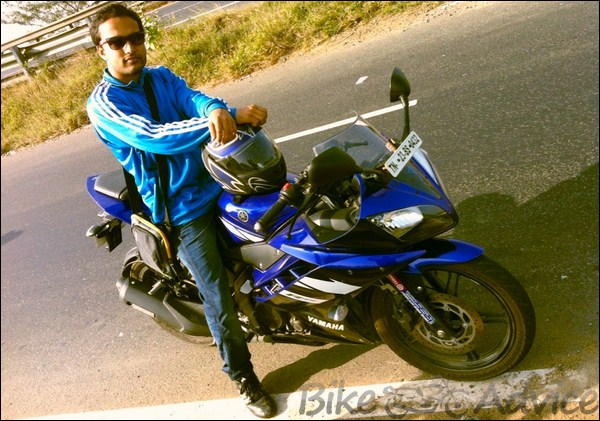 Along with that, even the front tire has been upsized to 90/80- R17. If you look into the fairing, you will notice the new mid-cowl which is wider and suits the wide front of the R15 even more better. The Version 2.0 comes with an all-new aluminum swing-arm, which not only makes the bike looks sportier, but also increases the stability of the bike.

As a whole I can say that the version 2.0 is what the public has always wanted, it is sportier, muscular and comes with a fatter tire. The build quality and finish of the Version 2.0 is top notch. No Indian made bike can come closer to Version 2.0 in terms of quality and finish. Each component whether it’s the fairing plastics, switches, seats or the tire hugger, has been precisely and neatly fitted.

Finally, I had to admit that for the first time I have seen a “Made-in-India” product that can challenge my MacBook Pro, iPod classic and iPhone 4 in terms of quality, finish and smooth performance. Yeah, I said it!

As I sit on the Version 2.0, I realize the changes made by Yamaha engineers to make the riding position sportier. Without wasting anymore time I press the start switch and rev the throttle to 5000 rpm. The bike immediately gains speed unlike my Version 1.0 (which underperforms at lower rpm), which shows that Yamaha has worked hard on the ECU to make the bike a lot more traffic friendly. 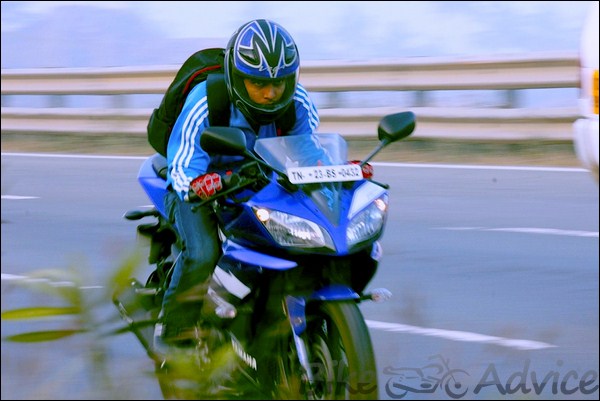 Well, Yamaha has been working silently on ECU since R15 was launched (initial batches of Version 1.0 came with Moric ECU and then Yamaha went for Denso ECU which was mere fuel efficient and is comparatively torquier) to make the riding experience a more comfortable and enjoyable. The road was empty and straight which allowed me to go for the top speed without any worries.

The bike has managed to hit 140 km/h, which has immediately made me suspicious. I was thinking how a bike that is 5 kg more bulky could be faster by 2 km/h than my Version 1.0. I slowed down the bike and again went to test the top speed once again. To my surprise, I was proved wrong once again as the bike has done 140 km/h once again. I had to convince myself by saying that I might have lost some weight due to pressures from studies, love affairs, careers etc.

Meanwhile Viknesh was readying his Cannon EOS 5D Mark II to take some snaps and once he was done, I started to ride the bike at different speeds, gears, throttle position. After an hour of ride and torturing the bike here is my take on the Chassis, engine handling and overall performance.

Just like its predecessor and other R-series bikes, the Version 2.0 comes with a Deltabox frame. Having ridden all the Indian made bikes, I have to admit that Deltabox frame is much more superior and gives the rider an amazing confidence for attacking sharp corners at high speeds with full confidence.

Deltabox frame was designed and developed by a Spanish engineer Mr. Antonio Cobas and was first seen in 1982 on Yamaha’s classic YZR 500. The concept is based on the fact that a triangular frame is more rigid than a conventional square frame. The engine of Version 2.0 is mounted on the frame in such a way (one on the head side, while two on the case side) that it becomes a singular structural member, hereby providing amazing stability, handling and a vibration free ride.

Another notable change is the new Aluminum swing-arm unlike the basic steel one. The swing-arm is longer than the older version and has thus resulted in a longer wheelbase too. Since the swing-arm is lighter, it has reduced the uneven weight on the rear mono-shock suspension. Yamaha has made some changes in the weight distribution too to suit the increased wheelbase.

Apart from this, the Version 2.0 comes with a larger 47 teeth rear sprockets (compared to the 42 teeth of Version 1.0) to compensate for the bigger tyres. The Version 2.0 has given me an excellent feedback about the road in which I was riding. Even though I was riding at a highway, I was able to feel even a small unevenness of the road, something I could not feel even on my Version 1.0. It shows how a real update should be done.

Yamaha engineers have done an excellent job by incorporating some cutting edge technologies on the bike. Moreover, I was able to bend my body forwards and backwards properly, unlike on my version 1.0 on which I had to go to the pillion to do so. Shifting my body from one side to another side in some sharp bends was an easy job. The Version 2.0 is an amazing handler and just like its predecessor, it has not disappointed me at all.

The Version 2.0 comes with a 149.8cc liquid cooled, fuel-injected engine that produces maximum power of 17ps at 8,500 rpm and maximum torque of 15 Nm at 7,500 rpm. Liquid cooling is very important for high revving bikes as it keeps the engine cool at higher rpm, which prevents the loss of power and efficiency.

The radiator does the job of keeping the engine cooled as the coolant is constantly circulated between radiator and the cylinder block when the engine is running. The radiator dissipates all the heat generated to the atmosphere. The 149.8 cc cylinder is made up of DiASil which is an all-aluminum cylinder made possible by an exclusive Yamaha aluminum forging technology.

As it uses a 20% silicon-aluminum alloy, it has excellent heat dissipation qualities and reduces the engine weight at the same time. Therefore the user need not have to go for costly maintenance like sleeve replacements after riding say some 20,000 kilometers. Another advantage of DiASil cylinder is that the rider gets improved fuel economy. As cylinder, piston and surrounding parts are all made of aluminum, cooling is quick and efficient.

I rode the bike for nearly one and half hour at high rpm and the bike behaved exactly the same way. No change in power, performance and neither did any warning light glow. Bala says that whenever he goes to his native, he rides above 100 kmph continuously for three hours and till date he has never felt any kind of problem either from the engine or from the fairings (vibrations).

The Version 2.0 comes with a reworked open loop engine control unit that improves the pickup and fuel economy as claimed by Yamaha. The Version 2.0 starts to pull from lower rpm unlike my Version 1.0, which has always refused to pull from below 5000 rpm. By doing that the Version 2.0 losses some of its Racing characteristics and behaves more like a naked bike.

But the rider will get the advantage in traffic where the bike will spend 90 percent of its lifetime. As mentioned above, the ECU is still an open loop that means it has not got any Oxygen (Lambda) sensor. So it works by reading values from multidimensional maps (Look up tables), using inputs values, engine speed and air/fuel mixture ratio calculated from the signals coming out from the signal.

I have some friends in Arunachal Pradesh who have bought the Version 2.0 few months ago. They tells me that no matter how cold the weather is, unlike other four-stroke bikes, they have never faced starting problem. That clearly shows the quality of engineering that Yamaha has implemented in the Version 2.0 . Thank you Yamaha for giving us a quality product.

The Version 2.0 is equipped with sensors that continuously monitors the engine and provides continuous feedback to the engine control unit. They are-

The ECU reads all the input values from the sensors and decides the correct value required at the given condition for running the bike smoothly without losing any power. 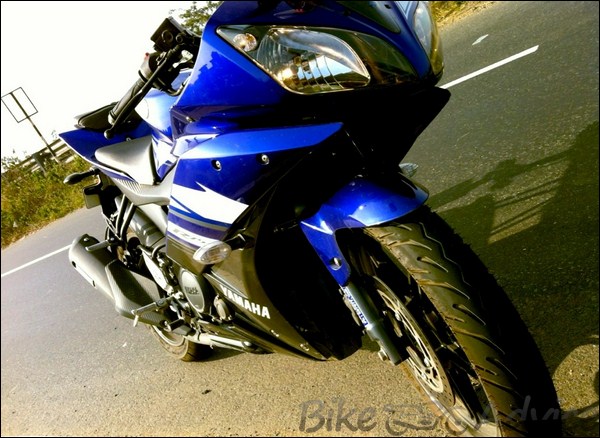 The Version 2.0 is an amazing and powerful 150cc bike designed by Yamaha for the Indian rider (If you don’t believe my words then read what Jorge Lorenzo has said after riding the same in Buddh international circuit ). They have taken all the feedback from the customers and designed a tremendous updated (no sticker tagging and silly abbreviation jobs) bike that very few companies will do.

At Rupees 1.19 lakh, Version 2.0 is the best VFM bike that you can afford without any worries. Being a proud rider of R15 for the past two years, I know what Yamaha stands for. Its not about displacement and top speed, its about the quality and how you attain that top speed. Right now there are many higher displacement bikes that are available in the market but when it comes to quality, no products can come close to it.

Another good thing about Yamaha is that they keeps an eye on what customers are saying, and try to fulfill their wish by launching a good update. This bike is for those who want quality and performance. This bike is for those who want to start and arrive alone. In the end I can say that R15 Version 2.0 is an amazing piece of machine that is designed for only one thing, to race. Mr. Balamurali you are really a lucky guy to owe this masterpiece. 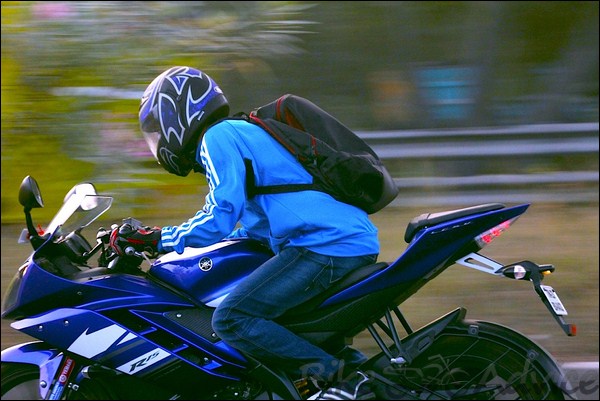 Finally I would like to request all the riders to wear Helmet and ride responsively. Never engage yourself in a race on the public road just to prove that your bike is better than other riders. Remember that no bike is perfect in this world and every bike has certain pros and cons. Even the mighty Yamaha YZF R1 will lose to a Splendor in terms of mileage.

Always remember that there is someone waiting for you in home dying to see you. It may be your parents, sister, friends or a lover. Arrive alone, Arrive alive.