Suman has submitted this review in our Ownership Review Contest No 13, ensuring himself an assured prize. The contest also offers a chance to win Riding Jacket, Helmet and more…Here are all the details.

I was on the way back from Munnar to Trivandrum, riding Honda CB Twister, and it was begging me to take easy, it was running out of breath on the highway, and with high frequency handle bar vibrations my palms were almost numb. I was terribly missing the presence of fifth gear. Then and there I decided that I have to upgrade. 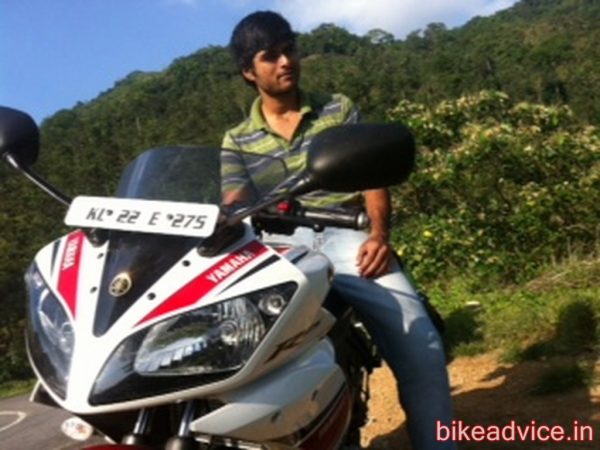 My name is Suman Satpathy and I live in Trivandrum, I am a software engineer by profession. Life can be lot easier and fun if you have a motorcycle with you. Twister was a gift from my father, who promised that he would buy me a bike after I get a job. I had high hopes, but my father had different thought in his mind. He always believed that one has to graduate from low capacity bikes to high capacity bikes. Twister was a very good city bike with awesome handling, good fuel efficiency and Honda’s aftermarket service was great, but what I needed was an all-rounder.BIKES SHORTLISTED:

I started saving money and at the same time I was reading the reviews about all the bikes. I had my list of requirements ready; the bike must have liquid cooling and fuel injection. Based on these requirements I had five bikes in my mind out of which I have to choose one.

1) Honda CBR 250 :- My dad promised he would give me his one year old bike as he was about to upgrade, it was freaking fast for my taste (imagine from twister to CBR 250). But somehow I did not like the handling and found the suspension too soft for my liking. But still had the option on.

2) Honda CBR 150 :- I liked the bike, heard good reviews, but the showroom people told they did not have any CBR150 for test ride. The price was very high and some basic features like headlight flasher and engine kill switch were missing. So rejected the option then and there.

3) Pulsar 200NS:- I went to showroom, after seeing the bike I fell in love instantly, I was asked to come after a week for test ride. I was almost sure this bike will be going to be the one. When I visited the showroom after a week, though they had the bike ready, but a big build sales guy sat behind me, and I was allowed to ride only for few hundred meters. Initially I had apprehension about pulsars, so did not want to buy the bike with doubts in mind. So this option was rejected.

4) KTM Duke200 :- It’s crazy bike, light weight, awesome power, it just begs you to push hard to the limit. But I did not like the short gearing, and the seating position was not of my taste. I would love to ride the bike occasionally, but I felt I could not live with the bike on daily basis.

5) Yamaha R15 :- Well I knew that this bike is great, and I was completely obsessed with the bike from the day it was launched. I rode my friends R15 V1, the best part was handling and top end performance, but at that time V1 was phased out, anyway the reviews were good for V2.

So it has to be the CBR250 or Yamaha R15, head said CBR, heart said R15. In October 15th 2012, I went to the showroom to have a look at the bike. Initially I had blue colour in mind. I always considered myself as a person, who would not pay extra for looks, but then I saw the limited edition white and red which was available with Rs. 5000/- extra on the top of standard model, booked the bike then and there. 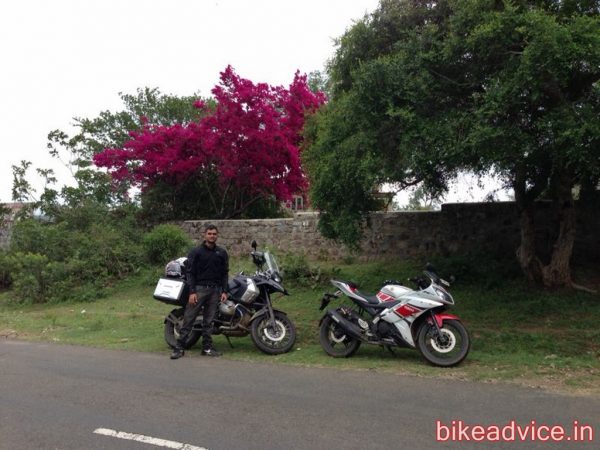 I was informed that the bike will be delivered on October 29th 2012. And yes, the waiting period was too hard on me, after two weeks of sleepless nights I got the bike as promised. With a small problem like the tank pad was kind of detached from one side, the sales people told that at the time of first service they will fix it (which they never did). I could have protested but I was so eager to ride the bike that took it silently.

I rode the bike as it was instructed in the manual book during the engine run in period. In ten days I completed 1000 km, got it serviced and the romance began.

It took few weeks to get used to the sitting posture of the bike. Commuting is a completely joy with this bike, and twisties are heaven. The bike is made for cornering as a one of the main criteria. Each day in the morning I get up with the excitement that I will ride my bike to office. In office I just wait eagerly till evening so that I can go for a short ride to the sea beaches.

Initially I had feared that whether the bike can make it or not (after all I have to ride with a 1200cc beast). But to my surprise the bike took all the torture very well, not a single issue after riding it hard through Highways or Mountains.

While climbing the hairpin curves the bike struggled, so I used to give sufficient rest to it. It took all the abuse. It’s like you take care of the bike and it will take care of your fun. I have to say the engine is fantastic; just one service after the ride and the bike is back to normal condition.

Service cost is not very high; the free services costs around 600 to 700 rupees and the paid services cost 1000 to 1200 rupees. But servicing interval is irritating, that is 3000 Km or 70 days. I had to change switch gears of both the handles because the switches were not working, the brake pads were changed after 15000 Kms.

We all are aware of pros about the bike, so first I will discuss about the things I do not like: 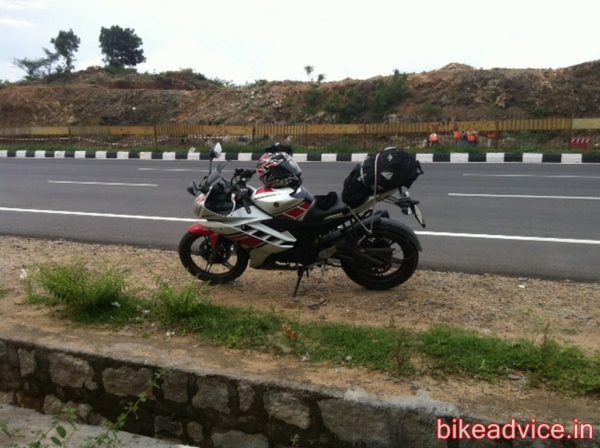 I hope readers are not puzzled to see long list of cons. Let me assure you, once you ride the bike, the fun to ride factor will make you forget about all the negative points. 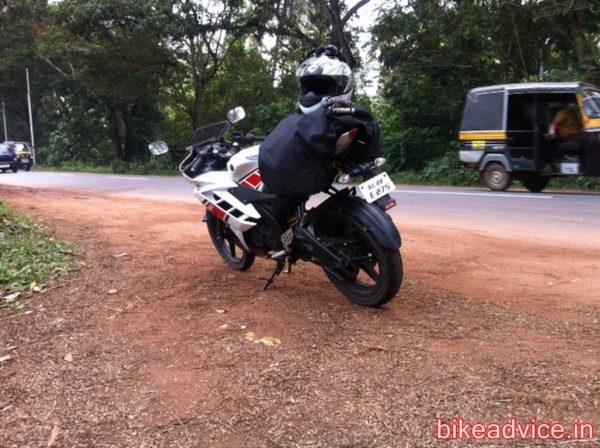 I have installed K&N after market air filter with the hope of better performance, but the gain is so marginal that you will get used to it soon, but I feel the torque figures have increased. One of my friends has installed a conical Piper cross air filter and removed the air filter box. If you do so then you will get noticeable performance gain but in a long run it is not good for the engine as the setup will introduce dust particles inside the engine.

When R15 was launched in Indian market it was one of a kind bike, but now better bikes are available in market with more power. I would say this is a teenage bike, where you are new to biking and you weigh around 60 to 65 kg, you get a bike with super sports ergonomics, and decent acceleration. But if you are a in the wrong side of 30s and weigh around 75 kgs or more then you need a powerful motorcycle.

I am eagerly waiting for R25.