Mission 10,000 km, which according to Yamaha India is “a holistic expedition in which the participants will embark on a journey of self-discovery aboard the FZS FI version 2.0, will start on 14 September 2014 ie tomorrow. Twenty lucky riders will get to live their dream (at Yamaha India’s expense) and they were chosen from over a thousand applicants from Mumbai, Delhi, Pune, Chandigarh, Bangalore, Kochi, Chennai, Kolkata, and Hyderabad.

The 20 riders will meet in Delhi and will be divided into two teams of 10 bikers each. The teams will be flagged off from India Gate by John Abraham and, Miss India 2014, Koyal Rana. One team would explore the eastern part of the country while the other would head towards the western side before eventually meeting in Chennai which will be the culminating point of their journey. 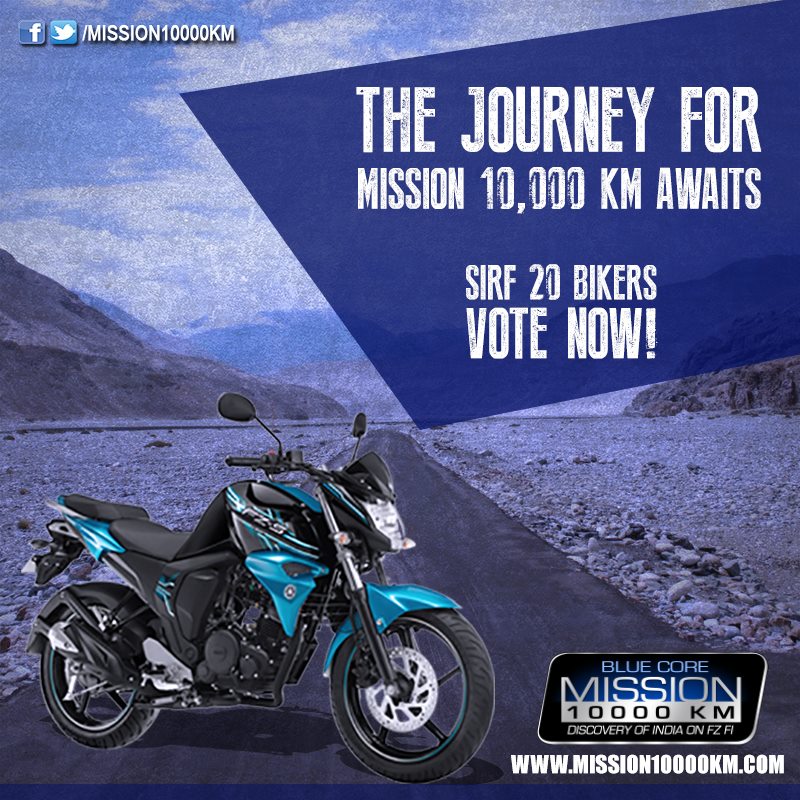 The official theme of the ride is “Discovering a whole new India” and Yamaha India says that it’s an initiative to encourage safe and congenial bike riding across the nation. As mentioned earlier, all riders would be riding the recently launched fuel-injected Yamaha FZ-S version 2.0 during this journey.

Yamaha is also marketing its ‘Blue Core’ technology that supposedly improves the bike’s fuel efficiency and acceleration while also polluting less than other bikes in the segment. The new FZ-S will certainly get tremendous exposure via this expedition which would conclude on the 18th of the next month. It’s a win-win situation, ain’t it?