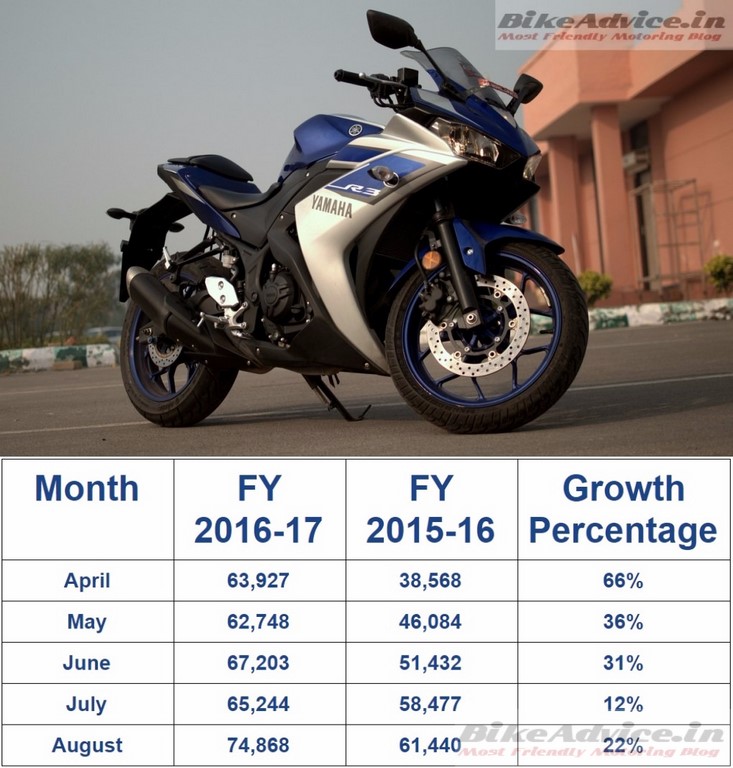 Yamaha India has for the first time in its history, hit the 1 lakh sales mark in a month. They registered a total of 1,01,153 units in September 2016 which also includes export numbers apart from domestic sales. This milestone comes as a major feat for the Japanese brand. If we break it up – Domestic sales stand at 89,423 units while the number for exports are at 11,730 units. In comparison last year Yamaha sold 67,267 units during the same month which infers that they have registered a 33 per cent gain on a year on year basis.

If we talk about cumulative numbers, their total domestic sales stand at 4,23,413 units in the first six months of the financial year. To give you a relative perspective, in comparison, Suzuki has sold 1.23 lakhs till the month of August. Royal Enfield, despite much higher-priced products has been closing on against Yamaha. They sold 3.07 Lakh units in the first half of this year in the domestic market.

Their sales in the 125 cc segment have been encouraging thanks to the Saluto, and the new entry-level Saluto RX is expected to further help them climb. Major emphasis has been on scooters for the last couple of years and it is paying them dividends with Fascino doing pretty well and new Ray ZR expected to gain momentum.

Exports too has been a focus for Yamaha India. The product range is sent to the following countries:

Their new R&D facility will also play a significant role in achieving their targets. They not only plan to produce low-cost models for the Indian market but in the future they have intents of working on global products. Yamaha has also for the first time confirmed the existence of the R15 v3.0.