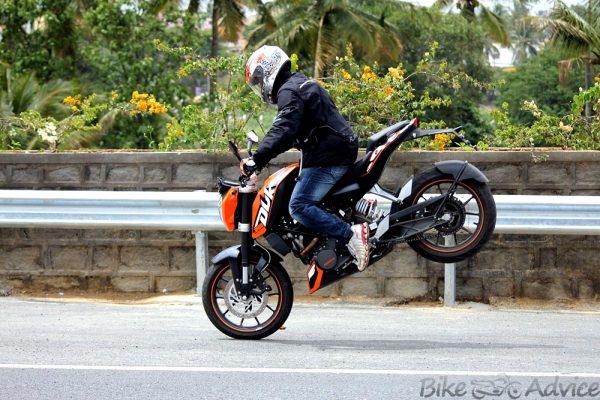 Having barged its way on to the Indian roads, this eccentric-looking bike with an equally queer exhaust note ushered in a watershed event of Indian motorbiking. With the 200 cc fuel-injected, liquid-cooled mill mated to a very short-geared 6-speed claw-shifted tranny, the KTM Duke 200 was too urgent in rushing off the red lights. Built around a trellis frame, and aided by inverted-down forks, it could easily dive into the most challenging of corners. Add to that an upright seating position with a wide, comfy set of handlebars, you get the reason as to why the KTM Duke 200 has attained a cult status on the Urban Indian roads.

The superior mill, and a featherlight kerb weight ensure that the KTM Duke 200 manages to pull off the feat of insane acceleration. However, the cornerstone of this blistering kick-in-the-seat-of-the-pants feeling is the extremely short gearing that the bike has received. It brings more-than-enough zest to the Duke 200 in each gear, and first-timers would probably be caught unawares by the rev-limiter kicking in at a precise 10,500 rpm, even during short salvos of throttle-wide-open.

However, the ultra-short gearing brings along its own baggage. Let aside the difficulty in timing the gearshifts without forcing the rev-guardian into action at 10.5k rpm, the Duke 200 actually seems to run out of breaths (read revs) on long, empty stretches. A Tourer’s Delight?? Not exactly….you can’t really call the KTM Duke a highway mile-muncher! 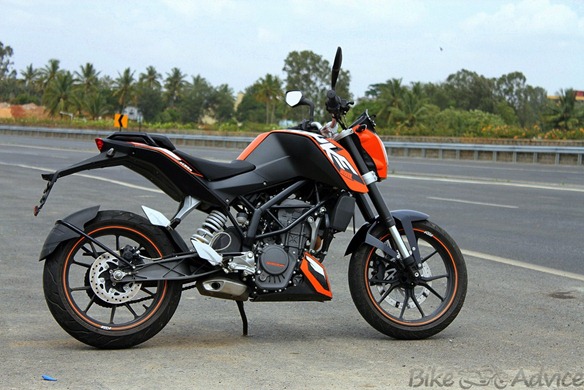 Ask any serious biker worth his Cordura-reinforced jacket, and chances are there that he would reiterate the above viewpoint. And why not? Even we are of the opinion that a taller sixth-cog would have added oodles of practicality to the KTM Duke 200. An already-formidable machine within the city lights, this bike could become a ready-reckoner of a highway tool with the necessary tweaks in the ratios.

A few naysayers feel that these changes would taper the edge off this oddball-of-a-bike, and the fun-factor would have to be sacrificed at the altar of practicality. Nevertheless, word from the industry provides ample clues about KTM’s delving into this issue with probably a taller gear as a replacement. We are slightly more enthusiastic, hence here’s our slightly expanded wishlist :- 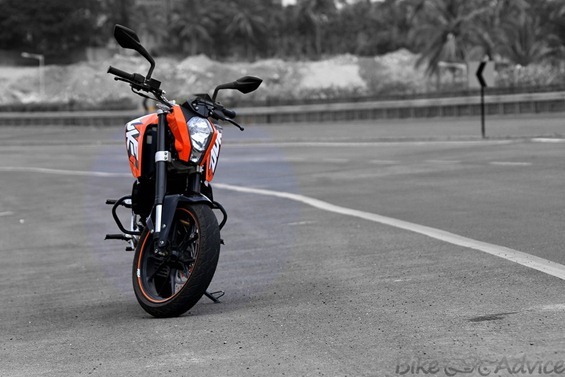 KTM has a wider agenda in hand. As revealed by Stefan Pierer in an exclusive duologue with CycleNews, the Austrian firm harbours ambitions of crossing over to the Adventure/Touring territory. The first offering would be powered by a mill similar, or maybe smaller as compared, to that of the Duke 200. With a kick-ass price-tag, it would definitely entice a lot of buyers who are on the lookout for an inexpensive, nifty yet zesty touring machine.

Next question is, was the Duke 200 we spotted in April testing this specific feature?