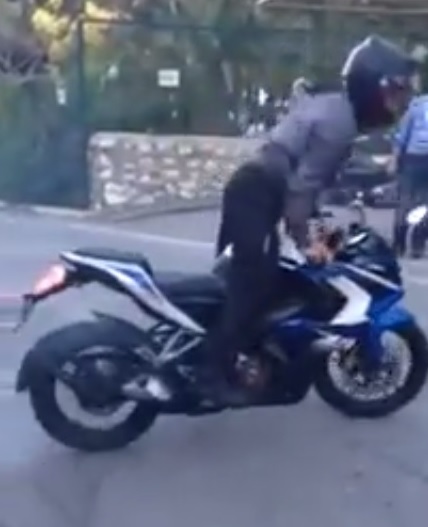 So, a lot of firsts are coming up from Turkey where Bajaj chose to first showcase the upcoming new Pulsar 200SS, company’s first ever fully faired motorcycle.

Apart from the first ever clear pics, which gave us a clear view of how different (or similar) the bike will look against its elder sibling Pulsar 400SS (which Bajaj showcased at the Auto Expo), we have also revealed its power figures exclusively which are higher than our carbed Pulsar 200NS. And now, we have a new video of the motorcycle in action, performing a burnout!

This appears to be around the same location where the official unveiling/showcase of Bajaj’s vehicles took place. First, its Bajaj’s typical way of showcasing and promoting their Pulsars by showing them performing some stunts! Next, we notice the sweet exhaust sound of the motor which, on the video, sounds real nice for a single cylinder engine.

Then, we also get to know that there will be this blue/white dual shade on the motorcycle that will be on offer apart from the yellow/white that we have seen a couple of days back. This video also gives a clear idea on how the interesting tail lamps will look on the motorcycle in real.

The eyebrow pilot lamps are also ON, on this Pulsar, and so is that single projector which appears to be on ‘Low’. We hope, it doesn’t function like Fazer and Bajaj has ensured that both the headlamps can be switched ON simultaneously (at least on the ‘High’ position). And dare we say, it would look awesome with both the eyes and eyebrows lit up…! Eager to see this in flesh!

Recommended: Get Deals on Helmets at Amazon