Sharva has submitted this review in our Ownership Review Contest No 13, ensuring himself an assured prize. The contest also offers a chance to win Riding Jacket, Helmet and more.. You can submit your review to us as well. Here are all the details.

I am just back from a short motorcycle ride around Pune which was truly an exhilarating, adrenaline pumping experience after quite a while. Beautiful tarmac, an enchanting scenery in the backdrop and the iPod queued just the right music which led to yours truly sporting a wide retarded grin inside his helmet. 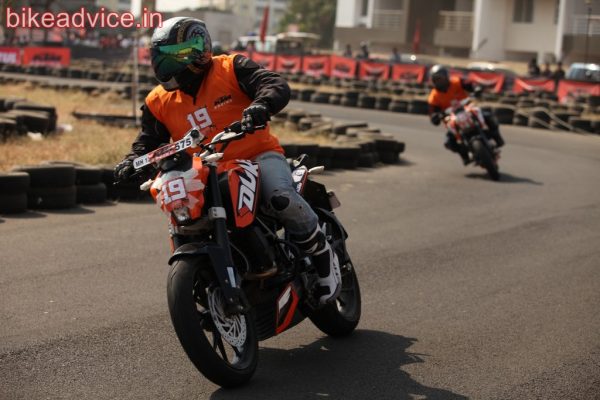 Out of the blue, I felt this strong urge to put this thought on paper, digital in this case, instigate a thought process and enumerate this experience. As I am back home, I have immediately wiped the inch thick layer of dust off my keyboard and have started scribbling. I feel now it would be a good time to introduce the reason for this happiness. It is my motorcycle, a mad KTM 200 Duke.

Donning the orange and carrying it like no one can, the sheer sight of my bike dilates my pupils and plants a smile on my face. What is it about a motorcycle that makes an individual go weak in his knees? It is an inexplicable feeling. Commute bikes, Performance bikes, Scooters, Cruisers, you name it they have it. A billion dollar industry between two wheels which are spaced not more than five feet away simply enthralls me.

I have been following this industry for quite a while now and have worshipped it with all my heart and soul. I believe speed, distance, your mode of transport are all immaterial. What matters is your perspective. For me, it is all about the experience. The sense of satisfaction I get at the end of the journey. The strength that it gives me to go back to sanity. Coming back to one of my most prized possessions, my KTM 200 Duke, there are quite a few ways to describe this bike. Synonymous with terms like premium bike, street fighter, a hooligan and a spitfire, the bike has its own aura surrounding it.

An aggressive yet fascinating design right out of the headquarters of KTM, this Austrian bike manufactured at Chakan near Pune is initially criticized for its appearance and portrayal of a very fragile toy but a second glance at it and the viewer is left in awe of what all this pocket rocket has to offer. On the contrary, I always liked KTM Motorcycles for their experimental design approach and given their longstanding success at the Dakar Rally, I not once thought of the bike to be fragile. It took me quite an effort to convince my folks to get me one of these as they are very much familiar with what the nerdy numbers meant and translated in reality. Add to that, the brochure sporting a picture of a professional not riding with both wheels firmly placed on the road, was just fuel to the fire! 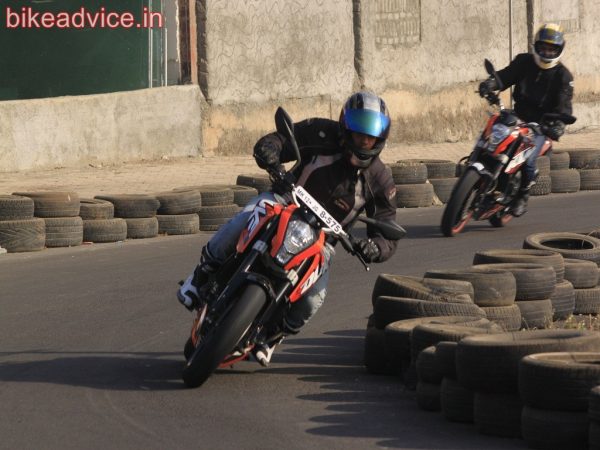 Foot in mouth, petrified and dubiously scared at the end of the test ride, I was sold for that orange bike and all the shortlisted motorcycles took a backseat and the KTM emerged to be the winner. Mind you, the Bajaj Pulsar 200 NS was a strong contender but somehow I thought of it to be too focused and it didn’t tickle my funny bone like the KTM managed to. I knew I won’t show the Hero Impulse the terrain of its liking often, i.e., Dirt so I had to rule it out with a strong heart.

Knowing that the KTM 390 Duke was also to be launched soon, I still settled for the 200 as I knew it would have been a straight NO from my folks. I took the delivery of my bike on an auspicious day according to the Hindu calendar and it is one of the happiest days of my life!The running-in period of the new bike (First 1000kms or First servicing of the bike) hardly took time and was done within a couple of weeks. Some free time, a lot of options for short blasts around town did the trick for me. Post the first servicing of the bike, the bike started showing its true colors whenever asked for it. A surge of power instantaneously delivered on tap somewhat similar to a 2 Stroke Engine is surely a standout feature of the bike.

It is not surprising that KTM’s motto is “Ready To Race”. They mean it. Their products justify this very motto.The word ‘performance’ gets tossed around rather casually these days. And when I consider the big, fast imports, the real ‘superbikes’, I have ridden or know about, it would be rather difficult to use the word in question to describe any motorcycle made in India. But speed is a relative concept, and compared to the commute bikes which scream bloody murder at 80km/h, my KTM hits the same digits on the speedo and it feels as though it’s just about starting to stretch its legs. This gives me an opportunity to mention the speedometer on the KTM 200 Duke. 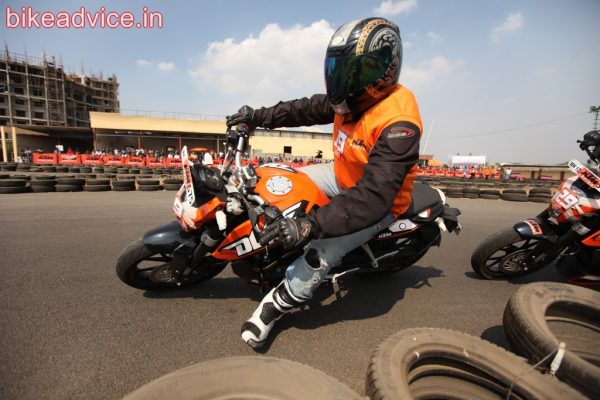 The speedometer console is a nerdalicious affair which shares its design cues with both KTM Motorcycles and Cars. Most of the KTM products share this very same speedometer in varying sizes. It has a lot of information ready on demand to the rider which is easily accessible and can be easily read. There’s also a sensor along with many other sensors which adjusts the brightness of the LCD screen according to the ambient lighting to induce better readability which I feel is a nice gesture. If I may be greedy, overambitious, obnoxious or a little insane, I really miss a stopwatch on the bike with a switch to adjust the same somewhere on the handlebar and lap my timings while out on a track day!

Quite a few times, people including Men in Khakee Uniforms have questioned me as to where be the exhaust of the KTM? Pointing out the underbelly exhaust of the bike is something every KTM owner does if not often, at least once in a while. A very new concept in India, bikes with underbelly exhausts are often misconstrued to have been fitted with aftermarket exhaust systems even today. Crank that beast of an engine and the bike sounds like an asleep dog awakened after being hinted of a treat nearby! The underbelly exhaust also aids in the handling of the bike as there is no weight bias on either side due to it. Also, it’s quite a noisy exhaust which will give you some drools eyes.

The performance from the 199.5cc single cylinder 4-Stroke engine is enough to scare the rookie who asked for the keys for a short spin, satiate the sport riders and plant a wide grin on that avid biker’s face of yours in general!Along with that mad powerhouse and the gearbox comes in an effective braking system with steel braided brake lines by BYBRE and suspension by KTM’s sister concern, WP (White Power) giving you a silky smooth ride. The saddle of the bike took me by surprise by being hard like a rock but it is just a matter of getting used to it as when I got my own bike, it felt just right after the first couple of days! The bike being ultra-lightweight is fun to ride around town or on long rides. However, if you are one of those who is used to riding slightly heavier bikes, you could feel a bit insecure on the highways due to the shredded weight.

Since I was riding a Hero Honda Ambition before the KTM, this was not an issue for me. The MRF front and rear radial tires offer oodles of grip and are made to be a durable yet efficient pair. I have shown my bike a fair bit of track action as well by taking it to the Orange Days organized by KTM in my city. A wonderful event organized worldwide, KTM India has also followed suit giving the ‘Ultimate KTM Owner’ experience to its subjects. My bike was an absolute treat at one of the Orange Days.It helped me grab 2nd place for two consecutive races that increased our bond furthermore.

It packed a lot of fun but demanded to be ridden sideways through corners as much as was possible. Sliding the bike through a corner goes hand in hand with the way the bike has been made, all thanks to the handling dynamics packed in by the monoshock 5 way adjustable suspension, the trellis frame and the aluminum swingarm that gives the rider a lot of feedback and a lot of confidence. The KTM 200 Duke is the most composed bike through a slide that I have ridden till date. Seldom do I feel that the slide can/will go wrong unless I am not being insensible. 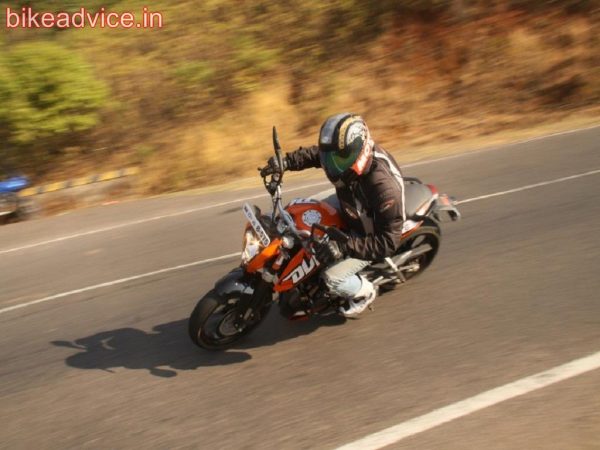 The swingarm is magnificently designed and quite a sight for sore eyes. It sits slyly and when you go round the bike, the first thing you will see is that cast aluminum grey piece of metal connecting the fat 150mm rear tire to the center of the bike. The 150mm MRF tire is the fattest stock tire available from the MRF stable today for the KTM 200 Duke along with Germany based Metzeler 150mm soft compound tire that sports on the 390 Duke. It would be good fun to try out the Metzeler tire on my 200 Duke but that will surely burn a huge hole in my pocket! For the love of sport riding, I havetaken my bike to quite a few short rides to popular hill stations around town and an occasional long ride over weekend.

The bike packs in a lot of fun along with sufficient power and a good mileage. Although a slightly bigger fuel tank would have been appreciated to enhance the sport touring characteristic of the bike with lesser fuel stops. Coming to the important bit of mileage, the bike returns a decent 30km/pl in the city and 38km/pl on the highway giving it an impressive overall mileage figure of 34km/pl which ensures a 357kms range from the 10.5 liters fuel tank! Every coin has two sides. The list is endless. Here are some of the cheers and sneers of the KTM 200 Duke that I have shortlisted.

So would I reckon that you should also buy this bike? The answer is yes. The KTM brand has a formidable history to its credit and the legacy is sure to continue. Would you not like to be a part of it? The KTM 200 Duke is an all-in-one package made to cater to every biker itch that you get;May it be your everyday bike to work and back home, a short blastor a long ride over the weekend.A decent fuel economy which won’t set you back by the fuel bills, zero to low maintenance cost along with efficient service assistance and the KTM 200 Duke sure makes sense with the changing times. If you are one of those who feels that the KTM 390 Duke is a bit too much for your personality, the KTM 200 Duke is just the right bike for you.