At the Auto Expo, what Bajaj displayed was something of major interest to almost all the biking aficionados of our country. The unveiling of CS400 & SS400 twins was Bajaj’s way of taking all the hoglight from everyone else. 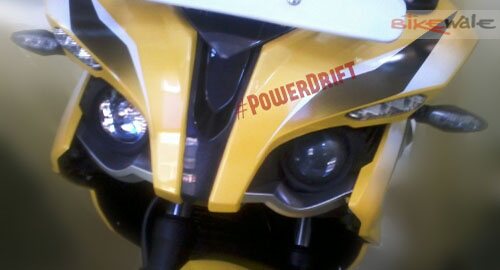 Nonetheless, what left everyone puzzled was the absence of Pulsar SS200. In an interesting development, we have a frontal shot of a Pulsar which is claimed to be the upcoming Pulsar SS200 courtesy Bikewale.com. At the first glance, there doesn’t appear to be a zilch of a change as everything seems so similar, including the colour.

However, comparing pics of the Pulsar SS400 (below) we have with the spyshot above, we get a couple of minuscule changes.

Rest of everything appears to be very similar to what we have seen including the projector headlamps, pointed visor, LED pilot lamps, silver coloured headlamp underlines, two-tone fairing front and regular telescopic shock absorbers.

This brings us to the most important point! The spyshot we have in this pic carries the number plate. This gives us a possible hint at the ‘completeness’ of the product. Usually the number plate is placed on bikes which are all ready! Does this mean, Bajaj is all set to launch it in the market soon, very soon?

With what has been known so far, Pulsar SS200 will come with the same 199.5cc liquid cooled single cylinder engine but against a carburettor in the Pulsar NS200, it will feature a Fuel Injection unit. Moreover, there is also an expectation of slight bump in power from the current 23.52PS.

We have seen spyshots of Bajaj’s faired Pulsar mules sporting ABS ring. Now, since they were camouflaged, we can not say with conviction what capacity mules they were. But we do see ABS being offered on the SS200 as an option.