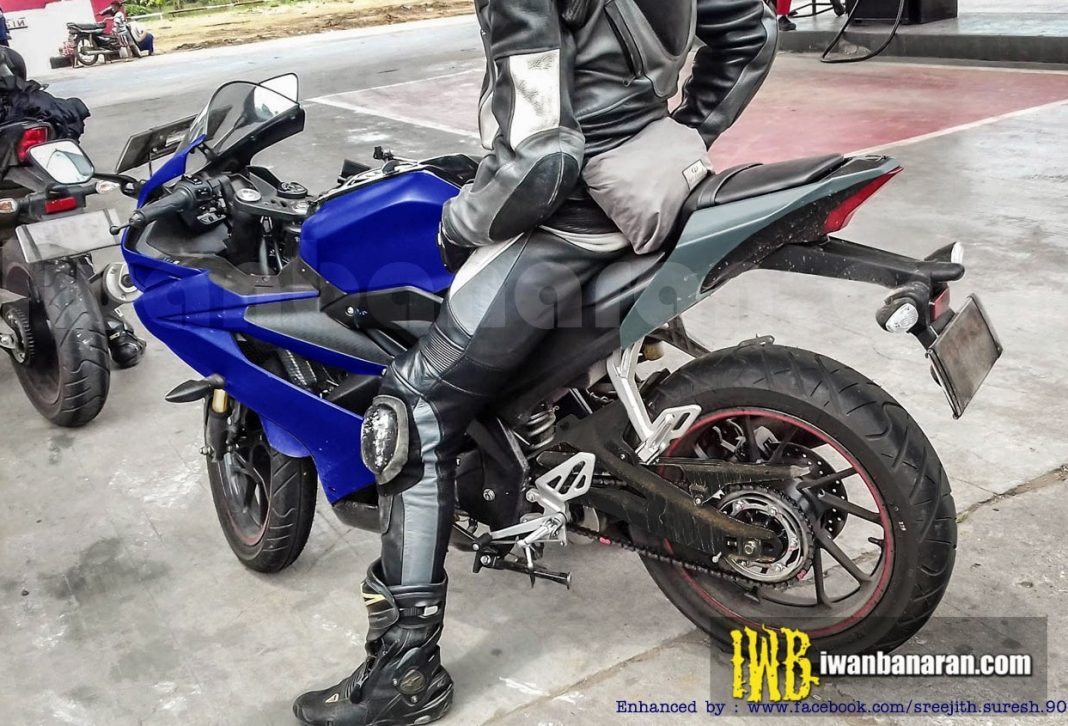 a. Iwanbanaran has spotted the R15 v3 at some petrol pump and has posted its images on their website. The following one is probably the best resolution pic available on the internet, however we would have liked a better angle.

b. One of our reader Sreejith has enhanced one of the spy pic to give a better view of the motorcycle in blue and grey dual tone livery. It is inserted after the following original pic… 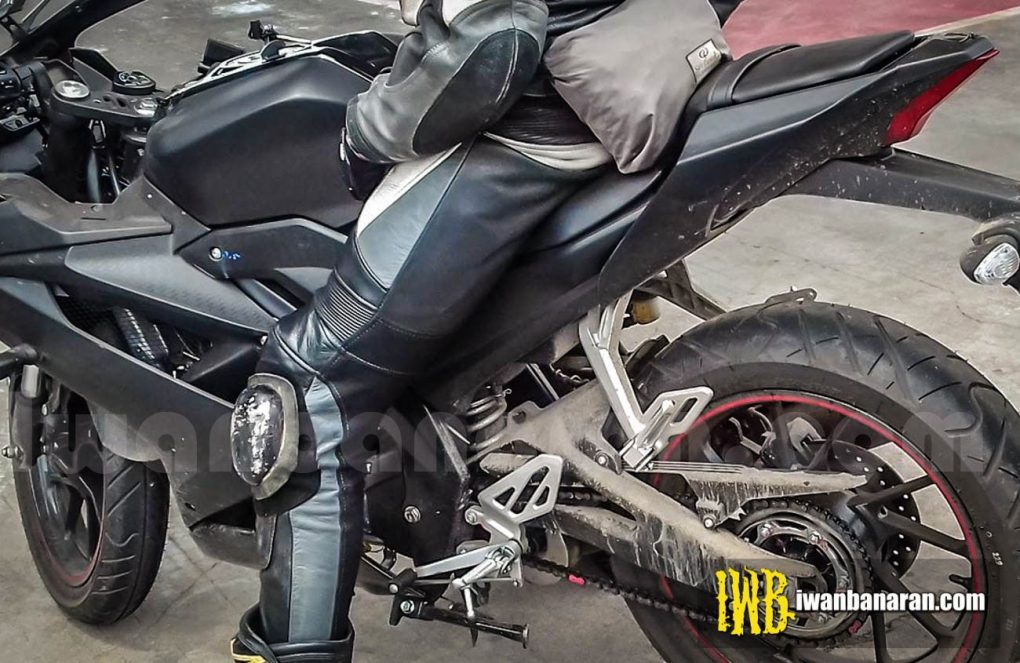 R15 v3, which was getting revealed bit by bit, has been spotted in entirety and it appears that Yamaha is out for vengeance! There are two black test mules pictured here in these pics sourced from M-Slaz Club Thailand. The riders appear to have taken a break to save themselves from the downpour. 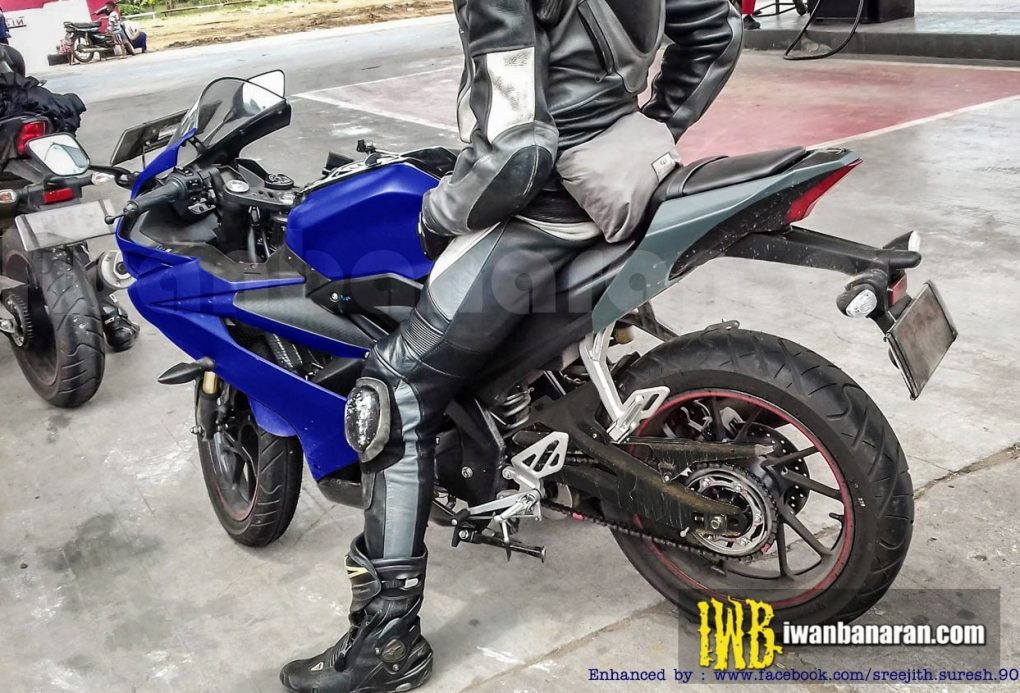 Against what we thought initially when we did not have the complete picture, the version 3 of R15 is a comprehensively re-designed motorcycle. There is a bigger chiselled tank and the fairing also gets its share of changes. But it is the angry face which is the most attractive part of the motorcycle. Yamaha will be accused of taking inspiration from the beauty Honda CBR 600RR but there are a lot of elements which scream exclusivity. 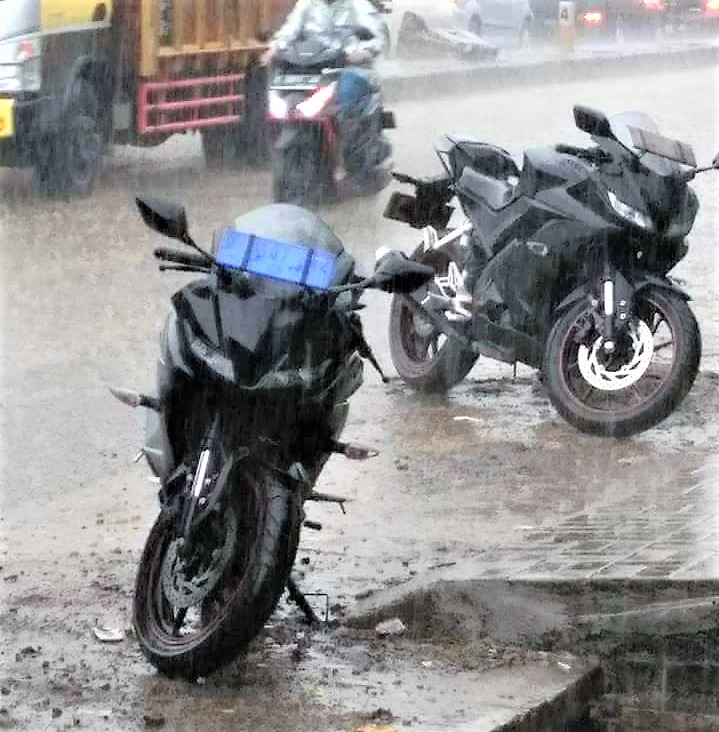 The dual split head lamps are narrower and have a big air dam in between. Whether the air dam is functional (for such a small capacity motorcycle) or merely a design element is not known at the moment. The motorcycle, clearly has been designed with ‘heart’ and for some reason it also appears to be slightly bigger. Going by what we see, it could easily run a 200+ cc engine with the body ably supporting the body-size expectations. 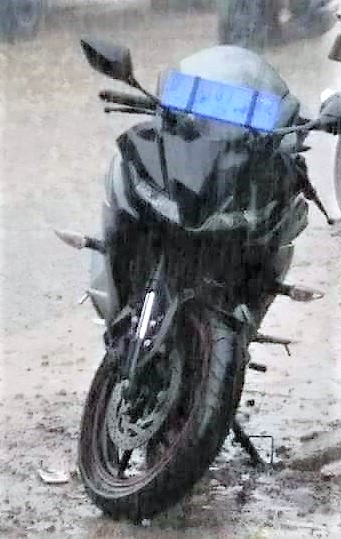 There are (at least) two test mules on the roads which hint at the possibility of two or more tunes/parts/variants on test. We do not see ABS rings on both these motorcycles and a few parts like the handlebar grips, side blinkers etc are taken from the current R15’s bin.

It appears that Indonesia will be the first market to get the new R15 which is officially revealed by an Indian management guy to be more powerful and safer (link to report)! After setting foot in the Indian scooter segment, Yamaha is warming up with their motorcycle plans – onslaught of which will begin with the upcoming ~250cc FZ25 (launch on 24th Jan), followed by the new R15 v3 which we expect will be launched towards the middle of this year.