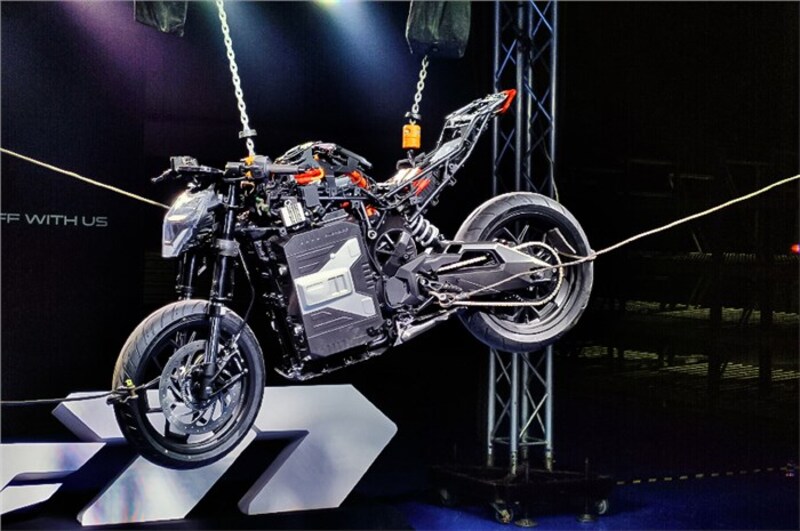 So, yesterday (October 18) Ultraviolette hosted a small event to showcase and reveal some new details of their upcoming performance electric bike – F77.

Ahead of the official launch of the F77 on November 24, the TVS-backed manufacturer has announced that the pre-booking for their new performance electric bike will commence from October 23.

We have previously reported that Ultraviolette have brought many improvements to their F77 electric bike since its showcase in 2019. It was back in February 2022 when the Bengaluru-based startup shared that the new bike will have a claimed range of 200 km.

Fast-forward 8 months and Ultraviolette have hosted a small briefing event where they have very confidently showcase the upcoming electric bike and have revealed many details regarding the battery and range of the new F77.

The company has shared that the F77 has received many significant changes since its last showcase in 2019.

Gone is the removable battery tech – the new F77 will sport a new & bigger non-removable battery pack which will offer a claimed range of 307 km (IDC). The new battery pack is constructed out of Aluminium and will pack 21,700 Li-ion cells instead of the previous 18,650 cells. This increase translates to a usable capacity of 10.5 kWh on the top-spec Ultraviolette F77 – making it the largest battery pack among all electric two-wheelers in India.

The decision to go for a non-removal system and a bigger battery pack is to improve the range of the electric bike significantly. Ultraviolette revealed that, as of last week, the F77 was able to achieve an Indian Driving Cycle (IDC) range of 307 km on a single charge.

Furthermore, the company has promised that they will continue their work to further improve the efficiency and range of their machine.

The F77 has received many significant changes in order to facilitate a bigger and non-removable battery system. Many of these changes were meant to be incorporated in the Gen-2 of the machine which was destined for a 2020 launch, However, the pandemic gave them the opportunity to incorporate these updates in this machine itself.

The significant changes include a complete redesign of the chassis – it now comprises a spine section that joins the headstock to the load-bearing motor mount and the frame itself is two times stiffer than the old frame. The non-removable battery pack hangs below the spine and, as the company has emphasised, they have worked extensively on ensuring effective heat management of the battery pack using passive air-cooling.

At the event, Ultraviolette also showcased the production-spec F77, sans the bodywork. It revealed the chassis in its entirety-complete with USD forks at the front and a monoshock at the rear, both of which are pre-load adjustable.

As for some of the features on the bike, the production-spec F77 will have 3 ride modes and riders can choose between different levels of regeneration to suit his/her riding style.

Lastly, coming to the important bit – prospective customers can reserve the new Ultraviolette F77 at a token booking amount of Rs. 10,000/- starting October 23.

Ultraviolette revealed that the battery pack will come with 3 years of warranty as standard, with an option for extension afterwards.

The sale of the F77 electric motorcycle will be through online channels only with plans for offline retail sales in the future. The company will only be able to meet production target of 15,000 units in the first year with production aimed to ramp up to 1,00,000 units in coming years.