Air pollution can be defined as an addition of any material which will have a deleterious effect on life upon the earth. Air pollution is increasing drastically with increase in number of vehicles, specially two wheelers, because they are the most economic way of transport in India. Increase in air pollution is obviously resulted from various types of emissions generated from vehicles’ engines. Basically, petrol engine emissions are divided into three categories as exhaust emission, evaporative emission and crank case emission. The major constituents which contribute to air pollution are Carbon Monoxide (CO), Oxides of Nitrogen (NOx) and Hydrocarbon (HC) coming out from petrol engine exhaust. The percentages of different constituents coming out from the above three mentioned sources are shown in figure. 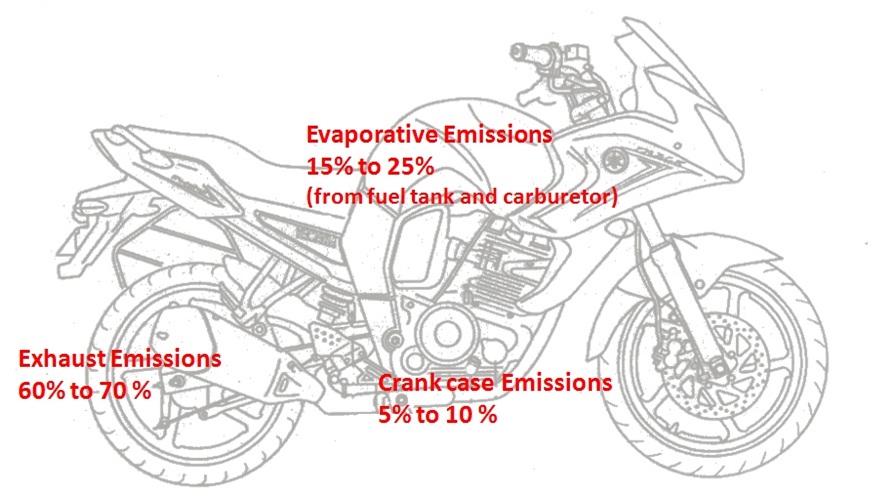 Let us discuss some facts about above mentioned emissions, causes and factors affecting the emission.

Theoretically, if the combustion in the combustion chamber is complete, the exhaust will contain only carbon dioxide (CO2) and water vapour (H2O). But when the fuel quantity supplied is more, there is no sufficient oxygen available for complete combustion and part of the carbon converts into CO. Whereas, fuel quantity supplied is less, excess oxygen is made available to react with nitrogen which results in formation of NO. The different constituents which are exhausted from petrol engine and different factors which affect the formation are discussed below.

The unburnt hydrocarbon emission is the direct result of incomplete combustion. The emission amount of HC is closely related to design variables like breathing system design and combustion chamber design, which we can’t change. The operating variables like air-fuel ratio, speed and load are the factors which we can control to reduce HC emission. Other maintenance variables which affect the HC emissions comprise engine wear, lubricating oil level, cooling efficiency and carbon deposits on cylinder wall. These factors are indirectly affecting the HC emission and we can reduce their effects by practicing regular and proper maintenance of our vehicle.

Carbon monoxide, being an intermediate product of combustion, comes out in the exhaust gas if the oxidation of CO to CO2 is not complete.  Theoretically, it can be said that the petrol engine exhaust can be made free from CO by operating it at correct air-fuel ratio which is 15:1. However, it’s never possible to supply the fresh charge with this proportion. So mixture always remains rich or lean with fuel and it’s not possible to avoid HC emission. The only way to control the HC emission is by controlling speed. CO emission is high during idling and reach maximum during deceleration. It is lowest during acceleration and at high steady speeds. Deceleration from high speed produces highest CO because of reduced supply of oxygen.

The lead is present in the fuel as lead is used to control the self ignition tendency of fresh charge. Self ignition tendency decides the knocking characteristics of the engine. In simple language, it is known as octane rating of the fuel. Most of the lead that enters the engine is emitted from the exhaust to form very small particles of oxides in the atmosphere.  A portion of the lead particles falls to the ground very quickly; others are small enough to remain suspended in the atmosphere for some time. The largest fraction of all man-made emissions of the lead into atmosphere comes from vehicles. It would be impossible to eliminate lead completely from all petrol, because lead also serves the purpose of lubrication to prevent rapid wear of exhaust valve seats.

Petrol evaporates quickly while kept open to the atmosphere and forms unburned hydrocarbons. There are mainly two sources of evaporative emissions in the vehicle, the fuel tank and carburettor. The major factors leading the tank emissions are fuel volatility and ambient temperature. Though fuel tanks are provided with air-tight seals, it’s nearer to impossible to avoid evaporation of petrol from the tank. Proper insulation of fuel tank would be the solution to reduce the tank emission. Indian bikes are still waiting for vapour collection system in the fuel tanks which plays major roll in reducing tank emission.

It consists of engine blow by gases and crank case lubricant fumes. The blow by gases is the phenomenon of leakage past the piston from the cylinder to the crank case because of pressure difference. Worn out piston rings are mainly responsible for this blow by. As working temperature of engine increases, lubricating oil also starts evaporation. This vapour formation from the lubricating oil is known as lubricant fumes. Both these partly evaporated gases hold high concentration of HC and CO. Nowadays, EGR system is used to eliminate the crankcase emission but it also has some limitations because of which crankcase emission is difficult to diminish.

As we have seen that the different pollutants emitted from petrol engine are HC, CO, NOx and lead. All these are injurious to human life if their concentration exceeds a particular limit and they remains in the atmosphere for a long time. Let’s discuss some of the effects from different pollutants.

Carbon monoxide (CO) causes headache, nausea, dizziness, permanent visionary damage, coma and even death. CO has 200 times more affinity with blood than oxygen and is very quickly absorbed in the body causing extensive damage. CO particularly dangerous because of its high toxicity and ability to tightly bind itself to the haemoglobin in blood is preference to oxygen. Carboxy haemoglobin formed by absorption of CO by blood is useless as a carrier of oxygen. CO can remove oxygen form haemoglobin and causes asphyxiation. Individuals with weak hearts are placed under additional strain by the presence of CO in their blood.

Nitrogen Oxides (NOx) damages the crops. NOx has tendency to change tissue in lungs, heart, liver and kidney in monkeys. It is highly hazardous to public health.

Lead has no known metabolic function in the human system and is known to be poisonous at sufficient high concentration. Present opinion seems to be that adults are not at risk, but children may be. High lead level in the bloodstream of children causes low mental attainment and learning disorders.

I hope you all are contributing to keep our environment clean and emission free. Leave your valuable suggestions and comments. Keep Green, Drive Green and Live Green…